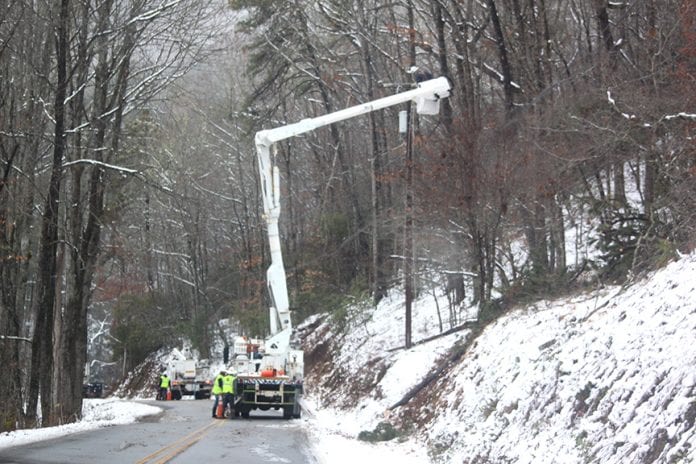 In a range between two and 12 inches, heavy, wet snow brought down trees and power lines across the Franklin, Highlands and Scaly Mountain area, knocking out power to about 25 percent of the county.

“They had trees falling faster than they could keep up with it,” Macon County Emergency Services director Warren Cabe said of Duke Energy’s battle to restore power to the hardest hit parts of the county. Cabe reported considerable damage to the Old Murphy Road area affecting utilities, and area-wide outages in Holly Springs and north of Franklin.

“It was actually fairly uneventful other than the power outages and the fallen trees,” said Cabe. “Our citizens have fared really well.”

EMS conducted 14 welfare checks as of Tuesday, dispatching personnel to check on individuals who could not be reached by family.

In every case, the person in question was safe, with one man requiring assistance lighting a gas fireplace. “That’s OK, 911 is for people that need help,” Cabe said.

Seven homeless individuals were rehoused with help from Macon New Beginnings. However, Cabe said no emergency shelters were opened, unlike Buncombe and Henderson counties, which reported 23 individuals in shelters.

Cabe said citizens’ preparedness could be attributed to the five to seven days’ warning and accurate forecasts.

Duke reported that nearly 9,000 personnel were activated to respond to the outages of 170,000 customers statewide, with Macon and Jackson counties being among the hardest hit.

Cabe said more than 8,000 residents and 200 businesses this year received texts or emails via EMS’s “Code Red” program, a so-called “reverse 911” program where automatic texts are sent to residents who have signed up.

The messages included winter weather warnings Friday and Saturday. Town of Highlands residents were also notified of outages in their area.