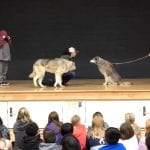 Rob Gudger and his wolves recently paid a visit to the fifth grade students at Mountain View Intermediate School (MVI). Gudger uses his gray wolves in environmental education presentations. The program was made possible with the help of 5th grade teacher Lori Castner who has incorporated the book “Julie of the Wolves” into her English Language Arts class, because a group of students expressed an interest in wolves. The district STEM coordinator, Jennifer Love, worked out the details to get the Bob Gudger’s “Wolf Tales” to present to the entire 5th grade.
Gudger has been handling wolves for more than 33 years and wants people to better understand them, because he believes they have been very misunderstood over the years. Wolves have a reputation as being vicious killers, dangerous, and always on the prowl. Some people think of them as basically dogs, just in need of a little taming. Both concepts are wrong, explains Gudger. His presentation provided great insight into this predator as he shared multiple facts about them.
Wolves are a dogs ancestors. Dogs were probably domesticated by accident, when wolves began trailing ancient hunter-gatherers to snack on their garbage. Docile wolves may have been slipped extra food scraps, the theory goes, so they survived better, and passed on their genes. Eventually, these friendly wolves evolved into dogs. The gray wolf lives today in a diverse range of environments, including tundra, mountain areas, woodlands, forests, grasslands and deserts. An estimated 7,000 wolves live in Alaska. About 5,000 gray wolves inhabit the lower 48 states, more in Idaho, Michigan, Minnesota, Montana, Wisconsin and Wyoming.
Gudger shared other fun facts:
– Wolves do not carry fleas.
– They have 4,500 lbs. of bite force.
– Unlike coyotes, they are timid and scared of people.
– They always stay together in a pack, the oldest wolf at the front of the pack to set the pace.
– Gudger collects the wolves’ fur for weavers and spinners to use, as it is thick and warm.
– His wolves eat 10 lbs. each of chicken leg sections, once per week, to mimic how they would eat in the wild.
– He has three wolves in his pack and they are socialized, but not domesticated.
The wolves do not live inside Gudger’s Haywood County home, rather, they live outside. They do not come when their names are called, and though they are a part of the canine family, they are different than dogs. When folks ask Gudger if they are trained he explains that they are not trained but they are socialized. “You really can’t train wolves” he says. They don’t take orders or come when called but they are predictable in their behavior. Gudger has three wolves right now and is planning to get a pup soon. Wolves live to be between 10 and 12 years old.
The students at MVI had the opportunity to pet the wolves and give belly rubs as they left, and some of the teachers even got the opportunity to walk the wolves around. The four girls that consider themselves the “wolf pack” at MVI described their experience interacting with the wolves.
“My emotions were shooting out, I wanted to go up on stage with the handlers,” Kaylee Toneges remarked. “We were told not to be too loud. One of the wolves actually licked my hand which means he was welcoming me into the pack.”
Olivia Holcomb explained, “I felt very emotional, I touched one and it felt soft, the deeper I felt the softer the fur felt, it was rougher on top.”
Keefer also added, “OMG I really wish I had been up there with the handlers, I was trying to make the wolves howl.”
Alisa Hamlin says, “I was so excited to get to see and touch the wolves.”
“Having the wolves at school gave the students a hands-on learning experience that directly aligned with the ecosystem standards, as it touches on food chains. They are one of the main apex predators (which is an alpha predator at the top of the food chain), they have no natural predators, in the forest and arctic biomes,” said Jillian View, MVI Science and Math Teacher.