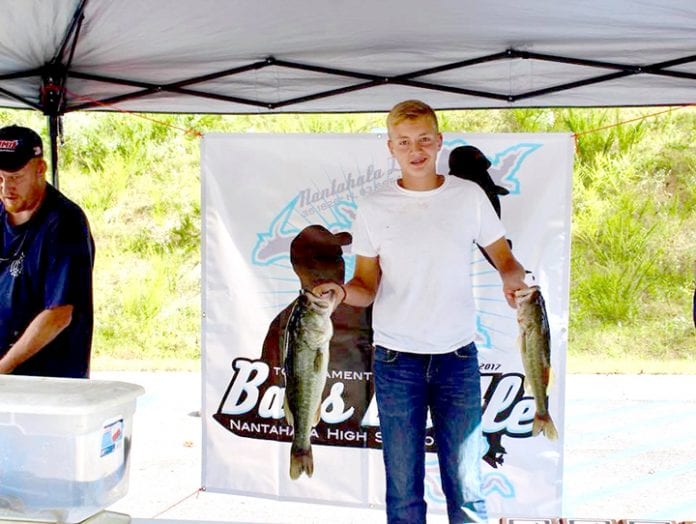 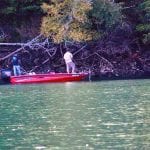 Nantahala School held its second annual Bass Battle Fundraiser, on Saturday Sept. 29, on Nantahala Lake.  Nantahala School has a total population of 83 students ranging from grades K-12, one of only three K-12 schools in the state. This fundraiser will help pay for the junior/senior week long field trip this year. Fourteen students in the junior/senior class will be attending this trip at the end of the school year. Although a destination has not yet been determined, the cost of other trips from past years ranged in the vicinity of $600 per student.

Approximately 25 participants enrolled in the Bass Battle this year. The teams were composed of father/ son, grandfather/ grandson and several individual contestants.  The boats showed up on the water early that morning with a sunny forecast and cool weather on the horizon. With fishing poles and nets in place, the fun began.  Teams began catching the fish early on and by afternoon the weigh-in took place.

Josh and Zac Taylor were the winning team who caught a whopping 11.82 lbs. of bass. The Runner up was Max and Justin Raxter  with an impressive catch of 11 lbs. Honorable mention goes to the following contestants:

This event could not have taken place were it not for the sponsors. The following businesses offered support of this fundraising event:

The Preserve Farm at Little Choga

Sausage biscuits and coffee were served in the morning and then hot dogs and BBQ plates were served up in the afternoon. Raffle tickets for various items were also sold. Nantahala raised $1,200 after paying out all expenses.

NHC working to get trails in usable shape; volunteers needed