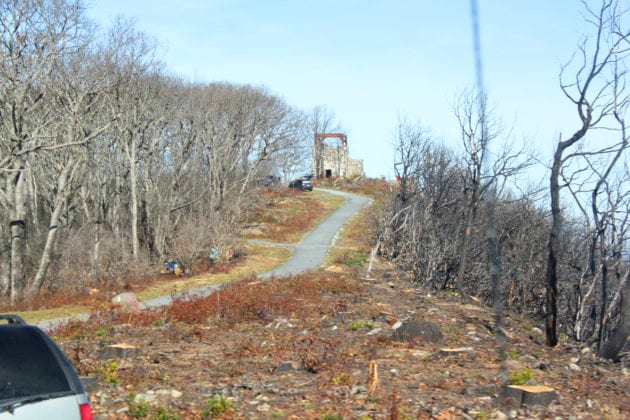 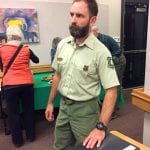 Brian Browning of the United States Forest Service (USFS) was the guest speaker at the Nov. 9th Nantahala Hiking Club meeting. Browning spoke to a full house at the Macon County Public Library about the details of the unprecedented fall 2016 fires – and what was gleaned from that experience.

Although conditions from spring 2016 to fall 2016 went from “abnormally dry” to “exceptional drought,” nothing as calamitous as what occurred primarily within the months of October and November was expected. 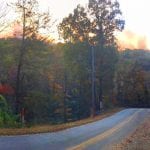 The first statewide master forest service plan was developed in 1955 due to 600,000 acres burned in Hyde, Washington, and Tyrrell counties from a single fire, according to NCFS. In 2008, those same counties experienced 40,704 acres burned. However, Browning cannot recall a historic fire event in the Western North Carolina mountains comparable to that of the 2016 fires.

He shared that the National Forest in North Carolina includes 1.2 million acres and employs 200-plus.

Many of the fires that began on Oct. 23, with the Dick Creek Fire that burned 727 acres in the Sylva area (and new fires igniting just about every day well into November) smoldered all the way into January 2017. Browning, who graduated from Franklin High School, said that local resources were sent to one fire after another until too many were occurring. By the time the Knob Fire ignited on Nov. 1, there were little-to-no resources to send. On Nov. 3, a Type 1 Incident Management Team was assembled to determine the logistical aspects of pulling together resources for what is deemed a “complex incident.” On Nov. 8, a state of emergency involving fire safety and air quality was declared in Macon County. It was not lifted until early December.

“The terrain was terrible,” said Browning, “… rugged, remote, and very difficult to get to.” Some fires took days or weeks to contain. One of the largest was named the Tellico Fire, which alone burned 13,880 acres. There, said Browning, at least 400 homes were in danger of burning.

All fires during fall 2016 were considered to have been “human caused.” Fortunately, throughout the entire ordeal, only one unoccupied, non-permanent resident home was burned. Wayah Bald Fire Tower, however, burned. Yet, no lives were lost in Macon County.

Millions were spent on air support, equipment, skilled crews, and other resources. Browning said when the “work horse” sky crane helicopter showed up on Oct. 28, everyone understood the seriousness of the fires. “It doesn’t come unless things are very serious,” he said, explaining that the helicopter holds more than 2,000 gallons of water, which is drawn out of lakes.  “It was the first time I ever saw one show up in the East.”

Ambulances from other parts of North Carolina and from other states were driven into the area so that there could be additional vehicles stationed near every fire. Overall fire support came from 30 states.

Volunteers in droves provided food and other donations. Children drew pictures and made signs to give to workers. Businesses displayed support messages. Although there were too many organizations and individuals to name, Browning mentioned North Carolina Baptist Men, who came to Franklin and set up a kitchen from which to feed all fire fighters and support team members. “The support from communities was tremendous.”

He added, “A tremendous amount of effort went into fighting these fires. Typically fires can be handled, but these were too many too quickly.” Browning showed a satellite image of Franklin taken during the fires; the town is completely surrounded by smoke, and evidence of at least a dozen active fires is visible.

When it was all over, thousands of acres in North Carolina, but also in Georgia, South Carolina, and Tennessee had burned. Yet, while the fires primarily depleted landscape and turned thriving forests to ash, the worst human and property loss would occur in Gatlinburg, Tenn. Reported Wildfire Today in 2016: “On Monday, Dec. 5, the Incident Management Team (IMT) on the Chimney Tops 2 Fire that burned from Great Smoky Mountains National Park (GRSM) into the Gatlinburg area reported that it has caused the deaths of 14 people. Over 130 sustained injuries, and 1,684 structures have been damaged or destroyed. Approximately 14,000 residents were originally forced to evacuate.”

Rain relief came lightly on Nov. 23 then heavy on Nov. 28, but the precipitation reached Macon County before Gatlinburg, which was initially hit with high winds that only exacerbated fire conditions.

In hindsight, Browning conveyed that some factors needed to be “re-thought” – primarily earlier attention to and planning when there are extremely dry conditions.  “But overall, the team did a tremendous job,” he said. “Everyone went above and beyond, even the volunteer fire fighters. The list of who stepped up to help in this time of need is enormous.”