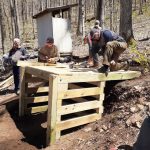 Volunteers have been busy this spring replacing outdated privies on the Appalachian Trail.

The word “privy” dates back to the 12th century, according to Oxford English Dictionary. It essentially means “a private place,” and is considered the polite, but out-of-fashion term, for “toilet” or “bathroom.”

Section, thru-, and day-hikers on the Appalachian Trail (AT) do not always have to duck behind a tree to answer the call of nature. Typically, a privy is in close proximity to a shelter. And the Nantahala Hiking Club (NHC) is responsible for 10 privies on the 58.6 miles of the AT that its volunteers maintain from Bly Gap at the Georgia/North Carolina border to the Nantahala Outdoor Center on the Nantahala River at Wesser, N.C.

Rich Corporon, trail manager for the NHC, has worked on three privies during his time with NHC. Recently, he and Ed Sams, along with about 15 club members, completed a privy at Rock Gap. Sams designed the privy.

“He worked in parks and forestry for his career, so he’s very knowledgeable about construction,” said Corporon. “Even though it might be near impossible to get a wheelchair to this privy, the design had to adhere to the ADA [Americans With Disabilities Act] regulations since it is on U.S. Forest Service land. It had to have grab rails and be wheelchair accessible.”

While many privies are located relatively far from a parking lot, the one at Rock Gap is about a tenth of a mile from a parking lot. Corporon explained that supplies, including 4 by 5 foot treated wood boards, plywood, and metal sheets, had to be carried near the site of the existing privy, which will eventually be torn down.

“NHC Maintainers put in about 240 hours on this between construction, work on the site, and work on the area around it,” said Corporon. “The base of it, called cribbing, is 4 by 6 treated wood stacked Lincoln-log style so the air can circulate. And it has plywood walls and a metal roof. We worked on it for two afternoons for about 12 hours doing pre-fabrication, and then we spent a few days of site preparation, digging etc., and then three days working on site. It takes a while to build things in the woods.”

The new privy opened during the first part of May and was funded by the Appalachian Trail Conservancy.

While constructing it, Corporon said the volunteers met many appreciative hikers.

“Privies are a wonderful thing,” he pointed out. “We keep leaf buckets in the privies and hikers throw a handful of leaves so the waste composts the way it’s supposed to. Each privy has two seats, and we keep one seat open at a time so the other side can compost.”

Reported Appalachian Trail History: “One of the most important features of the Appalachian Trail shelters are the shelter privies (outhouses). Almost every one of the more than 200 shelters along the Trail has its own privy and the availability of these facilities is a major attraction for hikers passing by or planning to stop for the night. Having such facilities at the shelters also helps to minimize the human impact along the Trail, because the privies concentrate the depositing of human waste in just a few locations. The original trail privies were all pit toilets and many of those older pit-style privies remain. But over time much more eco-friendly versions have been developed by the various trail maintaining clubs.”

Two other privy construction projects on the AT will take place this year: Cold Springs and Wesser.

“Those are farther off the trail,” said Corporon. “When we did the Standing Indian privy a few years ago, Back Country Horsemen of North Carolina used horses and mules to carry materials to the privy area for us. We’ve even had helicopters drop materials for us in the past as well. We can only carry so much so far, especially if the privy is miles away.”

Newly-formed cooking club takes off with dozens of members