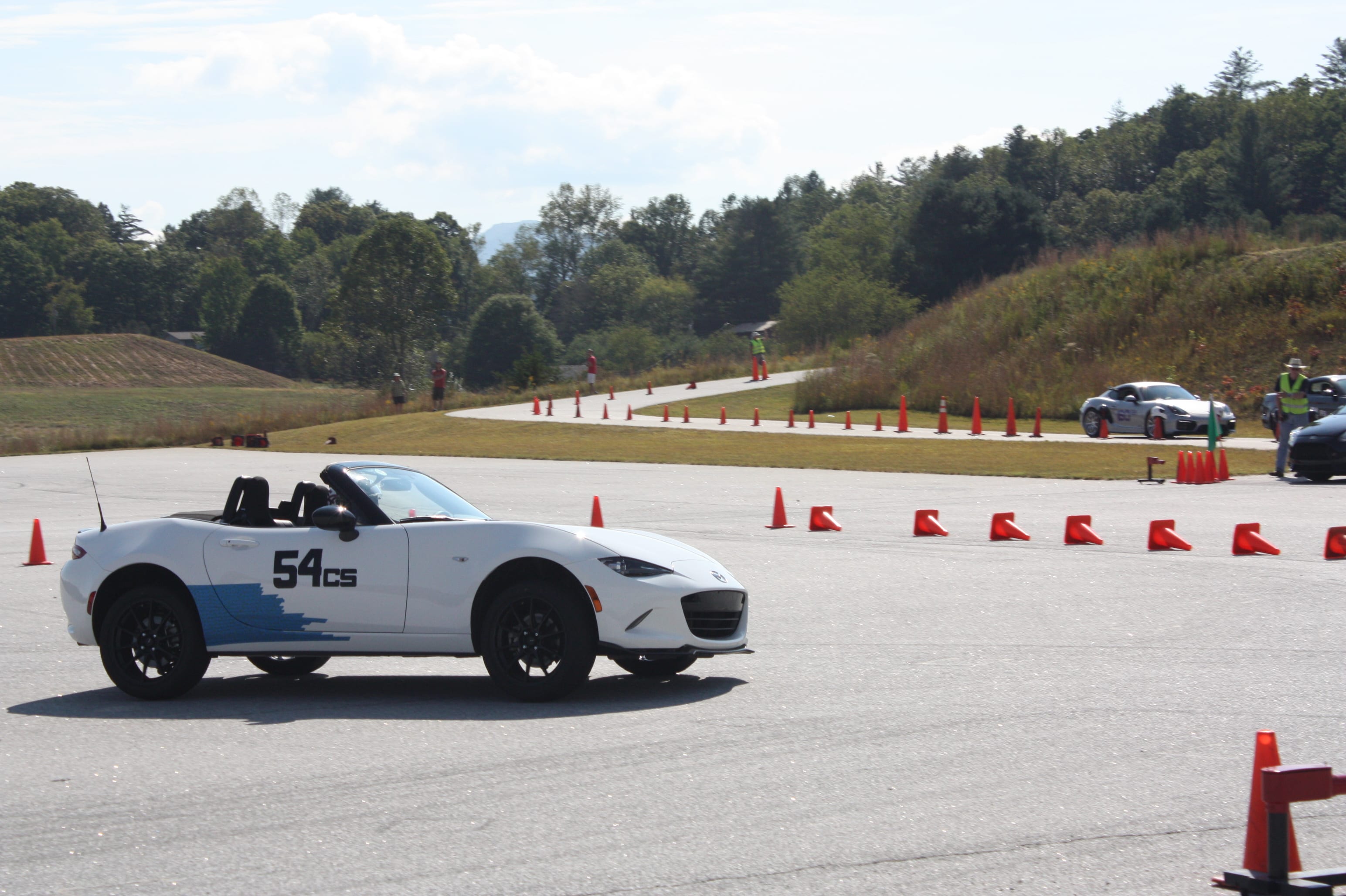 The Highlands Sports Car Club of Asheville hosted the 2016 North Carolina Autocross Championships in Franklin on Saturday and Sunday, Oct. 1-2.  The event drew more than 100 enthusiastic participants from all over North Carolina, as well as some contestants from Tennessee, Georgia and Virginia.

The competition took place at the Jerry Sutton Public Safety Training Center on Industrial Park Road, off Highway 64W.  Most commonly, this area is known as the place where people are tested for motorcycle licenses, and as the vehicle training ground for law enforcement and National Park Service candidates. The rental fee the club pays to use the facility goes directly into a scholarship fund for students who come to Southwestern Community College for the National Park Service law enforcement training.

The Autocross is an event with one car at a time precision driving on a miniature road course marked by rubber cones in a large parking lot or other paved area.  The drivers were not allowed practice runs, but every driver had six runs on the course.  The first run is a cold run for all drivers ― no pre-race practice for the cars, although the drivers may walk through the course before the racing begins.

Each morning about 7 a.m., Autocross chairman Erich Baumgartner and his crew were at the Industrial Park setting up for the day’s competition.  As the chairman,  Baumgartner is responsible for all things that make the day run smoothly.  He has to secure the property and handle the rental, have people there to act as track spotters, be sure the timing equipment and timers are present, and even the porta-potty rental.  The design layout and course set up is the final step.  Each day the course is different so the drivers get a fresh run at the track.

According to one of the club members, “A sports car is any car driven in a sporting manner,” and the assortment of cars participating was represented by pretty much any automobile class available from a Lincoln to Mini Coopers and everything in between.  A few of the autos there were the more commonly known Mustangs, Camaros, Hondas, BMWs, Mazda Miatas, Corvettes, Plymouth Neon, Ford Focus, Porsche Cayman GTS, and an Alfa Romeo Spider. Go Karts were present but were definitely not your average Kart since these drivers were running the course faster that most of the regular cars.

To call this group of people automobile enthusiasts may be on the level of a major understatement― friendly, cooperative, patient―just down-right nice folks.  Even in the swirl of activity, Shane Eudy (club president), Chris Polhamus (treasurer), and Eric Baumgartner (autocross chairman) gave the introductions to the sports car club and explained its function.

As a photographer I had to sign a waiver saying the club wasn’t responsible for any injuries that might occur by doing something dumb. I was given a wrist band for identification, and fitted with a bright lime green vest that allowed me to go anywhere on the course, as long as I stayed with the spotters positioned around the track. When I got with the first pair of spotters, the man in charge said to the younger man, “Now, if anything goes South, you grab him and run as fast as you can; just get him out of the way.”

After I made my way back to the grassy area with no major mishaps, Baumgartner came over and asked how I had liked that vantage point.  Then came the real question,”How would you like to see it from the inside of a car?  You wanna ride?”  This man was driving a black Corvette, and he asks a Corvette-loving baby-boomer if he wants to ride? The helmet went on and we went to the starting line.  Before we hit the track, the last thing he said was he would take it easy on me and not drive it so fast.  Forty-six seconds later we were crossing the finish line.  Later, that day, he had a run of 40.4 seconds.  By the time I got out of the car, I was on an adrenalin high that lasted two days.

These competitions are open to the public with no admission charges.  Any local adult with a valid driver’s license – within the club’s guidelines – can participate by paying a reasonable entry fee.

Additional information may be obtained online at hscc.club and msreg.com/ncac.