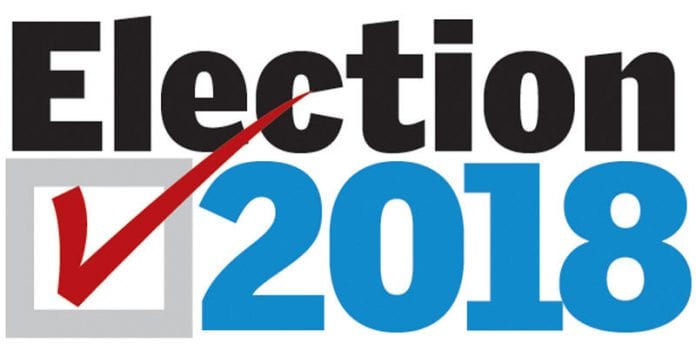 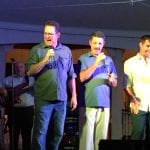 Incumbent Republican Rep. Kevin Corbin sang gospel praises of the lord from a stage in downtown Franklin Saturday night, but chose not to mention his candidacy, the impending vote, or politics at all. But the North Carolina House District no. 120 election is clearly on his mind. That morning, his challenger, democrat Aaron Martin of Hayesville, had coffee and jelly-filled donuts with supporters at the Macon County Democratic Party headquarters on Palmer Street Circle. The republican majority in the General Assembly is at stake. 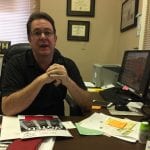 That’s why Gov. Roy Cooper called Martin to encourage him to declare his candidacy the day before the deadline. When a reporter arrived to his office, Corbin had a North Carolina Chamber of Commerce report ready, proud of his freshman accomplishment. In interviews, candidates differed in local government experience, but held similar values regarding health care and education. Here’s a look at their positions on a range of key issues, plus something you may not now about the candidates ́ personal lives. Both candidates square off when early voting starts Oct. 17.

“I’ve got deep roots here. There are six generations of my family buried here,” said Corbin, 57, noting that many in the far west of the state feel it has “been ignored.” That’s where barbeque and windy roads come in. 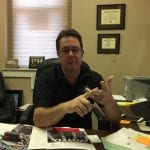 Corbin said he has hosted General Assembly House Speaker Tim Moore in Franklin six times. Once he drove him along Wayah Rd. through Nantahala to Murphy instead of US-64 to show him the need for financing both of Macon County’s rural K-12 schools. The result was $1.5 million in the state budget. Feeding the Speaker Fat Buddies ribs and Brunswick stew didn’t hurt either. “You have to show them,” he said.

Corbin said he has more than 25 years’ experience in local government between two decades on the Macon County School Board and six years as a County Commissioner. The family man waited until his children left the house to run for a statewide seat in 2016. “I would have divorced him,” said Beth Corbin, with a smile, after the representative attempted a more nuanced explanation. 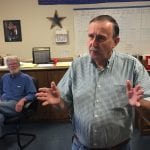 Aaron Martin, 70, admitted to a group of supporters at the Macon County Democratic Party Headquarters that he had a lot to learn if granted the privilege to represent them: “If elected, I’ll have to study a lot at night, I think.”

The former Farm Service Agency (FSA) state specialist (2009-2013) and district director responsible for the state’s 20 westernmost counties (2001-2009), underscored his lifelong identification with the Democratic Party and its values. “I was raised to believe that prosperity was connected to Democrats,” Martin said, before launching into a story about how his mother allowed him to stay up to watch the 1960 election results when John F. Kennedy was vying for the presidency. 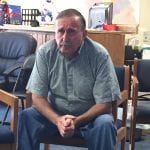 The soft-spoken man in a checkered short-sleeve shirt and baggy jeans got fired up when talking about the need to overturn the Republican majority in the General Assembly: “I’d love to see people head to the polls– just thousands of people– with a pitchfork in their hand or at least nearby.”

“There are plenty of jobs, but the trouble is they don’t make enough money,” Martin told about half a dozen supporters before describing his first job as a trash collector, earning $860 one summer in DeKalb County, Georgia. He then spoke about his mountain values of self-reliance but said that free market economics leaves some people behind, and there “needs to be a safety net” in economic development among other areas. 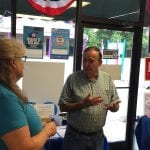 “I have benefited from the policies and programs of Democrats, and I want everybody to have the same chance that I had,” he said. The former small business owner spoke about decades helping farmers identify government assistance programs. Martin also said broadband expansion should be prioritized, and it was a mistake not to consider high-speed Internet as a public utility.

“The biggest issue is high-speed Internet connectivity,” said Corbin, citing a bill he sponsored with fellow rural legislator Rep. Josh Dobson to expand internet trunks for companies to connect to more easily. He is hoping the bill will pass this session.

“There’s not a silver bullet as far as Internet,” he explained behind scattered papers at his Corbin Insurance Agency desk in downtown Franklin. Corbin spoke about getting state economic development grants that could help cities and counties create the conditions for companies to see profitability in providing high-speed Internet service to rural clients.

The freshman senator also proudly shared with MCN his 95 percent North Carolina Chamber “How They Voted” ranking for voting on behalf of pro-jobs legislation. Corbin also co-sponsored bills to cut personal income tax to 5.49 percent and raise a couple’s standard deduction to $20,000 in 2018, which he said puts an average of $500 back in consumers’ pockets. He also supported reducing corporate tax rates from 6 percent to 3 percent, which he believes has led to job growth.

“When the legislature convenes, I’m probably the most pro-public education guy in the building,” the 20-year Macon County School Board member assessed. Corbin said he supported $1 billion in legislation that will raise school teacher salaries back to the 2008 pre-recession levels, not adjusting for inflation, and he called for continued funding.

“It is moving back in the right direction,” he said, agreeing that he is more forward-leaning on education funding than his Senate colleague, Jim Davis. Corbin also wants less testing, to do away with the burden it creates for teachers, students and families.

A Georgia public school teacher from 1970 to 1974, Martin supports expanding vocational training to prepare for the end of low skill jobs to automation. “Kids if they don’t want to go to college, we need to

get them some kind of skills,” he said. The part-time farmer also said higher education debt needed to be addressed: “They’re not going to have a home or car with this monstrous debt.”

Martin had not heard about the proposed Hospital Corporation of America (HCA) buyout of Mission Hospitals when a supporter raised her concerns about the uncertain impact of the move. “Where have you been?” the supporter asked. “Over in Clay County,” Martin said, listening intently to a plea to communicate to Atty. Gen. Josh Stein to halt the deal. “I will certainly have a conversation with him then.”

Regarding Medicaid expansion, Martin was unequivocal: “It is unforgivable that this legislature didn’t expand Medicaid.”

When it comes to health care, Corbin said he had a “long meeting” with Mission Health and received a “commitment” that their buy-out deal will maintain rural residents’ access to primary care. “I plan to hold them to that,” he added, while admitting he would have no legislative way of enforcing such a commitment. Corbin said he has not met with proposed buyer, HCA to obtain the same commitment.

The insurance agent also offered carefully-worded support for expanding Medicaid in North Carolina. “In general, yes,” he said of finding a way to bridge the gap for the approximately 10 percent of Carolinians who are uninsured and without federal subsidies. “I think I could under certain conditions.” The self- described fiscal conservative specified that would mean finding a way to finance the expansion after federal funding expires.

“Addiction affects people of all backgrounds,” said Corbin, who co-sponsored the 2017 STOP Act to reduce opioid prescriptions and create a database to prevent patient abuse. He also believes rather than locking up addicts, mental health funding should be increased. “I believe we are terribly underfunded in those areas.”

Corbin said he asked the sheriffs of the four counties he represents if they could do away with addiction, what percent of the crime would be gone? “The answer I got was 80 percent or more,” Corbin recalls.

Choking up, Martin told supporters that opioid addiction contributed to the deteriorating mental and physical health of his son, an Air Force veteran of the 1991 Gulf War who died of congestive heart failure at 47. Martin supported increasing access to mental health services and creating a program in North Carolina modeled after Georgia’s First Time Offender Act, which allows first-time offenders to serve time without a criminal conviction in certain circumstances.

Singing gospel is how Rep. Corbin shares his faith. Corbin has sung for the gospel group Blue Ridge for 30 years, recording 27 albums and reaching the Top 40 in gospel in 2010 with the patriotic and religious

song, “One Nation.” And if you heard him sing it Saturday to close out his hour at Franklin’s Pickin’ on the Square, he would have made you stand, too, when the Pledge of Allegiance was recited mid-song.

“Music is a fun thing,” he said. “I don’t wish to impose my religious views on anybody, frankly. But it’s an opportunity to share my faith with people and what God means to me.”

Martin still remembers the day Lady Bird Johnson came to Western Carolina University in Cullowhee to speak in 1968, accepting an invitation that he and a group of progressive students had extended. He later changed his major from business to political science.

“It was a thrill. We got to see her,” he beamed, noting that President Lyndon Johnson’s Great Society values stayed with him for a lifetime. He reflected on helping the poor and minorities and remembered a story from when he helped his father run a feed store in the late 1950s.

“Dewey Mull came down. Well, he needed dairy feed,” he recalled, describing a community that lacked transportation and used the cloth from dairy bags to make children’s clothing. “He took that hundred- pound sack of dairy feed and put it on his shoulder and from our store to the bend of the road was about a quarter of a mile. I watched him go outside carrying that 100-pound sack and he lived about 3 miles. But, I don’t know. I don’t know. But I saw that. People didn’t have money, they just didn’t.”