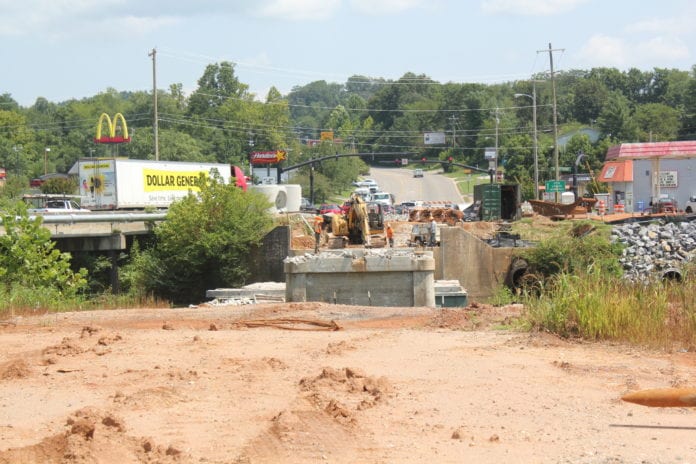 An increase in traffic in Franklin during the summer months has made the North Carolina Department of Transportation’s presence in Macon County even more evident, as road work tends to add to the town’s congestion.

According to Jesse Russell, the NCDOT District Engineer representing Cherokee, Clay, Graham, and Macon counties, the projects should run a little more smoothly now and be completed on target.

The Franklin bridge project had stalled over the last few weeks with complications surrounding the requirement of a rescue boat in the water and other roadblocks, but according to Russell, work has continued this week and should continue.

“The contractor has continued work on the bridge as of this week,” said Russell. “It is my understanding at this point that work shall continue throughout the fall and winter.”

Construction on the Franklin bridge began in March and was given a projected completion date of 18-24 months. Demolition of the bridge started on time, but then the project has not seen significant progress this summer.

Franklin’s town bridge was constructed in 1931 and with little maintenance work done over the last 85 years, the bridge has continued to deteriorate. After the NCDOT deemed the structure to be deficient, funding was allocated from the state for repairs. Structurally deficient bridges have load carrying components in poor condition due to deterioration. These bridges are safe; however, they require significant maintenance to remain in service, and limits on vehicle weights may be needed. To fully address the issues on a structurally deficient bridge, extensive rehabilitation or replacement is usually required.

A second project in Franklin that has garnered some attention is the construction of an exit ramp at the intersection of East Main Street and Highway 441 bypass. A couple of months ago, the NCDOT changed the traffic pattern at the red lights at the head of town, which resulted in the right turn exit ramp to get on the highway being eliminated. Now, just a few months later, the NCDOT has decided to reestablish that exit ramp to ease the flow of traffic.

“Watson Contracting Inc. was awarded the contract to re-install this ramp,” said Russell. “The contract completion date is set for May 31, 2018.  It is anticipated that the project will be completed within just a few weeks.”