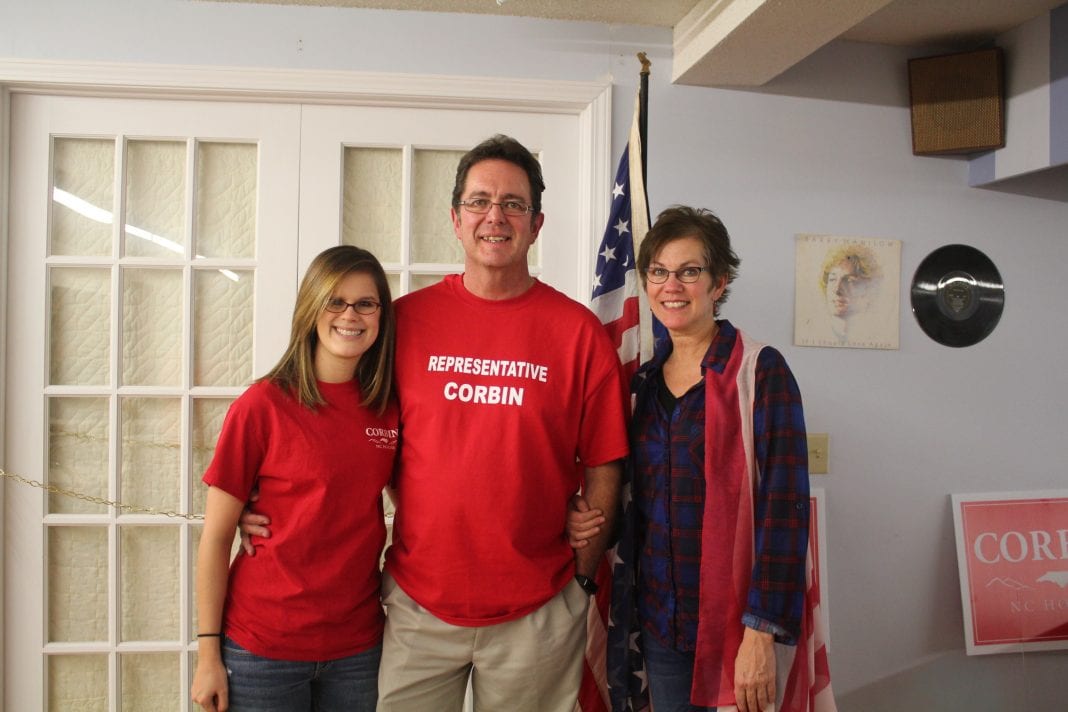 “If your actions inspire others to dream more, learn more, do more and become more, you are a leader.”  — John Quincy Adams

The measure of a man is often defined by his accomplishments – how they stack up to expectations. But more important than a check list of “to-dos” and “have-dones,” the real legacy of one’s service can be found in the impact one has on those around them.

Kevin Corbin was born into a life of public service. At a young age following in his father, Harold Corbin’s foot steps, Kevin threw his name in the hat to serve on the Macon County Board of Education. After 20 years on the school board, 16 of which was served as chair, Kevin decided he had had enough of politics and wanted to work on his business and his growing family.

When Senator Jim Davis was elected to the North Carolina General Assembly, Davis turned to Kevin to fill his vacant seat on the Macon County Board of Commissioners. Over the ensuing six years, Kevin served as commissioner, winning his re-election campaign and being voted as chairman of the board by his fellow commissioners for the last five years.

“I first started working with Kevin during my first tenure as Macon County Manager from 1985-1991 while Kevin was serving on the school board,” said Jack Horton. “I have always had a lot of respect for Kevin as a leader. He has always had an open and honest way of serving. When he was on the school board we worked together to focus on consolidating the schools with new construction and then as commissioner he saw those projects through and was instrumental in the county’s recreation advancements. Kevin has always had a vision for the future. He has always looked for ways to get things done, not reasons not to do something and I have always admired that a lot.”

county and agreed that Kevin’s vision for public education and his dedication to recreation and projects such as Parker Meadows and updating public pools in Franklin and Highlands, speak volumes to Kevin’s commitment to the people of Macon County.

“Commissioner Corbin has been a consistent and dependable leader for the citizens of Macon County,” said Macon County Commissioner Ronnie Beale. “He has been a great supporter of our schools, and is always looking for ways to improve the quality of life for all Maconians. I think the Parker Meadows Recreation complex tops the list. When he, Commissioner Jim Tate and myself were the only commissioners to support this project and to see it not only be very successful but being able to pay the loan in less than two years is pretty special. This took vision and doing what is best for the community and Kevin had and did both.”

More than the projects that Kevin saw through to completion, Tate noted that Kevin’s greatest accomplishment as a leader in Macon County was the way he led.

“As our chairman, Kevin has led our county with a remarkable sense of respect for everything Macon County,” said Tate. “Whether he agrees with you or not, he always shows a gentle smile with an understanding demeanor.  And, when decisions were made, Kevin always placed the greater good of Macon County above all else. Delivering efficient, effective and transparent government were his hallmarks and he will undoubtedly continue that effort at the state level.”

Tate has served as the vice-chair on the Macon County Board of Commissioners, and noted that Kevin will without a doubt leave a void on the board.

“I am personally going to really miss Kevin on our board of commissioners,” said Tate. “He has not only been extremely instrumental as a mentor to me in regards to politics, but he has also become one of my best friends.  For those that follow local politics, it is no secret, that Kevin and I have formed an incredible political team over the past five years and we have virtually voted together on almost every single issue. But, even though I feel like his absence will be greatly missed on the Macon County board, it is quite obvious that Kevin is destined for greater things and a larger role in politics.”

With a life of public service already to his credit, not only has Kevin worked to serve his community, but has done so while managing a growing insurance business and raising two children, and most recently, welcoming his first grandchild. Rather than feeling as if they have taken a backseat to Kevin’s role in politics, his family continues to support him and stand beside him as part of the reason for his success.

“There has always been so much about his politics and power to lead that I have admired,” said Beth, Kevin’s bride of 32 years. “He has always been able to bring a board together whether it was bipartisan or party, he is always calm, patient and willing to listen to understand, rather than listening to respond, and that is what makes a great leader for me.”

Kevin and Beth met in high school, which is when according to Beth, she knew Kevin would live a life of service to others.

“In high school he was the president of the Interact Club and that is when we met,” she said. “I knew then that public service was something that was in his heart.”

While serving on the board of education, Kevin’s father Harold served as a commissioner, which is something Beth believes stands out as one of Kevin’s greatest accomplishments.

“Kevin has always put public education first and working to upgrade the school system was something he set out to do and something he saw all the way through,” said Beth. “I think it’s amazing that he and his father could serve at the same time and work on their passions together.”

Kevin’s oldest child, Matt Corbin, noted that Kevin’s long list of accomplishments speaks for itself and he couldn’t be more proud.

“He’s worn so many hats for so many years, but has maintained his commitment to his faith, his family, and Macon County … and that’s what I’m most proud of,” said Matt. “I see this next hat fitting just right. I think he’ll be missed back home, but the county will be in great hands. I see him making an immediate impact in Raleigh as a freshman representative. He brings a wealth of experience and practicality and intimately understands the unique landscape of issues impacting WNC.”

Kevin’s daughter Maggie couldn’t agree more and after growing up watching her father transition from office to office, she is excited to be supporting him onto the next level of his political career.

“I could not be more proud of my father and the accomplishments he has made as a county commissioner, along with the rest of the commissioners throughout the years,” said Maggie. “My father has a huge heart to serve others and has given his all to serve this county with a ‘people first’ mindset. There are countless contributions that my father and his fellow commissioners have supported and made possible through the years he has served in order to make this beautiful county what it is today. As much as I would love for him to stay and serve as the chairman of county commissioners once again, I cannot wait to see what this new journey has in store for him as an NC House Representative.”

Beth noted that one of the reason she believes Kevin is going to excel on the next level is because the timing is right.

“This has been something we have talked about since 2010 and back then, I jokingly told him if he decided to run for the House then, that I would divorce him,” joked Beth. “We had two seniors, one a senior in college and another a senior in high school and it just didn’t feel right then. But this time, everything seems to line up now. This has been a dream and passion for our family and I have no doubt that he is going to make a big difference in the state.”

Kevin’s stepmom, Darlene Corbin, more affectionately known as Mamaw, is confident in Kevin’s ability to serve and give Macon County a voice on the state level.

‘What a pleasure and honor, not to mention how very proud I am of Kevin Corbin being elected as our representative,” said Mamaw. “He has demonstrated his diligence in serving Western North Carolina through Macon County School Board, county commissioner, leading as chairman of both boards, Kevin is an upstanding Christian citizen, husband, father, and now grandfather. I believe his father, Harold Corbin had an inspirational impact in Kevin’s community work and his love of service for others. Kevin has been a blessing to me all these years we have shared as family and will continue to be in the days ahead.”

Demonstrating his leadership, representatives on both the state and federal level commended Kevin for his work on the county level and showed confidence in his ability to lead North Carolina.

“I have been fortunate to know Kevin since I was first elected to Congress and have been able to work with him to accomplish several things for Macon County,” said Congressman Mark Meadows. “Kevin comes from a long line of public servants and I am confident that he will continue to be a champion for Macon County and all of Western North Carolina in the State legislature.”

Speaker of the House Tim Moore has worked closely with Kevin during his tenure and is looking forward to the opportunity to now serve alongside him.

“Our state is fortunate Representative-elect Corbin will continue his decades of public service by joining the General Assembly,” said House Speaker Tim Moore.  “His tremendous dedication to Western North Carolina and experience in local government make him a valuable addition to our freshman class in the House of Representatives. He is already focused on improving the quality of life for his constituents and all citizens of North Carolina, and I can’t wait to get to work with him next year.”

On Dec. 5, Kevin will pass the gavel to the new board of Macon County Commissioners and then will be sworn in in Raleigh on Wednesday, Jan. 11.

“I have 100 percent confidence that Kevin will accomplish great things at the state level because his ability and knowledge of how to communicate is unparalleled,” said Tate. “He understands how government works through the building of relationships, and he will harness this power to reap western North Carolina great rewards during his term.”

After more than three decades serving the citizens of Macon County locally, Kevin will without a doubt go on to serve all of North Carolina with the same respect, dedication, and promise of progress.

Under Kevin’s leadership we have accomplished many great things that will continue to benefit this county long after we’re gone,” said Macon County Manager Derek Roland.”From watching Kevin I have learned so much about what it means to a leader. A leader is someone who makes a decision and follows through with it. Leaders never back down in the face of criticism, they press on and see their decision through. Kevin Corbin, like his father before him is a great leader. Not only was Kevin a leader, he was a coalition builder, a listener and his handshake was as good as any contract. Raleigh is definitely gaining an asset in Kevin.”