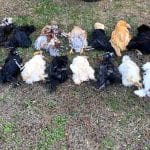 One Macon family is mourning the loss of more than a dozen pets due to an ongoing issue with neighboring dogs.

Eric Haggart and his wife live in the Clark’s Chapel community and have observed a neighbor’s dog roaming the neighborhood in the last few months. Security camera footage has shown the dog in the Haggart’s yard and around the property, which is where Haggart keeps his chickens, which are raised as pets.

“We contacted animal control immediately and an officer responded very quickly,” said Haggart. “I gave him a description of the dog and general location of where we thought it lived. Later, the officer returned stating he found the owner and had spoken with them but the dog was not there. We’re now awaiting an incident report to see where it will go from here.”

While waiting on the process of animal control addressing the situation, the dog once again trespassed onto Haggart’s property, and this time claimed the life of 15 chickens.

“I arrived home within 10 minutes to find dead chickens all over our backyard, side yard, and in the neighbor’s yard who called to inform me about the attack,” said Haggart. “After I arrived home, I had to unlock our gate on our eight-foot privacy fence, which required me to enter my house through the garage and back down the back deck into our backyard. I left the garage door open, thankfully our cameras were still rolling, because it captured more footage of the dog walking in and around the garage just a couple minutes after me.”

Coming home to complete destruction, Haggart started to evaluate the situation to see what the total damage was.

“I started to take a head count of how many were alive, injured, and dead,” said Haggart. “Since the chickens were scattered in and outside of our fence, it was a frenetic search. I continued to try and figure out how the dog got inside our yard, which is enclosed by the eight-foot fencing. When I opened the gate to go back into the other open part of our yard, the dog ran right in front of me. That is when I fired at it with my .22 rifle and it took off out of our yard.”

After collecting the dead chickens from the neighbor’s yard Haggart determined that 15 chickens had been attacked and killed. Animal Control was called and responded quickly to the scene.

Haggart called veterinarian Dr. Jessica Scruggs in hopes of saving some of the injured chickens who managed to escape during the attack, but she ended up having to euthanize three more chickens.

“After doing another walk around our fence, we found that the dog had pulled off a section of lattice to gain access to the yard,” said Haggart. “After two hours of climbing through woods and rounding up the remaining chickens, we did a final tally: 18 dead, three with serious but recoverable injuries to their backs and sides, and 15 that seemed to be unharmed.”

Macon County has a “dangerous dog” ordinance, and pending an investigation, the owner of the dog could be charged with a Class 3 misdemeanor for violating the local ordinance. The county ordinance requires all animals be contained, and also clearly defines nuisance animals and the penalties associated with it. The dog owner is also subject to civil penalties.

According to Haggart, a resolution is not so cut and dried in this situation.

“What we would truly like to see happen as a result of this attack on our animals is two-fold,” he said.”We value all life and we value everyone’s right to own pets. People talk about financial restitution, but in reality, we want more. When I think about how that dog broke into our fenced-in yard and began to slaughter our pets, how scared they must have been, the nature in which this dog chased and systematically went one after the other and then lingered around the house even after I had come home and was actively seeking it. We want the dog removed from the home and euthanized.”

Haggart would also like to see the ordinance strengthened to address issues like the one he is facing and prevent it from happening in the future.

“But in a perfect world, I would like the laws or an ordinance to be written that anyone who owns a pet that gets out of their control or property and attacks any other pet/person/etc should not be allowed to own any pets either for an extended period of time where they can demonstrate safety measures that will keep any further pets from doing the same thing, or they should not be allowed to own a pet ever again,” said Haggart. “Our animals, whether they are chickens, dogs, rabbits, or cats, are our family. They are not just chickens, they are each their own personality, just like any other living person or animal. We don’t raise chickens for meat, we do collect eggs to eat and sell, but at the end of the day, they are all our family.”

Haggart said that because the event is still new, he is still debating the next step to take, but said going before commissioners to discuss a change to the ordinance is something that is definitely on the table. The next scheduled meeting of the Macon Board of Commissioners is Tuesday, Jan. 14, at 6 p.m.