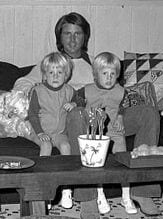 A celebration of the late, iconic singer, “Ricky Nelson Remembered” will hit the Smoky Mountain Center for the Performing Arts stage at 7:30 p.m. Friday, March 16, in Franklin. Nelson’s twin sons continue to perform his hits to carry on his legacy.

“Our father was our best friend, and was highly and unfairly underrated when he was alive,” ski Gunnar Nelson. “We proudly set the record straight. 400 million singles sold… over 40 top 40 Billboard hits. He was the only person to have had a number one movie, number one TV show, and number one song the same week. He single-handedly smuggled rock and roll into mainstream American living rooms at a critical time in rock’s history. He later was the pioneer of country rock with his Stone Canyon Band four years before the Eagles were founded by his bass player, Randy Meisner. Up until the day he died, he was performing 300 days a year… and he literally lived (and died) for rock and roll. We’re honored to honor our hero with Ricky Nelson Remembered.”

Nelson was an American rock star, musician, singer-songwriter, and actor. For more than two decades, he was idolized for his performances of popular songs such as, “Hello Mary Lou (Goodbye Heart),” “Bye Bye Love,” “Dreamlover,” “Travelin Man” and “I Will Follow You.”

The event includes never before seen big screen video footage of the Nelson family with interviews from celebrities, family and friends of Ricky Nelson. The show appeals to a wide audience and multiple generations of music lovers and celebrates Ricky Nelson’s life and rise as America’s original Teen Idol’ to his tragic passing in a New Year’s Eve plane crash.

According to Gunnar, his favorite part of the show is the connection he feels to the audience.

“It’s immediate, unlike recording (which we also love doing),” he said. “To quote grandma Harriet, “Nelsons have never been in the entertainment business. We’ve been in the connection business.” This show helps us connect with an audience and make them feel 10 feet tall and bulletproof. “

Friday night isn’t the first time Gunnar and Matthew have performed in Macon County. In 2012, the duo performed  at The Highlands’ Performing Arts Center.

“It’s been way too long,” Gunnar said of having a chance to return to the mountains. “As a matter of fact, we’re coming back there this year with our Christmas With The Nelsons show the day after Thanksgiving in Highlands.”

Gunnar said that with so many years of experience, performing is just second nature at this point.

“At this point in our careers, and after literally thousands of shows, stage fright doesn’t come in to play,” he said. “But we do like to take the hour before curtain to center ourselves. Putting on our warpaint and stage clothes certainly helps set the mood… but it’s usually me and Matt alone in the dressing room talking and psyching ourselves up for the show like we’ve been doing since we were 6 years old.”

While Friday night’s show is in celebration of his father, Gunnar was adamant that the show isn’t a tribute, but rather a celebration.

“We’re not up there in Ricky suits trying to pretend to be him, because no one could ever be him- he was one of a kind,” said Gunnar. “This show is a high-integrity celebration. It’s done with genuine love. It’s the show that we love to do, not the one we have to do… and you can feel it from the second you walk in the door. That said, it’s FAR more than you’d expect. It isn’t just a couple of brothers up there singing and playing: Ricky Nelson Remembered is best described as a high energy rock concert meets an A&E biography episode. We bring big screen video and pull from the best of the 435 episodes of the Adventures if Ozzie and Harriet… hear from Pop’s friends like Paul McCartney, John Fogerty, Kris Kristofferson. And of course, there’s Matthew and Gunnar, playing these incredible songs with the same kind of passion and ferocity that our Pop and his friends were when they were 16. Honestly, doing this show is an absolute blast… and we hope to see all of North Carolina there!”