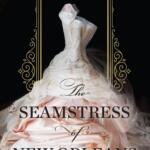 Local author Diane McPhail’s new, May 31-published book, “The Seamstress of New Orleans” is already garnering attention on GoodReads as a top historical book, and an interview with McPhail will be featured on National Public Radio’s “The Writing Life.”

The novel is McPhail’s second. She is a Highlands-based artist, writer, and minister, and a member of North Carolina Writers’ Network and the Historical Novel Society. “The Abolitionist’s Daughter,” published in 2019, was her debut novel.

A synopsis from the new book focuses on the historical plot.

“The year 1900 ushers in a new century and the promise of social change, and women rise together toward equality. Yet rules and restrictions remain, especially for women like Alice Butterworth, whose husband has abruptly disappeared. Desperate to make a living for herself and the child she carries, Alice leaves the bitter cold of Chicago far behind, offering sewing lessons at a New Orleans orphanage.”

“My inspiration for ‘The Seamstress of New Orleans’ is multi-faceted,” McPhail expressed about her new book. “After [Hurricane] Katrina, I had an apartment in the French Quarter for a couple of years. There I had the wonderful experience of riding with an all-women’s krewe for Mardi Gras; the krewe of Iris of which my friend Dian Winingder had been Queen. I became very interested in the history of the very first women’s krewe, Les Mysterieuses, and the efforts of women towards equal rights, culminating in the vote 20 years later.” [A “krewe” is an organization or association that stages a parade or other event for a carnival celebration.]

She added, “I have spent hours and days and weeks in the various archives and museums of New Orleans absorbed in research of all kinds to bring this book together. My research led me into the fascinating history of Storyville, a sanctioned red-light district named for the city councilman who proposed it, and the crime syndicate operating there, known as the Black Hand for the signature of an inked handprint on threatening notes.  The relationship of the two women at the core of the novel came from numerous sources, including a factual story, interest in the multiple orphanages, the strength and courage it takes from all of us to face life in general.”

McPhail’s books are available via online resources and at local bookstores, such as Shakespeare and Company in Highlands and A Novel Escape in Franklin.