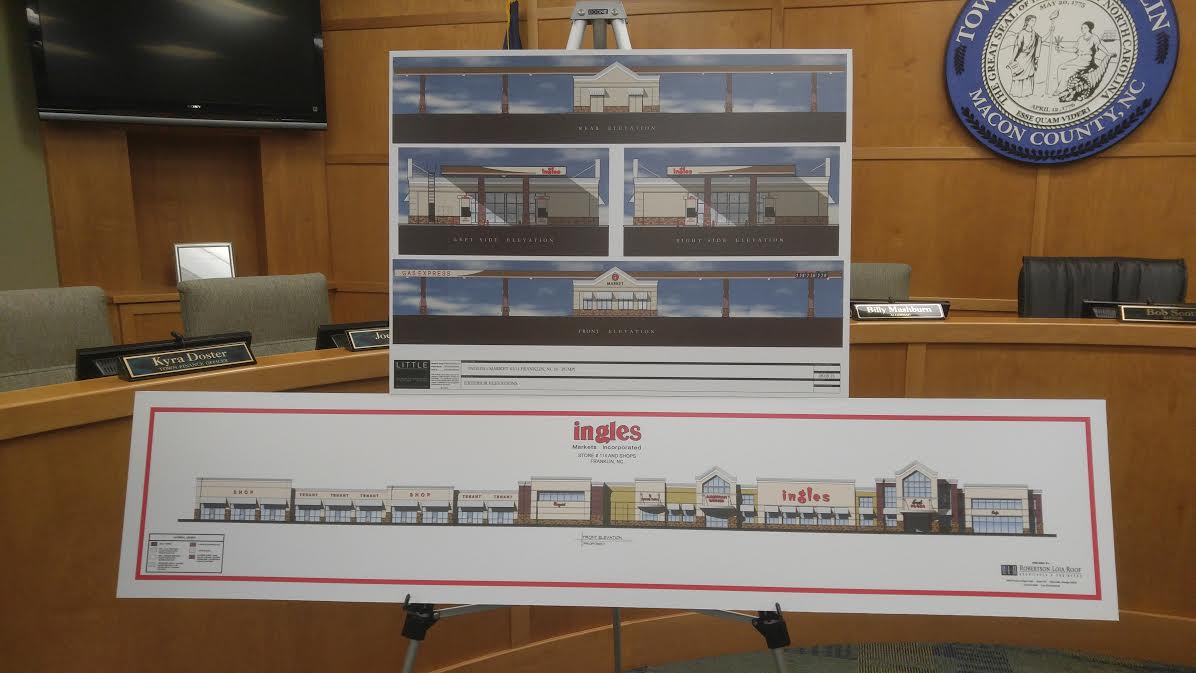 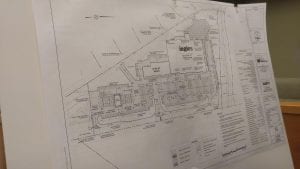 Ingles unveiled its plans for the 13.03 acre old Whistle Stop property on Monday at a neighborhood compatibility meeting. Ingles purchased the property last November for $5.55 million and plans to construct an 88,928 square foot development which includes a 72,128 square foot Ingles grocery store with 14,800 additional square foot space for retail shops.

Ingles Markets Project Manager Preston Kendall led the meeting which is required for Ingles to construct the proposed development. The old Whistle Stop property is currently zoned as a C-3 which only allows new buildings of 30,000 square feet or less to be constructed. Ingles will have to petition the town for a special use permit to build the proposed development and the neighborhood compatibility meeting is the first step in that process. Franklin Town Planner Justin Setser sent out 25 letters to property owners within 400 feet of the proposed development, a dozen of which were part of the standing room only crowd that gathered at town hall on Monday to learn of Ingles’ plan. 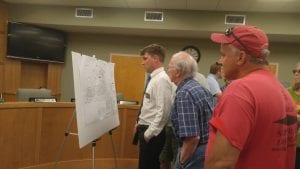 one located in Clayton and is the same design that was constructed in Enka-Candler in September 2015. The Ingles store has plans to feature a Starbucks, its own Chopsticks restaurant inside with seating areas and televisions; a fresh bakery, full salad bar, hot bar, and olive bar, and a full deli counter that will include Boar’s Head meats. In addition to food offerings, the store will feature a pharmacy equipped with a drive-thru as well as an eight pump gas station which will border the Zaxby’s parking lot. The building will also feature free charging ports for electric cars.

“To get the doors open and everything up and running, the new store will need to hire 350-375 employees,” said Kendall. “Those will be new jobs the store will bring to the area.”

Georgia Road traffic has been a concern of local residents and was one of the first questions Kendall addressed. The North Carolina Department of Transportation has already approved a traffic light that will sit at the entrance of the Macon County Community Building. The light will be the main entrance to the Ingles across the street. In addition to the light that has already been approved, the DOT is currently formulating a plan to address the entire Georgia Road melange which is expected to include either a grass or concrete medium that will make a u-turn available on the road and address other traffic concerns.

Two entrances are proposed into the shopping center from the Georgia Road with another entrance off of Belden Circle. The one-lane bridge on Belden Circle was constructed in 1923 and is also on the NCDOT’s priority list to be replaced in the next three to five years, but with the proposed Ingles project, Setser is hoping to see it replaced sooner to make traffic on that road safer as well.

The visual aspect of the building was a concern for Franklin Mayor Bob Scott, noting that the store will be one of the first things people see as they enter Franklin.

“The store is going to be one of the first major things people see coming into North Carolina and Franklin, can you talk little bit about your plans for trees and grass to make it look welcoming?” said Mayor Scott. 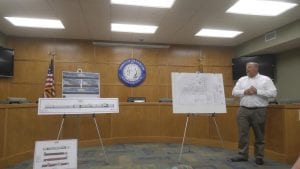 Kendall noted that Ingles as a company makes it a priority to plant green spaces in and around the development because grass and trees make the entire shopping experience better for customers. The large trees lining Belden Circle will be removed by Ingles at the request of Duke Energy as they interfere with the power lines on the property. Kendall noted that smaller trees will be planted in their place.

According to Kendall, the 14,000-square-foot retail space is available and the company has no specific plans for any specific retailer to occupy that space at this time. He also noted the the Ingles will probably be open before those are even rented out. Ingles will construct that area as one big open space with various doors and storefronts. The inside will be bare so retail businesses can rent 500 sq ft or the entire space, based on availability.

In September 2015, Ingles also purchased the former Walmart property located in the Holly Springs Plaza. Residents asked Kendall what Ingles had planned for the property.

“I think we will do something in the future, but first we want to get this store up and running and see how this project goes,” said Kendall. “After this is done we can start looking at that property. We aren’t going to come in and open two new stores in the same town though.”

Former Franklin Alderman Joyce Handley pleaded with Kendall to do something for that plaza as the shops currently located there are barely hanging on. 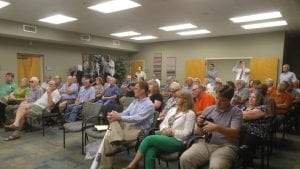 just waiting to see what you have planned there,” she said. “I would strongly encourage you to do something there quickly to help generate traffic for the stores that remain.”

Kendall took note of Handley’s comments and said he would pass on the suggestion immediately.

The neighborhood compatibility meeting was the first step in a three-step process with the town of Franklin for Ingles to receive the first permits needed to move toward construction. Ingles plans to begin demolition on the current Whistle Stop building within the month. The Franklin Planning Board is the next step in the process and members will be discussing the special use permit application on Monday at 4 p.m. during their regularly scheduled meeting. The Planning Board will then make a recommendation to the town of Franklin whether or not to approve or deny the special use permit. The third and final step in the process will be a public hearing tentatively scheduled for Oct. 7 during the Franklin Board of Aldermen regularly scheduled meeting. After the public hearing, the town board can then make the final decision to approve or deny the development. 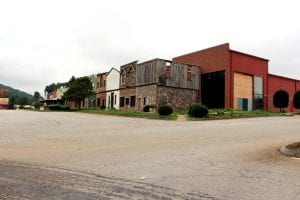 With that timeline in mind for permit approval, Kendall noted that the new store is still three to four months out of construction. But from the time the first fences go up, he said the new store will be up and running in nine to 10 months.

Even with the new store planned to be open within the year, Kendall noted that at this time there are no plans to close any of the existing Ingles locations in Macon County. After the new store is completed, Ingles will revisit the plans for the existing stores.

County to take the lead on The Greenway connector project