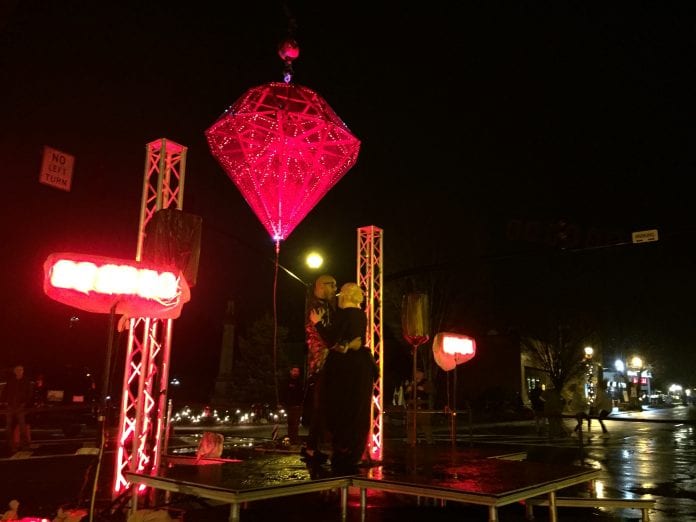 For three months in the fall of 2013, brothers Tim, Samuel and Stephan Crabtree met in a storage unit behind Motor Company Grill 2-3 nights per week with a singular objective: put Franklin on the map for New Year’s Eve.

Middle brother Tim Crabtree, 33, heard about the Possum Drop in Brasstown livening up the downtown for two decades with music, vendors and bars and restaurants open late.

“I thought, ‘We gotta drop something,’” Tim said, sporting a metallic silver printed jacket at the Root and Barrel bar a couple hours shy of midnight on Dec. 31. “I just said, ‘We’re doing this.’” 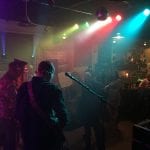 In recent years, other entrepreneurs had done their part to attract people to a once-sleepy downtown. Lazy Hiker and Rathskeller were serving microbrews to tourists and locals. Brett Murphy gathered 15 investors and raised $400,000 to turn a vacant building into the only downtown Franklin restaurant that takes reservations.

“I remember the first day we opened,” recalled Murphy, 37, of the day in February 2015. “It was an amazing sight after 5 p.m. to see cars parked downtown.”

But most still spent New Year’s at home.

The Crabtree brothers carried takeout burgers from Motor Company and ordered pizza for an estimated 180 man-hours that were spent honing steel, Plexiglas and more than 1,300 LED lights into a 7’ x 7’ ruby.

“We always got along really well growing up,” said Stephan, 35. “It only got stressful with two weeks left and still a long way to go.”

Just three days before New Year’s Eve 2013, Stephan recalls looking at the giant ruby and thinking, “Man, this thing is awesome. I can’t believe we just built this.”

The brightly glowing, brilliant cut ruby now hangs suspended from a crane 40 feet in the air in the center of a Main Street each New Year’s Eve. For two years, the town has also closed off the street to make way for pedestrians to visit shops and restaurants and gather to celebrate together.

“This is all the Crabtree’s doings,” said a hurried Franklin Mayor Bob Scott, armed with a camera just minutes before a drizzly midnight. Streetlights and the ruby’s red glow shimmered on the wet pavement before the feet of excited revelers.

With some help from local tourism development and authority funds, Crabtree’s businesses cover costs for the new digital clocks, stage, barricades and even wages for the off-duty Macon County Sheriff’s Office deputies on hand.

“It’s a way to gather as a community and ring in the new year,” said Lt. Derrick Jones, 36, a Franklin native who has helped with security for each of the ruby drops.

Crabtree said costs vary year-to-year, but he guessed with marketing, this year’s event cost $8,000 to put on.

“We’re about break even now after five years,” he said of the fruits of his effort to lure locals and tourists downtown with the gem.

Root and Barrel’s Murphy took 110 reservations this New Year’s Eve and expected around 250 patrons in his restaurant.

Local carpenter Everett Wright, 32, was at the bar proudly sporting a gold flower-print emblazoned black blazer, a Christmas gift from his wife for the occasion.

“I’m here for a good party,” he said while sipping a Bulleit Old Fashioned cocktail finished with a bourbon-soaked Jack Rudy cocktail cherry. “There are few occasions that I get to dress up for and this is one of them.”

A long-time friend of Tim Crabtree, Wright boasted about the young entrepreneur’s achievement.

“It’s good for business and something to do instead of watching the ball drop in Times Square on TV at home,” he said.

“People have been piling in all day,” shouted Rathskeller co-owner Adam Kimsey, 33, from behind the bar, before praising Tim Crabtree’s work rallying downtown business owners to offer specials and stay open late on Dec. 31. “People are getting used to the idea of coming downtown—there’s food, there’s beer, there’s something to do.”

He peeked from his vantage point at the populace before him, “Right now, I could probably name almost everybody.”

Rathskeller closed its doors at ten to midnight so patrons and employees could watch the ruby drop.

And just as Tim Crabtree’s on-stage “thank you’s” started to heat up, he interrupted himself: “Ten, nine, eight…”

Couples had a reason to kiss in the middle of Main Street, Franklin.

Franklin’s registered voters admonished to exercise their right to vote