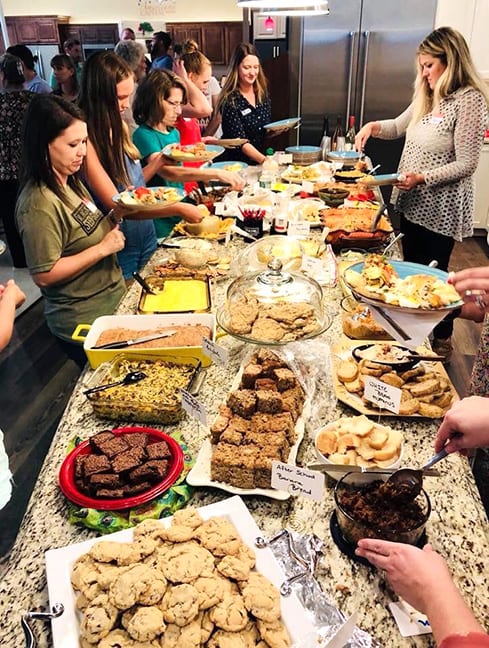 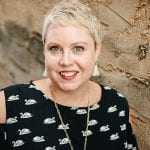 Who doesn’t like to eat, and better yet, who doesn’t like to eat when somebody else does the cooking?  Whether you’re a gourmet cook or even if you can’t fry an egg, there is a place right here in Franklin where you can eat, socialize and have a good time while tasting different dishes.

A new cooking club, aptly called “Flavor: A Cookbook Club,” has taken off in Franklin. Local business owner Amanda Shaw has taken her passion for cooking and transformed it into a monthly celebration of the palate. Shaw has always had a passion for cooking and reading cookbooks as though they were a novel, sitting in bed at night reading recipes. One of her favorite cook book authors is Vivian Howard. Shaw had the pleasure of meeting Howard in Atlanta in 2016, where she obtained a signed copy of Howard’s cookbook, which Shaw treasures.

Shaw credits an article from Serious Eats called “Why Cookbook Clubs Should Be The New Way We Entertain,” with helping her come up with the parameters on how to start a Cookbook Club. The article stated that the idea behind Cookbook Clubs is a simple one: a group of friends all make recipes from the same book and gather to share the results. It also said that a bit of magic takes place when one enters the club. Not knowing anyone can be a bit intimidating but when members walk into the kitchen clutching their bowl of homemade goodies they are warmly welcomed and soon join friendly strangers discussing the merits of the book as they serve themselves from a long table of freshly made dishes. Conversations swirl and each plate is filled with small portions of dozens of dishes. The club provides an obvious return on investment. You spend an hour making one dish and you get to taste so many. Also, in this group of avid and aspiring cooks, there is usually someone willing and eager to try the complicated recipes that others may never choose.

When Shaw decided to start a cooking club, she had no idea the response she would get from town residents. Last April she advertises her idea on social media and with the help of LT Gilbreath’s Macon Appliance Mart, she was able to secure a fabulous kitchen, which just happened to be located in the back of the store.  Gilbreath allowed her to use the spacious facility as a place to hold her cooking club. To her surprise, 65 people showed up on the first night.  Shaw had prepared a spread for the occasion but now the logistics began. She needed supplies but did not want to charge interested participants a fee. She decided to ask each member for a one time donation of $1 in order to purchase what she needed, and they graciously obliged. In order to keep the cost low she decided on China instead of paper plates and actual silverware instead of plastic cutlery. She frugally shopped stores such as Dollar General for dinnerware, glasses and cutlery. Since she and her husband own Macon Rental, they are able to supply tables and chairs for the event. Each month Amanda’s husband, Chris Shaw, hauls the tables and chairs to set up for the club members’ buffet.

“The rules of the club are, there are no rules,” states Shaw. The only thing that members need to adhere to is a monthly theme. She calls the monthly dinners, “modern potluck based on a theme.” Members cook a dish at home and then bring it to the meeting for all to share. If you don’t like to cook but you like to eat, you can bring in some napkins, soda or any other item you’d like, in order to participate and partake of the goodies.

Last month the theme was Asian, and it was a combined November and December meeting. Shaw didn’t think a holiday theme was needed and members agreed. She made Thai Basil Rolls and there were many Asian flavored chicken dishes, among other delights, to share. Next month the theme will be a recipe from a Julia Child Cookbook. Club members can use a printed cookbook, one from an online site or check out a cookbook at the library.  It doesn’t have to be complicated, just themed.  That meeting will be held on Jan. 21. All club meetings are held on the third Monday of each month at Macon Appliance Mart, 186 Depot Street. More information can be found on their Facebook page appropriately called “Flavor: A Cookbook Club” which Macon Early College student Kamryn Mason constructed for Shaw. Members post videos, photos and comments regarding recipes or ask questions about a dish. There are also reminders about upcoming club events. It’s a busy site and there are many photos of prepared foods.

“The cookbook club is a wonderful get together for people who enjoy trying new recipes as well as sharing their tried and true dishes. We all seem to enjoy sharing food, conversation, and cooking tips. Who knew that there were a group of people in Franklin who enjoy reading recipe books? You do not have to be a great cook to join our monthly feast. Just have some fun and come hungry,” said Joan Lansford.

Shaw considers this club to be a fellowship, a place for adults to get together and socialize while enjoying various dishes and sometimes even a glass of wine. She felt like this was needed in Macon County and did not want to inhibit residents with a lot of rules. She also did not want it to be “clique-y,” but instead, it has been very diverse. Members range from ages 25 through 70 and come from all walks of life. Both men and women participate. Since its inception last April, 18 to 25 members have consistently shown up at the club. The meeting starts at 6 p.m. and can last past 8 p.m. At the end of the night members all pitch in and clean up the trash and dishes are loaded into the dishwasher. Their hosts take  out the trash and empty the dishwasher the next day. There are usually plenty of leftovers for folks to pack up and take home to the family.

“Don’t feel intimidated to share your dish, we have no critics, just good food and conversation,” said Ashley Hyder.

“I have always loved cookbooks and jokes, and am a collector of them,” said Patti Harrell. “The idea of getting the opportunity to try many dishes from one book and meet new people, as well as see others I know, but don’t see often, was appealing. Time away doing something different for me is a great motivator to make this a permanent spot on my calendar. Thank you for getting this group going – what a blessing to be part of it.”

Club members were asked why Amanda’s Cookbook Club is appealing.

“The club appeals to me because I love to cook and it gives me a chance to enjoy my hobby outside of the home and to get to eat other people’s food.”

“We like to try new recipes and this gives us the guidelines to explore chefs and cuisines we might not try on our own. The food is always great and the people are very social and we get to take home leftovers.”

“I keep coming back because I enjoy the chance to network and step outside of my comfort zone of what I traditionally cook. I am a busy working mom and it gives me a night out guilt free because I can bring back leftovers to share.”

“The social interaction with people we might otherwise not get to know, and what better way to socialize than with good food.”

In the future Shaw sees a possibility for holding a children’s cookbook event. The logistics still need to be worked out but several members have express the desire to tackle such a project. Shaw is also interested in writing a cookbook, based on the dishes members cook.