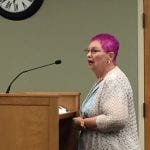 A nightmare scene of pet overpopulation, abused children without volunteers to help care for them and failing nonprofits is what local volunteer Cindy Miles painted for the Town Council in just over her allotted three minutes of public comment at its regular meeting on July 1.

All could be the result of the town’s decision to save less than 1 percent of its operating budget by eliminating $40,000 in nonprofit funding that had been a recurring, competitive pool.

The funds, like a similar $75,000 fund doled out by the Macon County Board of Commissioners, helped local nonprofits meet one-time needs and qualify for state and federal grants that require evidence of cooperation with local government.

“Do you look at the return on investment of your prior years spent money?” an admittedly nervous Miles told council members. Miles, who did not speak on behalf of any particular organization, stood at the podium as she delivered her pointed remarks. “This will eventually close lots of doors for a lot of nonprofits here.”

Cathy Howman of the Appalachian Animal Rescue Center spoke next, noting that the organization had spayed or neutered 170 animals from low income families and provided important vaccines to animals to help protect the community.

Spaying or neutering an animal at a veterinarian’s office could cost $100 to $200, she said, but the organization gets a price of about $55 and a 50 percent discount for low income families. Howman said the organization had less than $1,000 left in its account despite monthly fundraising efforts.

Asked for the moment when the funding cut was decided, who decided it and why, Town Council member Adam Kimsey said it was a joint decision, most likely made during the council’s Spring budget retreat.

“We weren’t adhering to our own standards,” he said of the way grants were distributed, noting that only about three of the 25 applicants who sought funding in the last cycle actually qualified to apply. Most were not seeking funds on a one-time, nonrecurring basis. “The process had become stale and inefficient.”

Kimsey assured that any organization could still approach the Town Council for a funding request that would be considered on a case-by-case basis and financed with monies from the town’s general fund.

Town council John Henning, Jr. provided additional insight for how the decision was made: “We asked around how other municipalities handled it, and their tax dollars weren’t going into this.”

Macon County manager Derek Roland later explained in an interview at the county courthouse how the county’s funding pool works. He said there is a standing committee that reviews all applications and decides which nonprofits merit funding. About three years ago, commissioners increased the county’s annual allocation from $50,000 to $75,000 per year, and the grants have been awarded for at least the seven years Roland has served county.

“There’s more bang for your buck,” Roland said of the community’s role in supplementing the services provided by local government. “These organizations do a great job filling the gap.”

Town Manager Summer Woodard proposed and council members agreed that the town’s biennial hosting of a joint meeting between the Town of Franklin, the Town of Highlands and Macon County representatives would be a “steak dinner for everyone.”

Mayor Bob Scott proposed using the Franklin Fire Department as a venue for the meeting.

Council member Joe Collins chimed in. “I want to do it at a place that’s classy, so to speak.”

Council member David Culpepper lamented that he would not be able to attend the event, scheduled for Tuesday, July 30, to which, Mayor Scott replied, “We’ll save you a steak.”

Rockin’ Rollie Pollie’s was ratted on.

Proprietor Roland Mock informed council members during the public comment period that the ABC ward had warned him following a tip that a guest was consuming a beer at one of his outdoor tables, which previously were partly situated on the town’s sidewalk in violation of current town ordinances for alcohol consumption.

In response, Mock changed the outdoor tables from round to smaller square tables, moved them closer to his building and set up a movie-theater like rope line to create the required “physical barrier” for alcohol consumption.

“I’m turning away customers left and right because they have pets and they want to sit outside and have a beer,” he said. “They just get mad.”

“If we expect people to be downtown in the evening hours, that’s going to be a problem,” said Collins. “We need to look at this.”

To which Mayor Scott announced, “Times are changing.”

for fire substation in North Franklin

Franklin Fire Chief Matt Breedlove called on town council members to consider buying a used pump truck that would fill a long-standing deficiency and maintain the town’s ISO rating, a score given to each fire department based on its ability to respond to a home fire and used for insurance purposes.

The 1997 Ford F-800 Fire Pumper from Jackson County is capable of delivering 1,250 gallons per minute, and has been on loan to Franklin for the past month.

“For our next ISO inspection, we would be fully equipped and it would go in service tested and running great,” said Chief Breedlove. The fire truck has just over 13,000 miles and 1,200 pumping hours. The Fire Chief said a similar truck could cost $40,000 plus another $50,000 in equipment, while the Cashiers Fire Department’s asking price is $62,500.

Council members gave the green light to Breedlove to use $38,000 in his budget plus an additional $22,000 from the fund balance to negotiate for the truck.

The town also okayed exploration of a possible property trade to acquire land on 441 North that may be used for the site of a future fire substation.

Town Planner Justin Setser called on citizens to participate in a three-day charrette July 17-20 to provide feedback for the town’s comprehensive plan. The events planned and the opportunity to provide feedback are available online at franklintownplan.com.

“Some information is kind of alarming,” Setser said, trying to entice council members and the half-dozen or so members of the public and media in attendance to explore the website. Setser said a bus will ferry residents around town to better visualize comprehensive plan proposals.

Shriners Club members were on hand for the entire Town Hall meeting to help promote 80s Flashback Weekend, Aug. 2-3. The event in downtown Franklin will benefit the Greenville Shriners Hospital for Children.

Beware the bears? Some bare facts from wildlife experts