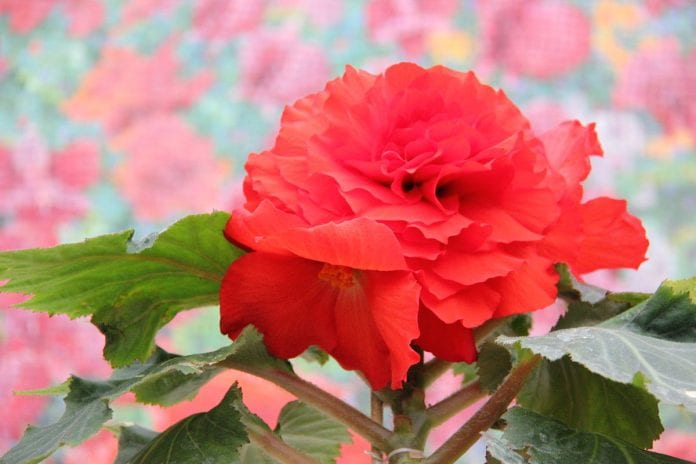 I think it accurate to say that we all have an obsession or two.  Some are private and others might be more obvious.  I am not going to admit to mine but if you have read this column for a while you might guess a couple.  I knew a group of gardeners who are obsessive about their collections of plants.  They even have an informal organization and called themselves “plant nerds.”  (Webster defines a nerd is an intelligent but single-minded person obsessed with a nonsocial hobby or pursuit).  Once or twice a year they traveled to obscure nurseries looking for the rare, unusual, uncommon or the one of a kind.  But the biggest plant nerd I have read about is the North Korean leaders Kim Il-Sung and his son Kim Jong Il.  It all started when the Indonesian government presented the father an orchid named in his honor – “Kimilsungia.”  Extensive Korean greenhouses were built nation wide to grow this orchid.

After the father died, the Japanese presented Kim Jong Il a tuberous begonia named in his honor – “Kimjongilia.”  The dictator became totally obsessed with his begonia and was determined not to be outdone by his father’s orchid.  He proclaimed the begonia the state flower.  He built highly technical greenhouses all over the country to induce this plant to bloom on his January birthday.  Its normal bloom time is mid-summer. He also established the largest tuberous begonia-breeding project in the world. In the summer the begonias were planted in fields.  Kim Jong Il would fly over in a helicopter to pick out his favorite colors.  His hybrid begonias were entered in international flower shows.  The prized plants were flown to exhibits in a cargo plane. One person would carefully hold a single plant to avoid damage. Reportedly his chief begonia breeder became so well known and respected for his skills that Kim Jong Il had him killed.

During the father’s and son’s reigns, hundreds of thousands of North Koreans starved to death, equal numbers were imprisoned and even more attempted escape into China and South Korea, thousands were caught and killed.

The intense red flower of Kimchongilia can measure up to 10 inches in diameter.  It was proclaimed to symbolize wisdom, love, justice and peace.  There is even a song entitled “Kimjongilia.”  On Kim Jong Il’s 63rd birthday there was a flower show featuring 30,000 Kimjongilia each in bloom.  It was proclaimed the “king of flowers.”

Begonias comprise a large family of plants, 1,400 species.  We are most familiar with fibrous begonias that we treat as annual bedding plants.  Another popular group are Rex Begonias that have elaborately colored leaf patterns.  The Kimjongilia begonias are tuberous types with a round saucer shaped tuber about 3-4 inches in diameter.  The concave side is where the stems develop and the convex side produces roots.  They are not winter hardy but can be stored from one season to the next.  These begonias produce beautiful flowers that come in orange, yellow, white, red and pink.  The blooms can be single or doubles with plain, ruffled or toothed edges.  They will bloom all summer in bright shade.  There are even varieties that do well in hanging baskets.  A good review on growing these fabulous plants is hhp://www.extension.umn.edu/yardandgarden/ygbriefs/h119begonias

Oddly enough I could not find a retail source for Kimjongilia.  But then this fits the theme of this story – odd.  But there are plenty of sources of tuberous begonias many from England.  Take a look at White Flower Farm’s catalog as one example.

Many of the facts reported above originated in the November – December 2011 Plants Delights Nursery, Inc. newsletter, a free publication full of great and humorous information.

Courthouse to be outfitted with Charters of Freedom monument