survived by her parents, Sandra Vannoy of Franklin and Barry Vannoy of Monroe, N.C.; three children, Justin Michael Heater of Clayton, Ga., and Patrick “Isaiah” Burgess of Franklin; two grandchildren, Felicity Beth Heater and Brantley Isaac Heater; and two sisters, Cindy Vannoy and Tonya Vannoy. She was preceded in death by her husband, Charles ‘Pat’rick Burgess. She was a member of Burgess Chapel church. Memorial services will be held at Memorial United Methodist Church Saturday, June 30, at 1 p.m.

Monroe, La., he was the son of the late Chester and Earldale Roberts.  He was also preceded in death by a son, Clint Roberts. He was a US Army veteran; a retired union carpenter and attended Windy Gap Baptist Church. He is survived by his wife, Martha Roberts of Franklin; son, Mike Roberts and wife Lisa of Denham Springs, La.; son, Martin Allen Roberts of Gonzales, La.; daughter, Michelle Strain and husband Duane of Franklin; and sister, Peggy Hammond of West Monroe, La.; five grandchildren, Austin and Haley Roberts of Denham Springs, La., Clint Anthony Roberts of Gonzales, La., Corp Clint Strain, USMC of Norway and Cody James Strain of Franklin; and one great grandchild, Bryson Roberts of Texarkana, Ark.  Funeral service was held Thursday, June 7, in the Chapel of Macon Funeral Home. Rev. Greg Rogers and Rev. Mark Bishop officiated. Burial was in the Hillcrest Memorial Gardens in Baker, La. Memorial donations can be made to the Shriners Hospitals for Children. Online condolences can be made to the family at www.maconfuneralhome.com.

residence after battling a rare cancer for almost 10 years.  He was born Nov. 24, 1971, at Whiteman Air Force Base, Mo., son of James and Esther McGruder of West Chester, Ohio.  He was married to Catherine John McGruder for six years, who survives him.   He was employed at Unisys in the IT department.  As a high school student, he was awarded and honored as a Kentucky Governor’s Scholar. He went on to earn his Bachelor’s of Computer Science and Math degrees from Northern Kentucky University. He was an ardent fan of “Star Wars” and enjoyed playing board games with friends.  He enjoyed going to family reunions and sport shooting with his family.  He loved to read.  Give him a book and he would sit in the corner reading for hours and be perfectly content.  He had traveled to several different places outside of the United States including: Malaysia, Russia, England, Scotland and Germany. He was involved in community affairs; he taught Sunday School at Landmark Baptist Church and helped out with their sound system.   In addition to his wife and parents, he is survived by his son, Ezekiel Luke McGruder; nephew, Isaac Samuel; parents-in-law, John and Padma Walters; sister-in-law, Cynthia John; brother-in-law, Christopher (Hardeep) Walters and many aunts, uncles and cousins.    He was preceded in death by his paternal grandparents, Wren and Verneal McGruder of Harviell, Mo., and his maternal grandparents, Carl and Ruby Taylor of Cape Girardeau, Mo. Funeral service was held Saturday, June 2, at Landmark Baptist Church in Batavia, Ohio, under the direction of E.C. Nurre Funeral Home in Amelia, Ohio.  Brandon Little officiated.  Interment was at Mt. Moriah Cemetery in Withamsville, Ohio.   In lieu of flowers, memorial contributions may be made to Ezekiel Luke McGruder, c/o Catherine McGruder, 3855 Golden Meadow Ct., Amelia, OH  45102 for his educational fund.  An online tribute wall is available at www.ecnurre.com.

Evelyn Bancroft, 82, of Franklin, N.C., passed away at The Homestead in Clyde on June 3, 2018. She was preceded in death by her loving husband, Raymond Lowell Bancroft. She is survived by her son, Douglas (Terry) Bancroft; daughters, Karen (Kelly) Curry and Joy (Ed) Brendle; eight grandchildren; six great-grandchilden and one on the way. She was active in the Senior Games in Macon County, volunteered at the Smoky Mountain Performance Arts Center and was in the Red Hat Society. She was an avid bowler and volunteer at the Senior Center. She enjoyed arts and crafts and playing cards. A Celebration of Life Party will be held on June 30, from 1 to 4 p.m., at the Franklin Recreation Center . Wear your red hats and Senior Games tee-shirts. Smoky Mountain Cremations and Funeral Service of Clyde is caring for the family and the online register is available at www.smokymountaincremations.com.

Saturday, June 9, 2018. Born in Wylam, Ala., she was preceded in death by her parents, Olen and Eunice Walker; her husband, Luther Jones; two brothers, James Robert Walker and Olen Walker Jr.; and sister, Eunice Hayes. She is survived by two children, Edward Jackson Jones of Sanford, Fla. and Susan Elizabeth Jones of Middleburg, Fla.; and several nieces and nephews. Funeral service will be held Saturday, June 16, at 2 p.m., in the Chapel of Macon Funeral Home.  Rev. Tom Fisher will officiate.  Burial will be in the Woodlawn Cemetery. The family will receive friends one hour prior to the service at Macon Funeral Home. Memorial donations can be made to Harris Hospice, 81 Medical Park Loop Suite 204, Sylva, NC 28779. Condolences to the family at www.maconfuneralhome.com. 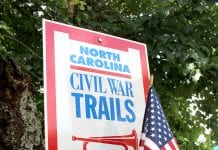