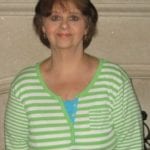 Stephanie Lynn Bowman (Stevie), 65 of Hendersonville, N.C., formerly of Franklin, passed away peacefully the morning of Tuesday, Sept. 11. She was the daughter of the late Goodlow and Rebecca Bowman of Franklin. She was the department head of medical records at St. Lukes Hospital in Columbus, N.C., for many years. She was sweet and kind and had a special place in her heart for her grandchildren whom she loved very much. She will be greatly missed and never forgotten by her beloved family and friends fortunate enough to have been a part of her life. She leaves behind her son, Jeffery Williamson and wife Jody; and two grandchildren, Mason and Avery; her sister, Debra Lamb (Flaughn); several nieces and nephews and her beloved cat Max. A memorial service was held Saturday, Sept. 15, in the chapel of Bryant-Grant Funeral Home. In lieu of flowers, contributions may be made to a favorite charity. Online condolences may be left at www.bryantgrantfuneralhome.com Bryant-Grant Funeral Home & Crematory is serving the Bowman family.

Herbert “Tim” Francis Holt, 82, of Highlands, N.C., and formerly of Miami, Fla., passed away Monday, Sept. 17, 2018. Born in Lowell, Mass., he was the son of Gaylord and Helen Holt. He was a retired Coral Gables Police Officer in the state of Florida.  He enjoyed golfing, riding motorcycles, and camping. He is survived by his wife, Nancy Holt; children, Russell Jones and Scott Jones; sisters, Dottie Tumblin and Gail Howell; brothers, Peter Holt and Rick Holt; and four grandchildren. A Celebration of Life service will be held at a later date. Macon Funeral Home is handling the arrangements. Condolences can be made to the family at www.maconfuneralhome.com.

Thomas “Gene” Eugene Gill, 75, of Franklin, N.C., passed away Sunday, Sept. 17, 2018. Born in Fort Lonesome, Fla., he was the son of the late Thomas Gill and Ruby Mae Watson.  In addition to his parents, he was preceded in death by two sisters, Gladys Parks and Shirley Sturgeon. He worked for the Hillsborough County Government as a Construction Supervisor in Florida. He enjoyed doing for others, operating heavy equipment, and fixing things.  He would like to be remembered as a friend. He is survived by his wife of 54 years, Shirley Harvey Gill, of Franklin; son, Donald Gill (Micki), of Tampa, Fla.; daughter, Diane Gregory (Steve), of Tampa, Fla.; brother, James Gill, of Plant City, Fla.; seven grandchildren; five great-grandchildren; and several nieces and nephews. A Celebration of Life service will be held at a later date. In lieu of flowers, memorial donations can be made to Hospice House Foundation of WNC, PO Box 815, Franklin, NC 28744.  Macon Funeral Home is handling the arrangements. Condolences may be made at www.maconfuneralhome.com.

Dale Seay, 70, of Port St. Lucie, Fla., passed away peacefully at home on Aug. 19, 2018, following a long battle with Lewy body and Parkinson’s diseases. The son of the late Charles and Mary Seay, he grew up in Franklin and he lived there until he went into the Army at age 19 to serve in Vietnam. Following his time in the Army he got involved in construction and eventually moved to Atlanta to pursue his career. He enjoyed a very successful career as a residential home builder, eventually starting his own company and building many homes in the Atlanta area. He is survived by his wife, Denise Reimann-Seay; his sister, Jennifer Watts; brother, Danny Seay; daughter, Jennifer Jones; and grandsons, Vince Boyce and Treyton Jones. A memorial service will be held Saturday, Sept. 22, at 3:30 p.m., in the Chapel of Macon Funeral Home.  Rev. Roy Lowe will officiate.  Condolences may be made at www.maconfuneralhome.com.

Sgt. 1st Class Ronald “Ronnie” Wayne Webb, 62, of Sylva, N.C., succumbed to cancer at the comfort of his own home in the loving embrace of his wife, Alice, on Sept. 13, 2018. SFC Webb enlisted as an Infantryman, following graduation from Sylva-Webster High School. The “Sarge” dedicated 20 years to the service of his country, retiring from the U.S. Army in 1995. He loved fishing, watching the Atlanta Braves, and singing while playing guitar, especially for his Zion Hill Baptist Church family. He was always there to lend a helping hand to relatives and friends for whatever people needed him for. He is survived by Alice, his wife of 23 years; daughters, Angela Webb, Susan Kowalsky (Kevin Kowalsky); son, Chad Ronald Webb; loving uncle to Austin Young; sister, Shirley Webb Guffey (Wade), and dear friend Else Cunningham. He was a loving father, husband, and friend to everyone. He was preceded in death by his parents, Elvin and Madge Frady Webb; and a sister, Judy Webb Byrd. A special thank you to the Four Seasons Hospice Team and Ben Sutton of the Charles George VA Medical Center Respiratory Therapy Department, for their loving care and support during his final days. The family will receive friends and family on Thursday, Sept. 20, from 6 to 8 p.m. at Bryant-Grant Funeral Home & Crematory in Franklin. Funeral services will be at Zion Hill Baptist Church in Sylva on Friday, Sept. 21, at 2 p.m. He will be laid to rest at Zion Hill Baptist Church Cemetery. An extended celebration of life will be held at the Pumpkintown Community Center following the services. Pallbearers will be Ernest Franks, Bruce Rish, Scott Vinson, James Monteith, Paul Rogers, Mark Rath and RV Johnson. Flowers can be sent to the Bryant-Grant Funeral Home & Crematory at 105 West Main Street, Franklin, NC 28734. Memorial donations may be made to the Zion Hill Baptist Church Cemetery Fund in care of Mary Wilson, 3110 Pumpkintown Road, Sylva, NC 28779. Online condolences may be left at www.bryantgrantfuneralhome.com Bryant-Grant Funeral Home and Crematory is serving the Webb family.

Joy Marie Moon Huddlestun, 73, passed away Wednesday, Sept. 12, 2018. She was born Sep. 15, 1944, in Oneida, N.Y., to the late Wells Arthur Moon and Jane Collins Moon who survives. She worked in Car Auctions, the health department in Kissimmee, Fla.; and owned and operated a plumbing store in St. Cloud, Fla. She loved animals and birds. In addition to her father, she was preceded in death by her husband, Carl Huddelstun; and a brother, Skipper Moon. In addition to her mother, survivors include a daughter, Lisa Burns (John) of St. Cloud, Fla.; two sons, Robert King and Daniel King both of Missouri; four grandchildren, Amanda Lassabe, Regan King, Dustin King, and Baylee King; five great-grandchildren, Kody Lassabe, Kade Lassabe, Knox Lassabe, Aria Johnson, and Alani Johnson; and a brother, Al Moon (Cheryl). A private family service will be held. Online condolences may be made at www.bryantgrantfuneralhome.com. Bryant-Grant Funeral Home & Crematory is serving the Huddlestun family.

Betty Sue Wiggins, 72, of Franklin, N.C., went to be with her Lord Saturday, Sept. 15, 2018. Born in Macon County, she was the daughter of the late Belton Waldroop and Annie Mae Dills Waldroop.  In addition to her parents, she was preceded in death by her husband, Clyde Wiggins; and her siblings, Turner Anderson, Blanche Fouts, Belvia Anderson, Pauline Troup, and George Anderson.  She was a member of Sugarfork Baptist Church where she served as a Sunday School teacher, WMU leader, and Vacation Bible School teacher.  She loved arranging flowers and cooking.  She is survived by her son, Michael Wiggins of Franklin; sisters, Christine Hurst and Clara Massey of Franklin, Josie Mullins, of Knoxville, Tenn.; brothers, Claude Waldroop and Clifford Waldroop of Franklin, and Carl Anderson of Susanville, Calif.; and several nieces and nephews. Funeral service was held Wednesday, Sept. 19, at Sugarfork Baptist Church.  Rev. Gene Hawkins, Rev. Michael Stephens, and Rev. Steve Reeves officiated. Burial was in the church cemetery. Pallbearers were Tony Hurst, Scott Hurst, Bill Mullins, Jamie Waldroop, Conner McCall, and Steve Anderson.  The deacons of Sugarfork Baptist Church will serve as honorary pallbearers. Condolences can be made to the family at www.maconfuneralhome.com.