Born in Swain County, she was the daughter of the late Hanson Ammons and Selma Forrester Ammons.  In addition to her parents, she was preceded in death by an infant son, Lemuel Eugene Angel and brother, Odell Ammons. She retired as a child nutritionist from Macon County Schools.  She enjoyed reading, gospel music and working with children.  She will be remembered as a loving wife and mother.

She is survived by her husband of 59 years, Rev. L.E. Angel; daughter, Teresa Angel of Franklin; one sister, Aileen Ammons Winchester of Bryson City; sister-in-law, Willa Bell Ammons of Bryson City and several nieces and nephews.

The family would like to express their appreciation for the wonderful care given to Verda by the staff of CarePartners Hospice and request donations can be made in her memory to 170 Church Street, Franklin, NC  28734.

Shirley McGaha Vanhook, 75, of Franklin, N.C., passed away Friday, June 23, 2017. She was born in Macon County, the daughter of the late Judd and Cleo Shuler McGaha.

She was a Certified Nursing Assistant and she was a life member and former president of VFW Ladies Auxiliary.

She was a loving mother and grandmother and was a very sweet and kind person to everyone. She was a member of Franklin Seventh Day Adventist Church.

In addition to her parents she was preceded in death by a sister, Vernice McGaha and a brother, Carlos McGaha.

A memorial service was held Wednesday, June 28, in the chapel of Bryant-Grant Funeral Home and Crematory with Pastor Glenn Marshall officiating. Burial followed at Woodlawn Cemetery.

Gus “Buddy” Bahruth was born Aug. 14, 1936, in Babylon, N.Y., the son of Gustav H. and Anne Bahruth. He married his high school sweetheart Joan Conway in 1956 and moved to Ft. Myers, Fla., where he spent more than 40 years in the commercial shrimping industry. They moved to Franklin, N.C., which became their second home and then followed their life-long dream of living aboard and traveling on their favorite boat, The Nomad.

His passion was his family. He was preceded in death by his wife Joan in May 2012. He is survived by his brother, William H. Bahruth and by Gus and Joan’s six children: John and Cathy (Bahruth) Makinson of Franklin, Julie (Bahruth) Kennedy and Annamarie Bahruth of Punta Gorda, Fla., Gustav J. and Maria (Wagner) Bahruth, Michael Bahruth, and Matt and Terri (Bahruth) Boner of Ft. Myers, Fla.; 12 grandchildren and 19 great-grandchildren

A memorial service celebrating his life will be held Sunday, July 2, at 1 p.m., at Covenant Presbyterian Church, 2439 McGregor Blvd. Ft. Myers, Fla. Gus requested that those who love him rejoice at his going home to be with Jesus and to be joined with his wife Joan. The family encourages service attendees to wear bright, colorful attire as that is what Dad wanted.

Born in Franklin, she was the daughter of Parker Gregory and Leila Woodard Greig. In addition to her parents, she was preceded in death by four brothers, Keith, Hayes, Bill and Charles Gregory and one sister, Ruby Ammons. She attended Auburn University and was a graduate of UNC Greensboro. She was a Home Economics teacher and worked with the Unemployment Security Commission; she served as a WIC director and worked with the mentally handicapped. She was a member of First United Methodist Church. She was an avid gardener and enjoyed tending her orchids. She also enjoyed cooking and knitting. A lover of culture and travel, she visited more than 15 countries across five continents. In recent years, she adored spending time with her two dogs and two granddaughters.

She is survived by her husband of 57 years, William Grant Greig; her son, Grant Stephen Greig and wife Anne of Seattle, Wash.; one brother, Wayne Gregory of Leicester, N.C., and two granddaughters, Evelyn and Lillian Greig.

A memorial service will be held at 11 a.m. Thursday, June 29, at First United Methodist Church. Rev. David Beam and Joanna Johnson will officiate.

She spent 50 years teaching Sunday school and 20 years as church clerk at Longview Baptist Church. She loved to cook and make jams, jellies and cakes.

Born in Wintersville, Ohio, he was the son of the late Earl D. Fletcher and Doris Gosney Fletcher.  In addition to his parents, he was preceded in death by his wife, June Kirkpatrick Fletcher.

As a young man, he was a star athlete, specializing in baseball.  He loved fast cars, playing cards and spending time with childhood friends that have remained close throughout his life.  He was a skilled brick mason and carpenter, building his own home in Franklin in the mid-’80s alongside his wife, kids and friends for labor.  It was in that very home that he passed with loving family by his side.

He is survived by three daughters, Mandy Fraher and husband Pat of Madisonville, La.; Ashley Sorensen and husband Erik of Lynchburg, Va.; and, Jami Fletcher of Franklin; four grandchildren, Torr and Finn Sorensen, and Sydney and Fletcher Fraher; one aunt, Margaret Gosney of Wintersville, Ohio, and many cousins.

A breakfast reception honoring his life was held in his favorite place, Sunset Restaurant in Franklin, NC on Saturday, June 24.

Born in Macon County, he was the son of the late Lawrence H. Long Sr. and Annie Laura Sprinkle Long.  In addition to his parents, he was preceded in death by a son, George Edward Long Jr. and a brother, Lawrence Long Jr.  He was a member of Windy Gap Baptist Church and retired from Zickgraf Hardwood Flooring.

He is survived by his wife of 55 years, Devannah Woods Long; three sisters, Laura Belle Guffie and husband Zeb Jr., Louise Roper and Barbara Mashburn all of Franklin; and several nieces and nephews.

Born in Macon County, he was the son of the late Clyde Norton and Irene Hurst Norton Dowdle.  In addition to his parents, he was preceded in death by a brother, Dale Dowdle.

He was a U.S. Army veteran and retired from Western Carolina University where he worked as director of auxiliary service. He had a great love for music and was a talented musician and song writer.

He is survived by his wife, Charlene Moses Norton; son, Jonathan Dowdle (raised by Billy and his second wife, Kate Roellqen) of Asheville; two brothers, Howard Dowdle and wife Heather and Curtis Dowdle and wife Kathi all of Franklin; sister, Jenny Leopold and husband Adam of Florida; several nieces and nephews and his cousin Mike Crisp who was his best friend and fellow musician.

Born in Macon County, she was the daughter of the late Alex Rozell Fouts and Hazel Dewees Fouts.  In addition to her parents, she was preceded in death by her husband, Paul Childers and three brothers, Lewis, James Reid and Claude Fouts.  She was a retired school teacher. She was an active member of Iotla Baptist Church and enjoyed teaching, sewing, quilting and reading.

She is survived by nephews, Junior Fouts and wife Carolyn and Larry Fouts and wife Aylen of Franklin, who were her caregivers, and several other nieces and nephews.

James “Jim” Waldroop, 87, of Franklin, N.C., passed away Wednesday, June 21, 2017.  He was born in Macon County, the son of the late Julian and Elizabeth Anderson Waldroop.  He had worked as a State Highway Patrolman and was a U.S. Army veteran.  He liked farming and trout fishing as well.  He was a member of First United Methodist Church of Franklin.

A funeral service was held Saturday, June 24, in the Chapel of Bryant-Grant Funeral Home and Crematory, with Rev. Neil Moore officiating.

Bryant-Grant Funeral Home and Crematory is serving the Waldroop family.  Online condolences may be made at www.bryantgrantfuneralhome.com. 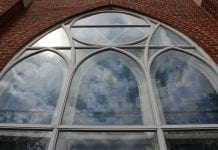