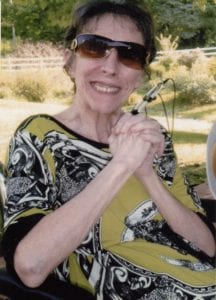 Anita Louise Wiberg Norton, 71, of Franklin, N.C., passed away Tuesday, Nov. 7, 2017. She was born in Sydney, Australia, the daughter of the late Erik Wiberg of Sweden and Marjorie Watts Wiberg of Australia. She was a successful business woman. She was an agent in the real estate business, she was one of the original cashiers at the first Ingles Store in Franklin, and she owned a children’s clothing store and a restaurant. She was very artistic and talented and enjoyed painting, needlepoint, stained glass and photography. She fought a good fight against Multiple Sclerosis for 26 years.

Survivors include her husband of 48 years, Richard “Rick” Norton; one son, Darryn Norton (Kerryanne) of Greenville, S.C., and a sister, Linnea Wiberg MacKay of Sydney, Australia.

Bryant-Grant Funeral Home and Crematory is serving the Norton family.

Elizabeth S. Densmore, 85, died Tuesday, Nov. 7, 2017. She was born Nov. 2, 1932, in St. Louis, Mo., to the late Louis Edwin Straub and Nellie Hugon Straub. She was married to the late Neal H. Densmore. She worked many years in the retail business and was a volunteer for a shelter for battered women of domestic violence. She love to play cards, Mahongg, working out at the gym, working with plants, and loving on her cat. She was also of the Christian Science faith.

A private service will be held at a later date.

Online condolences may be left at www.bryantgrantfuneralhome.com

Born in Mechanicsburg, Ohio, she was the daughter of the late Samuel Francis McIntire and Blanche Higgins McIntire. In addition to her parents, she was preceded in death by her sister whom she loved dearly, Martha Hildebrand.

She was a devout member of Hickory Knoll United Methodist Church, where she was a part of the Lydia Women and became a Lay Speaker of the church. She was very involved at church; especially with Bible studies and Sunday School. She loved to crochet and was an avid Ohio State Buckeye’s fan.

A funeral service will be held at 2 p.m., Saturday, Nov. 18, at Hickory Knoll United Methodist Church. Rev. Stephanie Thompson and Rev. Paul Sears will officiate. Burial will be in the church cemetery.

Visitation will be held from 1 to 2 p.m., prior to the service at the church.

Born in the Holly Springs Community, he was the son of the late John and Bertha Carroll Ashe.

He was a World War II veteran, serving honorably in the U.S. Navy in the Pacific Theater. After the war, he opened a garage, specializing in the repair of Jeeps and tractors. He enjoyed helping others, spending time with friends and family, hunting, and fishing. He was first a member of Holly Springs Baptist Church and later, Wells Grove Baptist Church.

In addition to his parents, he was preceded in death by his wife, the former Ruth Ray; son, Dennis Ashe; siblings, Jim Elzie, and Wiley Ashe and brother who died in infancy. He is survived by a daughter, Linda Ashe.

Per Logan’s wishes, a graveside service was conducted by members of the American Legion and the VFW with full military rites. Interment was in the Jennings Cemetery beside his beloved wife.

She was born in Charleston, Illinois on June 15, 1919, to Frank and Gertrude (Fagan) Lee.  She was raised there until 1935 when the family moved to Iowa City, Iowa.  She graduated from City High and attended the University of Iowa.  There, she met Donald Weiss of Denison, Iowa, and they were married in California while he was in flight school in the U.S. Army Air Corps, in 1942.  Don was killed over Normandy in June 1944. She married Arthur Fischbeck of Mason City in 1947. They settled in Mason City where Art was an insurance agent and she was a homemaker raising their three children and volunteering in the community.

She was an active member of P.E.O., Mason City Women’s Club, MacNider Art Museum, YWCA, and the First Presbyterian Church. She  expanded her knowledge and experiences throughout her life by enjoying reading, gourmet cooking, golfing, playing bridge, and traveling.  She also loved collecting antiques.  A budding artist and a natural clown, she took her outgoing personality and sense of humor into her every endeavor.

She was preceded in death by her husbands, Don Weiss and Art Fischbeck, and daughter-in-law, Rhonda Fischbeck.

Memorial services will be held at a later date.  Inurnment will take place in Elmwood-St. Joseph Cemetery. Memorials may be directed to Hospice of North Iowa, First Presbyterian Church or donor’s choice.

James Burgess, 82, of Franklin, N.C., passed away Saturday, Nov. 11, 2017.  He was born in Macon County, the son of the late Charlie and Carrie Penland Burgess.  He worked for the Town of Franklin, he liked hunting, fishing, and walking his dog.  He attended New Bethel Baptist Church.  In addition to his parents, he was preceded in death by his wife, Elouise Louise Burgess.

A funeral service will be held Thursday, Nov. 16, at 2 p.m., in the Chapel of Bryant-Grant Funeral Home, with Rev. Mozart Moliere officiating. Burial will be in Woodlawn Cemetery.  Pallbearers will be Michael Chavis, Willis Chavis, Greg Hall, Jeremiah Manning, Larry Manning and Tracy Wright.  The family will receive friends from 1 to  2 p.m., prior to the service at the funeral home.

Bryant-Grant Funeral Home and Crematory is serving the Burgess family. Online condolences may be made at www.bryantgrantfuneralhome.com.

Robert Francis Goebel, 92, sailed away for home on Nov. 6,  2017, after an extended illness. He was born in Brooklyn, N.Y. He grew up in the Catholic Faith. He joined the United States Coast Guard after Pearl Harbor and served until 1946.

He was the son of the late Edward James Goebel and Ruth Friend Goebel.

He was preceded in death by his son, Robert Eric Goebel (Vietnam Veteran) 1978 and his first love, first wife of 44 years, Jeanne Seagren Goebel 1991.

He was a member of American Legion Post 104, Sylva. One highlight of his life was the Honor Air Flight to Washington DC to see the war memorials. He enjoyed making stained glass pieces and wood burning and other crafts and visiting with other veterans.

His son Ed says “Dad was easy going, a friend to everyone, and was cherished by those who knew him.”

In lieu of flowers, donations may be made to Savannah Fire Department and First Responders of Sylva, or Four Seasons Hospice (www.FourSeasonsCFL.org

An online registry is available at:  www.appalachianfuneralservices.com.

William Frederick Ogden, 92 of Franklin, N.C., has died in the Lord.

Born in Mt. Clemens, Mich., he was the son of the late William S. Ogden and Clara Schock Ogden.  In addition to his parents, he was preceded in death by a sister, Joy Claire Golden and a brother, David Ogden. He was a WWII U.S. Marine veteran; member of Resurrection Lutheran Church where he served as usher and Bible study teacher; former owner/operator of Sugartown Donut Shop, draftsman/owner of Bill’s Plan Service and construction foreman for William J. Scarr Company.

A memorial service will be held at 1 p.m., Saturday, Nov. 18, at Resurrection Lutheran Church.  Pastor Patrick O’Neal will officiate.

A graveside service will be held Thursday, Nov. 16, at 2 p.m. at Gethsemane Memorial Park, officiated by Rev. Patrick Whaley.

Online condolences may be made at www.mundenfuneralhome.net