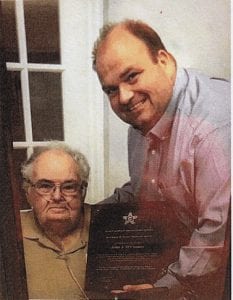 John J. O’Connor, member of the Fraternal Order of Police WNC Macon-Jackson Lodge #81 has been given the 2019 Mark R. Tucker Memorial Award.

O’Connor began his law enforcement career in February 1956 with the Port Authority Police Department in New York and New Jersey, giving more than 20 years of public service to the citizens of that area. After retiring in 1976, O’Connor worked in hospital administration for another 20 years and ultimately landed in Franklin. Here, he and his wife, Fran, owned and operated a mountain cottage rental business for a number of years. He also served as a volunteer at the Macon County Sheriff’s Office front desk for several years, but apparently, he was not done yet.

O’Connor  was one of several people responsible for organizing and chartering Lodge #81 in March 2002 in Franklin. He served as a Lodge Trustee for several years before taking on the position of Lodge Secretary serving for more than 14 years before health issues forced him to step down about a year ago. During his tenure as secretary, he organized and recorded lodge minutes; published a monthly newsletter; handled membership applications, dues payments and late notices, death benefit filings, IRS tax filings; and numerous other administrative matters. He became known as the “answer man” with information provided within minutes.

O’Connor has attended the “Leadership Matters” seminar at the Grand Lodge headquarters in Nashville, Tenn., and numerous state lodge board meetings and conferences.

O’Connor has further served the community working concession stands at softball games, sold raffle tickets for a pickup truck, rifles, lawn mowers and money drawings. He’s worked Lodge yard sales, barbecue dinners, Shop with a Cop gift wrapping, Christmas parades, LEO Memorial Services, and more. He is the one who is there to set up and doesn’t leave till the last light is out. According to his nomination letter, “He is the glue that held our lodge together for years.”

The Mark R. Tucker Award was established to honor Fraternal Order of Police members who display dedication and tenacity in the furtherance of the ideals and values of the Fraternal Order  of Police. Mark Tucker began his career in law enforcement in 1976 with the Wake County Sheriff’s Office, serving in many capacities telecommunications, road deputy and was one of the original members of C platoon. He was on the first Warrant Squad, became a boat team member and worked in Judicial Services. In 1999, Tucker was appointed U.S. Marshal for the Eastern District of North Carolina. In 2002, he returned to his roots and was hired as an investigator with the Wake County Sheriff’s Office. On Feb. 12, 2004, during an investigation, Tucker was shot and killed. During his career, he held the position of president of the Wake County Fraternal Order of Police for Lodge #41. The N.C. State Lodge Fraternal Order of Police established a Memorial Award which has been presented to eight members since 2004.