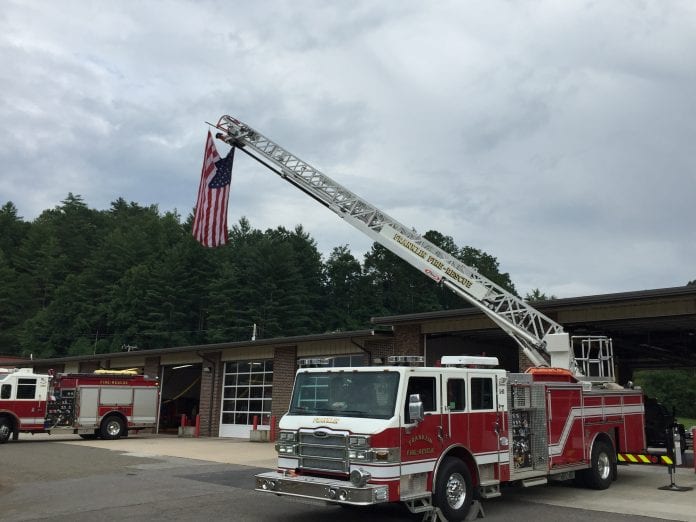 The Franklin Volunteer Fire Department truck bay doors were open Tuesday night as 35 representatives and employees from the towns of Franklin and Highlands and Macon County joined local journalists and one community member to discuss accomplishments and aspirations over steak and baked potatoes.

“If you’ve never had a firehouse steak, you don’t know what you’re missing,” Franklin mayor and event host Bob Scott, 78, proclaimed at the outset of the annual joint meeting.

Scott introduced his representatives in attendance including a brief mention of Vice Mayor Barbara McRae, 76, with whom he is vying to retain his mayoral seat in the Nov. 5 election. He then headlined his list of accomplishments with the parallel parking lines drawn on the north side of Main Street.

Scott proudly declared Franklin came in at number 25 on the North Carolina Chamber of Commerce’s Best City to Live in North Carolina list, a ranking compiled based on median earnings, employment, number of full-time residents, quality-of-life and other factors.

“Franklin continues to be a Mecca for festivals,” the mayor continued, noting Saturday evenings’ music event Pickin’ on the Square is in its 21st year and Pumpkin Fest is in its 23rd year.

“Children rolled more than 700 pumpkins this year,” the mayor said. “Showing that there is a valid use for pumpkins.”

“Our meetings are so much about partnerships,” said Taylor, who leveraged a close relationship with Macon County Board of Commissioners chairman and Highlands resident Jim Tate to help win major renovations to the Highlands Performing Arts Center.

The mayor of the wealthy mountain plateau town led his list of accomplishments with fiber-optic lines, “Fiber to every citizen and every home in Highlands.”

The town’s $4.6 million investment in constructing the network, in partnership with local broadband provider JBL Communications, will ensure what Taylor considers to be a public utility is complete within 300 days. Taylor said he was forced to act because the North Carolina House failed to pass HB 29 and HB 431 to expand high-speed Internet access in rural areas.

After the lesson in public-private partnerships to meet a community demand, Scott returned to the podium to ponder a historical reference for reaching mountain residents.

“We should look at what TVA [Tennessee Valley Authority] did years ago to bring electricity to those coves and hollows,” he said as a potential solution for providing Internet to Franklin residents. Scott then invited attendees to climb the 75-foot firetruck ladder parked out front or have a town tour in a 1937 firetruck. He had no takers.

Vice Mayor McRae, for her part, told The Macon County News she believes it’s time for change in the mayor’s office.

“I have a lot of things I want to get done,” she said, noting that her leadership style is different from Scott’s, who is seeking his fourth two-year term.

While acknowledging that the non-voting mayoral position seems to have less power than her current voting position on the Town Council, McRae believes the job would give her the public voice to set the tone and vision for the goals she has in mind.

“I think I would do a better job of building coalitions and partnerships,” said McRae, who spearheaded the town’s contentious partnership with the Eastern Band of the Cherokee Indians (EBCI) and the Mainspring Conservation Trust to develop East Franklin as part of the Nikwasi Initiative.

The vice mayor said the race has yet to heat up, and she hopes it will be amicable. Asked if she thinks she has the votes to unseat Scott she said, “Oh, of course.”

A potentially devastating fire July 21 at the Highlands Playhouse underscored the importance of investing in local firefighting capabilities by the towns and county.

Taylor thanked the county for approving a fire tax increase to three cents for homeowners in order to build a new facility in coming years. Using his own $600,000 property as an example, he said his increased fire tax bill from 2018 to 2019 was $80 to $180.

“We had a real low fire tax,” he said in welcoming the increase. Highlands remains below the county average of 5.45 cents.

On Wednesday, Franklin Fire Chief Matt Breedlove planned to finalize a deal to purchase a 1997 Ford F-800 fire pumper from Cashiers, filling a lack in capacity that has been a glaring hole at the department for several years.

At the nudging of the Town of Franklin, Chief Breedlove negotiated with Jackson County to secure the 1,250-gallon per minute fire pumper for $58,000.

After commending the county’s move to renovate the Highlands Performing Arts Center and recycling centers across the county, Commissioner Tate reflected on school investments over the past fiscal year.

The board chairman said renovations worth more than $10 million are in the planning stages for Macon Middle School, with requests for proposals to be announced in the coming weeks.

A Greenway connection at the new town bridge, beefed-up courthouse security and a new dog park, which will break ground this week, were also noted.

The county plans to complete its Space Needs Analysis in the coming months, which will help officials to prioritize major infrastructure investments over the next decade.

The only community member in attendance at the meeting was Lowell Monteith, 32, who owns and operates “The Father’s House,” a group home on Lake Emory Road they uses Christian values to assist recovering drug and alcohol addicts.

Monteith saw a newspaper notice about the meeting and considered it a good opportunity to get face time with local representatives.

“I like to keep my face in [public], so people don’t forget who I am,” said Monteith. A construction project manager by trade, Monteith said he is currently helping 31 people, including families and children, to cope with addiction recovery and to avoid homelessness. “I stay full. Every bed is full, and I can’t accept more because my septic system was designed for an 18-bedroom apartment building.”

Monteith moved from representative to representative describing how the county’s sewer line runs right through his property, but he is forbidden from connecting to it.

“Just allow us to use a service that is already right there,” said Monteith, who noted he does not ask for or receive public funding to help struggling local residents’ lives.

A inquiry to town manager Summer Woodard as to the estimated cost of the steak dinner to taxpayers went unanswered as of press time. Council members for the towns of Highlands and Franklin receive an estimated $3,600 per year in compensation, while Macon County commissioners earn about $8,000 per year for their work on behalf of the public.

Town moves toward transferring ownership of Mound to nonprofit