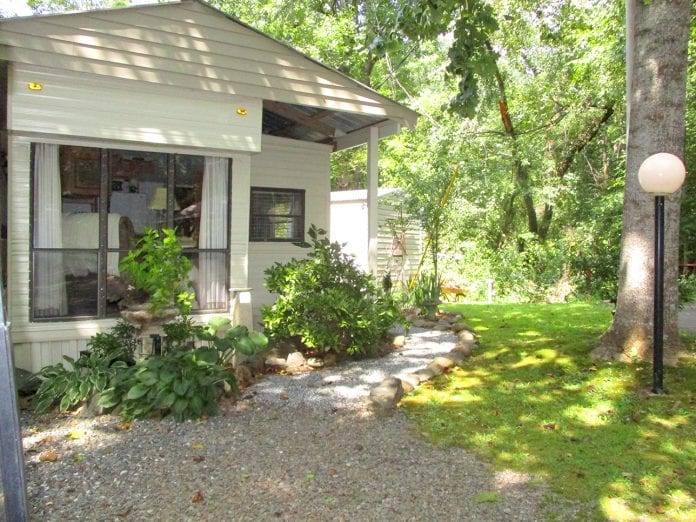 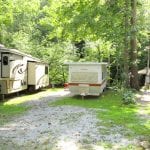 If nature had its way, Old Corundum Millsite Campground (OCMC) would not be standing today. Proving only the strong survive, the site has been ravaged by flood waters, tornadoes and other forces of inclement weather visible by exposed gnarly roots and sediment erosion along the Cullasaja River. It is nestled in the Cullasaja community five and one-half miles from Franklin on Highway 64 East. The campground is open from April 1 until Oct. 31 each year and is still one of the best-kept local secrets. That may change with its commemorative 50th year anniversary celebration scheduled for Sept. 1 at 4 p.m.

Pat Murray, manager of OCMC, says it is a phenomenal feat for any business to thrive for half a century, but particularly a campground.

There aren’t a lot of businesses, large or small, that have been around for 50 years,” said Murray. “There are probably more in this part of the world. It’s not an everyday occurrence – and a 50-year company that’s been in the same family in its entirety, I think is even more of an exception.”

Mac Stanfield, 80-years-young, says it never crossed his mind that the campground, located about a mile from the Corundum mine, would be shut down. When his father, David Stanfield, acquired the property in 1968, it was nothing but a wooded thicket. It was a family piece of property located on two sides of the river.

“Daddy and his brother drew straws to see who got what, [from granddaddy]” said Stanfield. “They sold and divided it up, and this is what I [eventually] got when I took it over in 1972.

“I love to be around people. I would have never thought the campground would have been what it is. My dad started this thing. He had a coal business selling coal, and he saw all the campers at the rest areas and in the bathhouses.”

“When the campground opened in ’68, there was no running water or  electricity, but it did have a bathhouse,” said Murray. “If you needed water at your campsite, you transported it from the bathhouse. The first clients were two ladies who stayed in tents and paid $4 a night for the privilege of pitching their tent and staying in the park. It evolved from literally primitive tent-site style camping to basically what it is today. We have 86 sites, and they have full electric, water, septic sewer line, Internet, Wi-Fi, and cable T.V.”

“My mother, when they first started the campground, she would stand over at the bathhouse with a broom and clean it all the time,” said Stanfield. “They used to joke about her standing over there with the broom, and they were afraid to make a mess.”

A special place with

“I’ve been affiliated with this campground since 1986,” said Murray. “My wife Donna came here as a teenager with her parents or grandparents and finally got me to come. We ended up buying a camper while we were working, and paid a seasonal fee and just came to it when we could get to it. We were in Ocala, Fla., in those days.”

A permanent resident now, Murray recalls times when the family came  during cooler months and enjoyed the fire in “City Hall” where everyone sat around spinning their tales. It’s a place where everybody knows everybody and of the 86 sites, probably 60 are seasonal residents. The unofficial mayor is a 90-year old who still drives and insists on his independence. The relationship building, and the graciousness of Mac and Pat are some of the continued draws as well as the sense of comfort and safety, the reputation and the atmosphere.

The people here are special,” said Rene St. Pierre from Cape Coral, Fla., who’s been coming with his family for close to 40 years. “The key is being a good hostess and being good to people. Mac and Pat will do anything for you. It’s been that way since I met Mac.”

Kids love to tube down the Cullasaja River. One family comes and stays a week to check out the kayaking sites in the area. Others come and sit down to mine gemstones all day or fish in the river.

“We haven’t had anyone panning for gold lately, but you never know when the mother load may come,” joked Murray.

OCMC has a Fourth of July celebration. A group of firefighters, who are regular campers from the Orlando area, stage the fireworks and help with the show and the barbeque each year. One of the firefighters works in China but comes each year.

In the states, people come to OCMC from as far as Missouri. Demographics vary too, but whether in tents, small campers or super-sized RVs, they are all treated the same.

The mine is no longer operational, because Corundum that was used as an abrasive for motor casting and other uses was replaced with synthetic materials. When it was mined, it was hauled at $200 a ton to a Dillsboro grinding mill by horse and wagon. One of the old barns from Corundum Hill had a big stone with 1890 etched on it that found a new home in Stanfield’s fireplace.

Other relics haven’t been as fortunate. Old church pews used as seating in “City Hall” floated down the river during an earlier flood and mudslide and a tornado in the 1990s ravaged trees and left campers powerless for days.

Through it all, including the loss of Stanfield’s wife Geneva in April, he’s stood strong. The late Mrs. Stanfield knew the business and she had a way to connect with the people.

Neither Stanfield nor Murray knows what the next 50 years will hold. Murray says he tries to think out-of-the box every day, and Stanfield will continue to put money back into the business and change something every year. OCMC is thriving with this team and Stanfield’s other acknowledgement.

“I have to credit the Lord. Because if it hadn’t been for His guidance and His help, we’d probably never got this far.”