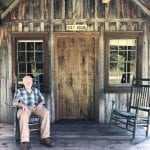 Before Hot Spot and Big Lots and Walmart, Macon County’s rural roads were dotted with one-room mercantile stores. Instead of leaving the old general store on his son Ned and daughter-in-law Maria Braud’s property, which adjoins his own on Tessentee Road, Ed Haight restored it. Doing so compelled him to inquire of its history and led him to learn about another family-run store a mile down the road. And instead of being a rabbit trail that led him nowhere, he discovered from a neighbor that a nonagenarian could recall a treasure trove of historical details about not only his store and her family’s, but about other significant events affecting the Tessentee community during her 94-year life span.

“I remember when I saw the first car drive up Tessentee,” said Catherine Taylor, who now resides in Highlands but was born and raised on her family’s farm on Tessentee Creek. “All we’d ever seen on the road, which was dirt then, was wagons pulled by mules, horses, or oxen.

Taylor’s father, Claude Patterson, built his store around 1930 at the roadside of his farm. It was called Patterson Store. The other nearest store, the one Haight restored recently, was owned by Tim Ramey, “so it was called the Ramey Store,” said Taylor. “The stores were just known by their family’s names.”

Both stores, within walking distance of one another – and the only stores “until you got to Otto, where there were four other stores” – stocked the basics: flour, sugar, coffee, salt, soap, etc. Items were purchased in bulk and they were weighed out on a scale and bagged. Flour sacks, when empty, were made into dresses, hand towels, underwear, and slips.

“Our store had a few bolts of fabric sometimes, and we had stick candy and later on we had Babe Ruths and Milky Ways as the first chocolate. We didn’t have any way to keep things cold, so we didn’t have any milk or sodas. Besides, most everyone had their own cows for milking. And we had eggs, but mostly because some people traded in eggs. That’s the only item my parents allowed for trade.”

Taylor said the Ramey Store carried a variety of crackers, where her family store did not. “And he had more candy for sale than we did.”

Both of Taylor’s parents ran the store, but her mother, Edna, did most of the work since her father was on the farm or involved with the local farmer’s federation. Taylor and siblings also worked both the store and the farm.

She remembered that the Rameys, Tim and Molly, built their home and then built the store next to it. All stores had a porch where customers could “sit a spell” and discuss news, crops, family activities, and more.

“And on Saturday evenings, neighbors would gather and catch up. Sometimes someone would bring an instrument … a banjo, fiddle, harmonica. One of my favorite songs was ‘Tom Cat’s Kitten.’ Sometimes people would travel over, like the Henry Brothers would come from Clear Creek to play, and a blind man, Mr. Lamb, came over from Dillard area to make music; then he would spend the night with us.”

She added, “We also had quiltins’, and cannins’, and pea shellin’, and corn shuckin’. We knew everyone in Tessentee and they knew us. I can still name every one of the families who lived on Tessentee Road from Georgia Road to the end of Tessentee. A lot of those families were ancestors of the original settlers to that area. And some of those families are still there.”

The rural country stores also had hitching posts for horses and mules. But none had telephones. Taylor, though, remembers the first telephone on Tessentee was installed by the Forest Service to report fires and was made available for anyone to use.

“And there was no electricity out there on Tessentee until I was 23 years old and married. Daddy went to work for the Rural Electrical Cooperative and helped get the right away for electricity.”

Claude Patterson, who lived to see 97-and-a-half years, eventually closed the family store in the 1950s and went to work full-time for the cooperative in Highlands, although he kept the farm on Tessentee and Taylor still owns some of the property. 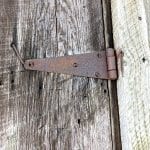 Haight said it was important for him to take the Ramey Store back to as close to its original state as possible. “I suppose it’s at least partly because of my interest in old or historical buildings and their construction methods.  In my former professional life, I often consulted on old buildings.  Also, I have a vested interest in the scenery and views in the Tessentee valley, and I wanted to enhance the rural look as much as I could.”

Haight purchased his creek-front property on Tessentee Road in 2000. Earlier this year he decided to tackle the store restoration.

“When my son Ned and his wife Maria bought the property at the end of 2012, the old store building no longer had its original look. The windows and door on the front had been removed and were replaced with a closed front.  The front porch and its roof had long since been destroyed.  Tommy Keener, my neighbor across the road, told me that when he was in 2nd grade (around 1961) a big storm came through and blew off the porch and its roof.  It was never replaced, which was a loss for Tommy and his classmates since they often stood on the porch to wait for the school bus in bad weather. The interior had been covered with modern drywall and the inside was being used for storage.”

According to Taylor, the rural mercantile stores were not decorated, but plain and utilitarian. “We didn’t even decorate for Christmas until we learned to use the tinfoil from chewing gum wrappers to make ornaments. And then we would just decorate our house, not the store, with those homemade ornaments and also strung popcorn and paper chains. But the stores were just simple inside.” 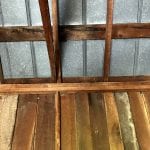 Haight said a 1960s snapshot found of the Ramey Store showed the original windows and doors, but not the former porch and its roof.  “This gave me the starting point for the size and style of the windows and doors, but I had no clue as to the configuration of the roof.  I looked at several old store buildings in North Carolina and North Georgia in order to decide on the look of the front porch, and that was how I came up with what I built.  I was able to salvage a pair of 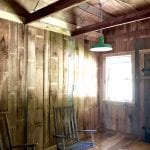 old windows that were exactly the size and style of the originals, but I had to build the front door.  On the inside, I rebuilt the floor with weathered rough sawn poplar lumber sawed at a mill in Macon County.  I removed all the drywall from the walls and ceilings, raised the ceiling about two feet to give a larger feeling inside, installed some electrical and antique lighting, and replaced the wall coverings and ceilings with locally sawn weathered poplar.  The door and window hardware is salvaged from antique buildings.  I salvaged the material for the front porch from an old building with the same style and amount of rust as on the existing part of the store so as to match.”

Tim Ramey closed his store about 10 years before Taylor’s family store closed. Commercialization was increasing in Macon County and the automobile’s popularity meant that Tessentee neighbors did not have to rely on stores in close proximity to their homes.

Taylor’s family store no longer exists, but the renovated Ramey Store has attracted much attention from both seasonal and full-time residents living on Tessentee Road. Haight and his son and daughter-in-law, as well as visiting family members and friends, occasionally sit on the porch and wave to passersby.

“People will stop and ask about the store, but so far none that have stopped remember the original building,” said Haight. Taylor, though, said she will never forget the simpler era when the Patterson and Ramey stores existed as part of the lifeblood of the Tessentee community.