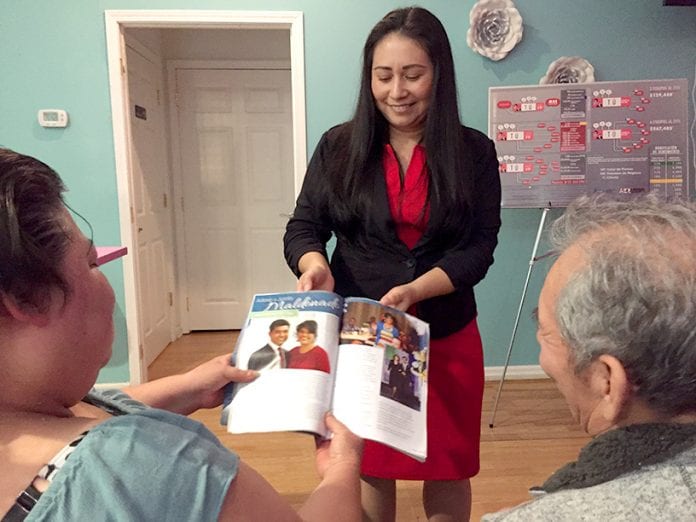 Geralda, 55, sat in the front row of a makeshift gallery at Anny’s Ice Cream shop in Franklin Thursday night. Ice cream wasn’t being served. It was cold outside and all the other businesses in the strip mall had long since turned out their lights. But the doorway to the ice cream shop was bustling with event organizers – all Hispanic men and women dressed in suits. Geralda patiently sat inside, holding the arm of her 74-year-old husband, Candido, waiting for the special guests to arrive.

A presentation about an “opportunity” was due to start at 7 o’clock, but an “Emerald-level” couple who had really made it big were still driving in from Atlanta. Finally, they arrived to rousing applause and shouts led by the group of people in suits standing in the back. The first couple, Felix and Sara, walked down the shop’s center aisle to face the crowd.

“We all came here with a dream,” said Sara in Spanish, addressing the assembled Hispanic crowd of assorted ages. Some retirement-aged Hispanics sat in the front rows. At a table sat a woman in her 30s next to a middle-school-aged girl doing her homework.

Sara began to ask how long each person had been in the United States.

“Nineteen years,” Geralda answered. “My dream was to come here, work for seven years and return, but we weren’t able to return.”

Geralda spoke of her husband’s cancer and the struggle to make ends meet as low wage earners.

“Some of us don’t have papers,” Sara said. “And we cannot expect Social Security and health care in retirement. We need to keep working.”

In a neat red dress and black jacket, Sara began going through a series of slick slides explaining how with MDE Latino, you can embrace “Plan B.”

This was an opportunity, she stressed, $185 to become a partner and receive of box of Amway sample products, $65 for the catalog and $70 for “Seis para el éxcito,” (Six for Success), a six CD set – with separate guidance for men and women – to learn the secrets of success. This was “the key,” she said, shaking the shiny cellophane box in her hand.

“How long before you think you can start your own business?” Sara asked the group, then addressed Geralda directly.

“About a week,” she responded meekly. “To get the money.”

A Dream to Return to Mexico

Like many Hispanics in Macon County, Geralda and Candido moved to Franklin with their daughter from Mexico in the ‘90s construction boom years. They worked and paid into Social Security, but without a number of their own, they cannot expect to receive any Social Security in retirement, and they are not eligible for Medicare.

They make up what is known as a “mixed status family,” said Pisgah Legal Services immigration attorney Shoshana Fried by phone from Asheville. The nonprofit law firm makes regular visits to immigrant communities across western North Carolina, including Highlands, to offer services like “emergency preparedness clinics.” In the clinics, volunteer attorneys help immigrant families fill out power of attorney documents in the event they are detained or deported, and their American-citizen children are left behind.

Fried said that Pisgah provides its services to clients free of charge. The organization is funded by federal and state grants and private donations.

Geralda’s daughter was 12 when she accompanied her parents on the two-week journey to the United States from Vera Cruz, a coastal city on the Gulf of Mexico. She would be considered a “DREAMer,” one of the young people brought to the United States with their parents who was raised and educated in this country. “DREAM” is an acronym for Development, Relief, and Education for Alien Minors Act, which has yet to pass Congress since it was first introduced in 2001. Through her daughter, Geralda has an eight-year-old grandson, who is an American citizen.

All three spent a week or more in the hospital with broken ribs and punctured lungs. Geralda’s daughter had headaches for months after, but eventually recovered and graduated high school. Geralda and Candido had insurance through their jobs in Highlands, but the recovery was long and there were still bills to pay.

Candido did not find it easy to return to a hard labor job, but he did. Then there was a misdiagnosis of glaucoma. Surgery saved his left eye, but not its vision. By then, he could no longer work and lost his insurance. Then came the cancer.

“We had about 500,000 pesos from working saved in an account in Mexico to open a business,” Geralda explained. The money was needed for a down payment on radiation treatment and medication that cost a thousand dollars or more. The dream of returning to Mexico hung in the balance. “The money that was transferred back to the U.S. was about $16,000. It wasn’t enough.”

Candido recovered and is now cancer free, but he lost 43 pounds and has been unable to work since 2015. He and Geralda now live with their adult daughter, her husband and child.

There’s not much NGOs [non-government organizations] can do to help elderly Hispanics like Geralda and Candido who do not have legal status in the United States as they reach retirement age.

“They just continue to work, basically,” said Andrea Smith, director of services for the International Friendship Center, a Highlands NGO that helps many Franklin-area Hispanics. The NGO does pro bono translation work, has a food pantry and helps immigrants apply for charity care, the process for requesting that a hospital evaluate waiving fees or reducing bills when the patient cannot pay.

“They are now relying on their kids for help,” she said of the many Hispanics in the community reaching retirement.

Fried said depending on factors like someone’s immigration history, when they arrived, their country of origin, how many years they have been in the country and which family members might be American citizens, there is a possibility that they may petition for legal residency.

“Usually, the answer is ‘No,’” she said. Often, illegally       crossing the border can disqualify them. “Even having an adult U.S. citizen child doesn’t necessarily give you a path to have lawful status.”

For those few elderly Hispanics who can eventually legalize their status, a Social Security number does not allow them to recoup all the prior years’ earnings before they had legal status and permission to work in the country. And Medicare has a waiting period of five years once someone has a green card, or legal residency.

“A lot of people are paying into Social Security, but without a valid number, they’re not going to collect,” she said, adding that some social security numbers used by immigrants are purely fictitious, belonging to no one. “That is something that is becoming a problem as a lot of immigrants who have been in this community have been here a long time.”

Go back to Mexico?

Geralda was hesitant when Candido first encouraged her to migrate to the United States.

“I said, ‘I don’t want to go because it’s not just me, I also have my daughter and it will be difficult for her,’” she remembers.

She worried about crossing the border, how her daughter would adjust to a new country, a different language. And while her husband could easily get a job, where would she work?

It took two phone calls with her brother-in-law in Franklin to convince Geralda that the journey was hard, but possible, and that her daughter would assimilate quickly and have a better education in the U.S. She, too, would find a job.

“So, we decided to come,” Geralda said. But after a month in Franklin, while Candido quickly got a maintenance job with his brother in Highlands, Geralda could not find work. Eventually, she joined him in what she considered a “man’s job,” a job which she has now held for 19 years, affording her a stable income and health insurance for herself.

The Friendship Center’s Smith, who is an American citizen of Colombian origin, said she asks many of her clients, “Why?”

“I’ve asked them, ‘Why are you here? Why are you struggling?’ Why would you come to a foreign place where you don’t even speak the language and struggle,” she said. “They say that the wages in Mexico are very low. They say that for a day’s work maybe you’ll get paid two dollars.”

Often, having spent most of their working lives in the United States, immigrants have no pension to return to in their country of origin and the disparity in health care is wide.

“In reality, we don’t have any money there,” said Geralda, who says she is unemployable in Mexico at her age. “Here, I still have a job and a paycheck and medical insurance. If I return to Mexico, I have nothing.”

Besides, Candido’s doctors are here in western North Carolina, as is her grandson.

The Emerald couple had arrived from Atlanta to raucous cheers. Alberta Chavez, 68, walked to the back of the room to face the crowd. Her husband, Emeterio Chavez, 72, followed on crutches with his knee bent and his foot in a walking cast.

“With the opportunity, you can make a good retirement in this country,” said Alberta Chavez in a phone interview after the presentation. “We have made a good living.”

“MDE Latino cannot guarantee success, what it guarantees is a learning environment so that you can succeed,” she explained.

When pressed, Alberta Chavez said there are likely more than 100 Franklin families who are MDE Latino associates, but none are Emerald-level. The couple has traveled to Franklin on marketing trips more than a dozen times in the last five years.

“I don’t have exact figures because they are constantly signing up,” she said.

Geralda is still considering the opportunity. She doesn’t want to be a burden on her daughter’s family. That’s why she still works and contributes what she can.

“It’s good to know other people in old age are still working,” she said of Emeterio and Alberta. “It is a possibility, and a way of earning something to not have so many problems in your old age.”

Fried said there is virtually no recourse for vulnerable people like Geralda.

“A lot of people find themselves in that situation,” she said. “Even when there is a mixed status family, often there is nothing that can be filed for them.”

As for what retiree-aged immigrants can do to protect themselves from opportunities that may not be fit for them, she said there is little.

“If something is done illegally, they can report it,” she said. “But if it is ill-advised or predatory, there’s really nothing to protect these people.”

Geralda works hard, but she is happy because her family is close.

“They are well, but we don’t want to be a burden for them,” she said. “That’s why I work, I struggle, and I try to overcome the situation. But it is not easy.”