I grew up in the southwestern part of Ohio. Briefly we lived in my grandmother’s small guesthouse on the banks of the Stillwater River outside Dayton. We called the place “out in the country” because it was in fact very rural. Everything about that place impressed me as a young kid and it still lingers. It influenced me so profoundly that when I started to look for a place of my own after finishing school, I wanted a comparable locale. I came very close to finding it in Kennesaw, Ga. 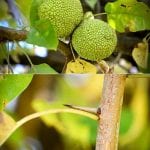 Alongside the parking area in front of our house “out in the country” was an Osage-orange tree. It provided shade all summer but, in the fall, it produced large orange to grapefruit size fruits heavy enough to dent fenders or even crack windshields.

My next contact with Osage-orange was a gift made of its wood formed into a potter trimming tool. I was throwing pots on a potter’s wheel at that time. I was told that wood was chosen because it was extremely hard and would not wear down trimming even the coarsest clay.

Just recently we stopped outside Young Harris to purchase some Hughes Sorghum Syrup. There on the corner of the road was an Osage-orange tree with dozens of fruits. I had not seen one in years. I remembered we called it hedgeapple or horse-apple. I have since done some reading about its very interesting history. Originally it was found only in Texas, Oklahoma and Arkansas. But it is hardy in every state in the union except maybe Alaska. Osage-orange was the first plant specimen sent back to Thomas Jefferson by the Lewis and Clarke Expedition. It had been given the common name of bois d’arc, Bodark or bow-wood by the French. Its scientific name is Maclura pomifera (ma-klu-ra pomif-er-a) in honor of William Maclure the “father of American geology.” Sometimes plant names make little sense or are barely logical.

Osage-orange was the principal tree used in FDR’s Shelterbelt WPA project in the 1930s. In the Great Depression windbreaks were planted in the plain states to modify wind patterns and prevent soil erosion. By 1942, 30,233 windbreaks were planted containing 220 million trees that stretched for an estimated 18,600 miles. (Wikipedia report) One author states that more Osage-orange trees have been planted than any other tree in North America.  It was used to create a living fence and windbreak, described as “horse high, bull strong and hog tight.” Its fast growth habit made this tree useful. It is happy in any soil, the branches with thorns twist and turn intertwining forming a dense tangle, a hobble. It has the most decay resistant wood in North America. Termites do not even bother it. Osage-orange was used for fencing before there was barbed wire. If used for fence posts the wood lasts longer than barbed wire. Also, early pioneers used the wood for tool handles, wheel rims, posts and bows. Its yellow wood has ornamental value.  Planting hedge rows was a practice brought to the U.S. by European immigrants. Back then you could buy Osage rooted cuttings or seedlings by the bushel for 5 cents each.

The four- to six-inch fruit is unique in that it is a compound mass of seeds. Although the fruit is solid and heavy, it floats. Most native fruiting trees have various animals that feed on the fruit. Not so with Osage, rarely will even a squirrel feed on its seeds. Perhaps some large prehistoric animal used it for food like the giant land sloth? This may explain why it has such a limited natural range. The seeds are not dispersed by wind or rarely by animals. The tree is propagated by just about any method, most easily by seeds. It is almost totally free from insect damage.

Why do we not see more of them and never for sale in a nursery? It is not particularly pretty and its fruits are a serious problem, described as teenage ammunition. Dirr states that it is “not worth recommending for the residential landscape.” There are fruitless and thorn-less varieties. Male trees will produce fruits without seeds. It grows to 40-60 feet with a rounded over all shape. The mature tree photographed by Karen Lawrence (above) has been limbed up so that a lawn mower can get under it.

The National Champion (largest in the U.S.) Osage-orange is at Red Hill, the historic Virginia home of Patrick Henry.  It is believed to be between 200-350 years old and is 65 feet tall and 85 feet wide.  Reportedly it came from a cutting sent to Patrick Henry by Lewis and Clarke.

There is a myth that says that the fruit repels spiders. People used to put the fruit around the foundation of houses to keep spiders from getting into the house. However, new evidence disproves this superstition.

So, for me this tree has sentimental value, brings back a flood of memories, has historical interest and uncommon curious fruit.