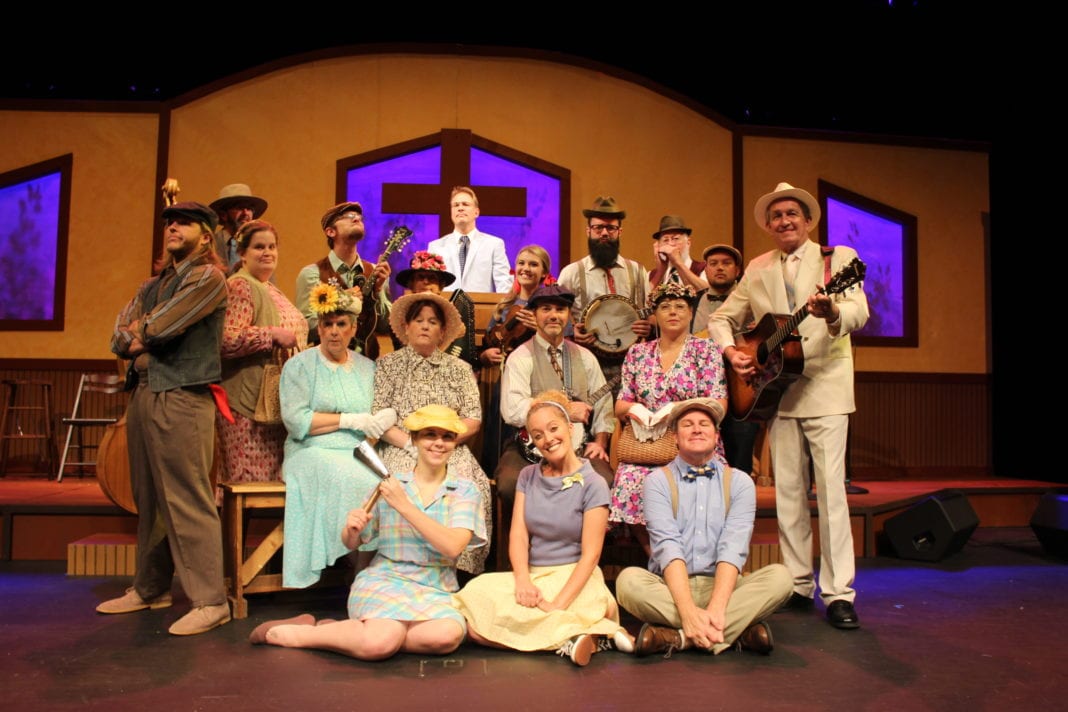 Set in the 1930s, “Smoke on the Mountain” is a musical tale that introduces the singing Sanders family, who perform their traditional and bluegrass gospel songs for the members of the Mount Pleasant Baptist Church in celebration of their new electric light bulb.

A crowd favorite, this isn’t the first time the Overlook Theatre Company has brought “Smoke on the Mountain” to the stage, but will actually mark the fourth time the theatre company has done the play, the first one staging in 2004. The production is and  Off-Broadway musical that was written by Connie Ray and conceived by Alan Bailey. It was originally workshopped at the McCarter Theatre in 1988, given a full staging at the McCarter in 1990, and was subsequently moved from the McCarter to Lamb’s Theatre in New York City in 1990, logging 475 performances. The Lamb’s Theatre revived it in 1998. The name of the musical comes from Psalm 104:32: “He who looks at the earth, and it trembles, who touches the mountains, and they smoke.” (Psalm 104:32). “Smoke on the Mountain” is one of the most produced shows worldwide.

“The music is all the songs that a lot of us grew up with in church,” said Scotty Corbin, director for the Overlook Theatre Company. “So many of the old traditional favorites such as ‘I’ll Fly Away,’ ‘Church In the Wildwood,’ and ‘No Tears In Heaven’ are included as well as a few surprises.  We don’t often repeat productions, but the audience loves this show so much and the characters are so wonderfully written, you can’t help but want to visit this story over and over.”

Consisting of almost 30 gospel tunes and the rich stories of the Sanders family’s history on the gospel circuit, “Smoke on the Mountain” is full of laughs and toe-tapping bluegrass as the characters and the audience realize with a little bit of faith and a whole lot of heart, anything is possible. A full two-act theatrical presentation, something new in this year’s production, is that it features Mountain Faith as the Sanders Family Band. In the past, Corbin said they created a band especially for the performances, but this year, Mountain Faith was the perfect fit.

“Mountain Faith plays the part of the Sanders Family Band,” said Corbin. “We work with them often at the theatre and when we were first talking about bringing this show back, I thought how fun would it be to ask them to join us. They have been a wonderful addition to the cast.”

There are 15 cast members on stage either as actors or part of the band, and a crew of five that brings the musical to life for the audience.

“Most of the cast had done this show previously, so other than a few minor changes, most everyone was familiar with their parts and how the show would run,” said Corbin. “We only rehearsed for two weeks.”

The show is interactive and involves the audience to make the laughs flow. “The audience plays such an important part for this show,” said Corbin. “Besides this wonderful cast, the interaction with the audience is the most fun.”

Corbin said one of the highlights of this year’s production is the support of the show’s co-writer, Alan Bailey.

“A few weeks ago, we also received a call from Alan Bailey, the co-writer of ‘Smoke On the Mountain’ wishing us well and telling us a bit of the back story in the creation of the show,” said Corbin. “He said many of the characters are based on real people he and his co-creator, Connie Ray knew while growing up in the mountains of North Carolina, so it was great to hear his insight.”

The Overlook Theatre Company has already performed the show twice at the Smoky Mountain Center for the Performing Arts with four shows remaining. Upcoming shows are Thursday, Oct. 12, Saturday Oct. 14, Oct. 19, and Oct. 21, all of which begin at 7:30 p.m. Tickets are $17 for adults and $12 for students. For more information, call (866)273-4615.