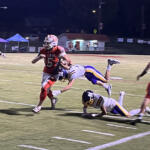 queen was announced and the Panthers routed North Henderson, 35-3. The FHS Homecoming Committee chose a queen and runner-up from a court made up of 14 nominees. Senior Taylor Moss garnered Maid of Honor (2nd place) while Senior Tori Ensley was named Homecoming Queen for 2022. Prior to the crowning, each Homecoming Court member was driven around the football field track in a convertible to the cheers of football fans and family members and then escorted to the 50-yard line for photographs.

As for the Oct. 7 football game, the Panthers led the Knights from start to finish to go 3-1 in conference play and 5-2 overall. Junior Chance Pitts (#20) was named Player of the Game. From his inside linebacker position, Pitts had four tackles, some for crucial yardage losses, that helped solidify the dominating performance. Junior Beau Paulson (#16) also had a strong offensive game, including an option pass to Ashton Shope (#2) for a touchdown (TD) to close out the first half scoring for a 21-0 lead. Place kicker Daniel Riddle was once again accurate and productive, making all five points after touchdown. Franklin was very balanced overall on offense with 184 yards on the ground and 180 through the air. Quarterback Davis Anders (#12) had one of his best games thus far in the season, going 12/13 for 160 yards with one touchdown and one interception. Running back Ty Handley (#15) again delivered with two TDs, one rushing and one receiving.

Head Coach Josh Brooks is taking a predictably wise and cautious approach regarding the next phase of the season. Brooks commented that the last two weeks have been “two good wins for us – one turnover and limited penalties, very efficient throwing the ball … [we are] playing for a share or at worst, a second place conference finish with two wins.” He went on to add that while both upcoming games will be critical to overall conference success, “Smoky [Mountain] is very balanced, very physical … Smoky is our only focus at this point — glad to be playing in the middle of October with a lot to play for.”

A crucial stage of the season is upcoming, including two games against schools with winning records: at Smoky Mountain (4-3, 2-1 in conference) Oct. 14, and then home versus West Henderson on Oct. 21. The Falcons are 7-0 overall, 4-0 in 3A West Conference 54.

Feeding the firefighters takes a village