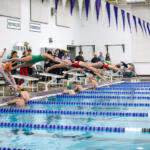 Three of the four Franklin High School (FHS) basketball squads boast winning records as of mid-December. FHS began its regular season Nov. 29 after numerous scrimmages for both junior varsity and varsity women’s and men’s teams. On Dec. 16 they hosted Pisgah for the  eighth of 20 regular season games, plus a New Year’s weekend tournament. The games against the Bears were tough with only the men’s varsity team coming out on top, in a hard-fought 77-71 win. Prior to the game against North Henderson on Dec. 20, the current cumulative record stands at 21-9; 6-1 in the 3A Conference 54. Men’s varsity, coached by Doug Plemmons and Jay Brooks, lead the way at 8-1 overall followed by the junior varsity (JV) women who hold a 6-1 record and are coached by Bekah and Josh Brooks. Next come the JV men who stand at 5-2, coached by Tres Rogers and Ryan Raby. Last, but not least, the varsity women’s team is 3-5 and guided by Scott Hartbarger and Justin Moffitt.

In terms of per game statistics for the varsity teams, senior Tori Ensley leads women’s scoring in both points and steals (13.9 and 2 respectively). Junior Avery Moffitt is first in shooting percentage at 45% with sophomore Cali Queen leading in assists at 2.5, and junior Breonna Carver averaging almost one block in each game she has played. The team leader in rebounds is senior Roslynn McCollum (6).

With plenty of regular season and then conference – and potentially state playoffs remaining, coaches are generally happy with what they have seen from the teams so far this year. Men’s varsity Coach Plemmons offers some reasons for his boys’ success.

“While individual stats are important … they practice and play extremely hard, defensively they are holding opponents under 50 points per game on average, and lastly, this team is very unselfish … they don’t seem to care who receives credit as long as the outcome of the game is on our favor.”

Similarly, Hartbarger lauded the effort his varsity women have demonstrated.

“They battled both Cherokee and Rabun County, who are both leading their conferences. I am proud of the girls’ effort and steps they are taking; we fought hard against Pisgah and are getting better every game. We have had a string of tough games and playing good teams also.”

Next up for Panther basketball is the Towns County Christmas Tournament Dec. 28-30 with specific game times still to be determined.

Update: Franklin High School closed out its 2022 home basketball schedule Dec. 20, with the men’s varsity team winning a thrilling triple overtime win against North Henderson, 96-92. The hard fought victory ended an evening during which all four basketball squads prevailed over their Scarlet Knight opponents. The impressive win leaves the Panthers men first in conference play with North Henderson in third, and West Henderson in second. FHS’ next home game, Jan.10 is against the Falcons.

Dwain and Dina Picou led the FHS swim team to Buncombe County Dec. 16 for the second of three scheduled meets there – this one, a five-team contest at the TCR Invitational. Participating schools included TC Roberson, Asheville, West Henderson, and Smoky Mountain high schools. For the first time this season, the Panthers did not come away with first place – in either men’s or women’s rankings for a meet. Instead, host TC Roberson took first: 384 points for the women and 347 for the men. The Panthers logged a third-place finish for the women, with 251 points, just behind second place Asheville who finished a close second with 381 points.  For the men, FHS finished second with 222. Coaches Dwain and Dina Picou were happy with the overall results, nonetheless.

“TC Roberson and Asheville high schools are both 4A (as compared to FHS being 3A, which is one level lower/smaller school) and are two of the fastest teams in Asheville,” they said.  While a few swimmers were missing for different reasons, “we had a good number of our swimmers beat their best times and some of our relays had faster regional qualifying times.”

Some individual standouts include senior Clayton Guynn taking first place in both the boys 50- and 100-yard freestyle races, (out of 18 and 9 contenders respectively) and Jose Gomez (junior) coming in third for the boys 100 yard butterfly. On the women’s side, junior Logan Guynn finished third in the girl’s 100 yard breaststroke while Natalie Ballard, also a junior, finished second in both the girl’s 50- and 500-yard freestyle events. Sophomore Zoi Walker came in second for the girls 200 yard individual medley event, which includes butterfly, backstroke, breaststroke, and freestyle swims. In the girls 200 yard freestyle relay, the team of Walker, Kate Phillips, Callie Roper, and Rylee Cassada took first place for the Panthers. Cassada, Phillips, Guynn and Ballard also brought home third place in the girls 400 yard freestyle relay.

The next scheduled meet for FHS swimmers is Friday, Jan. 13, 2023. It will again be held at Buncombe County Schools and will consist of six schools competing.

In wrestling, the Panthers recently competed in the Great Smoky Mountain Grapple, held at Harrah’s Cherokee Center, Asheville Dec. 16 and 17. The meet included 34 men’s and 23 women’s teams from North Carolina, Georgia and South Carolina high schools. On the heels of the recent quad meet here in Franklin, Head Coach Coley Tyler was accentuating the positive. “We cut down on the number of losses by pin on Tuesday (Dec. 13 FHS-hosted meet), which was great to see after all the work and emphasis we have put on that in practice. We did better against every team the second time around, which is a testament to growth and improvement.” “We had six of our nine wrestlers make it to day two on Saturday [at Asheville]. The Panthers’ Abby Carpenter (girls 126-lb. weight class), was again a standout on the team with a first-place finish where she scored 24 team points. Carpenter won three matches, all by falls, over North Henderson (quarterfinal), Rosman (semifinal), and Mitchell (final). FHS rolls into the Christmas break with three more matches this week; one at North Henderson, Dec. 20, and two at Swain Dec. 22 (individual tournament) and Dec. 23 (duals tournament).

South Macon has 99 problems and space is every single one...