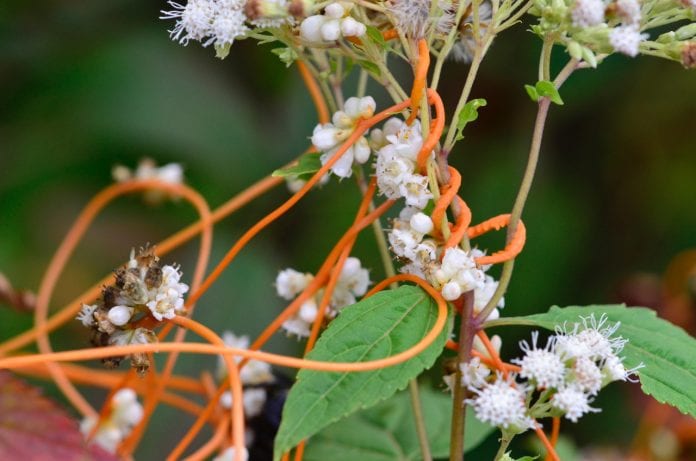 One percent of all plants in the world are parasitic.   Overall there are two types of parasites – holoparasites and hemiparasites.  This is easy to remember as holo mean whole, thus these plants depend entirely on other plants for their survival.  Hemi means half so hemiparasitic plants can produce a portion of their own nutrition so are not totally dependent on a host.    There are many other types of parasite terms such as ectoparasites that live on the outside of its host.  There are epiphytes that depend on another structure only for support.  Epi means upon and phyte means plant. Orchids and bromeliads are examples.

One plant parasite that appeared uninvited in my perennial garden was dodder.   Most of my plants growing in this particular area came from mail order nursery sources so it was mistakenly imported.  Dodder is very visible so it had to arrive as seeds.  I recall it distinctly as I had no idea what it was at the time.

Plant parasites have many different forms but they all produce a special organ called a haustorium.  This term comes from Latin meaning to draw in.  This structure penetrates into the plants soft structures drawing out nutrients, water and minerals. 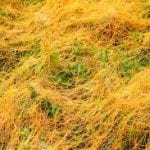 Dodder is an annual leaf-less parasitic vine in the Cuscuta family which has more than 50 species in the U.S. and Canada. It is related to morning glories.   It begins its life cycle as a seed which germinates like most seeds and produces roots.  However, its seedling cannot survive very long without a host.  There are a wide range of hosts.  Once the haustorium have penetrated a host, the roots die marking it holoparasitic, totally parasitic.    Eventually the vine blooms producing small flowers that can be white, yellow of pink.  This leads to seed production.    Host plants sapped of energy will eventually weaken and die.  The threadlike twining stems of dodder can be yellow or orange.

Plants have a signaling device of various sorts.  Warning chemicals can be produced when a plant is attacked by an insect for example.  Since dodder vine travels from one plant to another the vine itself has been shown to transmit distress signals to neighboring plants.  Thus, dodder can form a network of plant communication.

As interesting as dodders are it is not something you want in your garden. Control methods are many. Most importantly, manually discard the plant before it blooms and sets seeds.  Herbicides work and pre-emergent weed killers will prevent seed germination.

To get a good prospective on this parasite plant watch a brief  U-Tube Attack of the Parasitic Plant (Cuscuta).  What I could never figure out is why this plant is called dodder, meaning shaky until I watched the U-Tube.