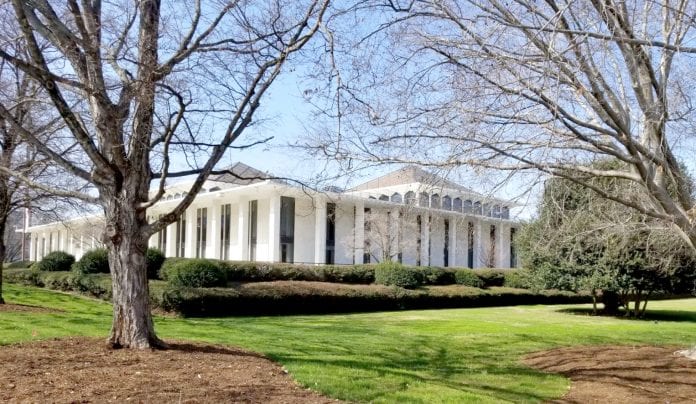 North Carolina Senate President Pro Tempore Phil Berger announced this week that the Senate will adjourn for the year on Oct. 31, with or without a state budget.

After a short break, all eyes were on the Senate this week as they reconvened in Raleigh. This week marks the first time Senate members have returned to session since the House of Representatives held a vote to override Gov. Roy Cooper’s budget veto on Sept. 11. It is the first opportunity the Senate has had to call their on vote on whether or not to override the budget veto and according to Berger, he isn’t certain it will happen this year.

Because the Senate is set to adjourn for the year at the end of the month, that leaves little time for Senate members to take up a vote on the budget. Berger did say that the Senate will not follow in the House’s footsteps by holding a surprise vote.

During a news conference on Tuesday Berger said that he would follow Senate rules which require at least a 24-hour notice to minority leader Senator Dan Blue regarding votes to be taken. With a 24-hour notice, Berger said it is then up to individual Senate members whether or not to be present for the vote.

“There should be no question that should the budget override vote come up, that every member of the Senate has been told publicly that they have a choice to make — be here and vote or not,” Berger said.

Berger also said that the Senate will first consider other, less controversial matters prior to any budget discussions. With other items garnering broad, bipartisan support, Berger said that there is no reason to delay taking care of those matters first to avoid holding them up due to the budget disagreements.

If a vote doesn’t occur by the end of the month, Berger said he may call the Senate back in December, but not until after the filing period ends for the 2020 election. Filing for the 2020 state election opens on Monday, Dec. 2, and ends at noon on Friday, Dec. 20, which would leave the very last week of the year as an option to potentially address the budget before moving into 2020. Berger said by waiting until after the filing period, it may alleviate some of the pressure Democrats feel to side with Gov. Cooper and other party members.

Real-time impact of not having a budget

One of the more pressing impacts of not having a state budget is within the Macon County Schools system (MCS). With the majority of the MCS budget coming from the state, it becomes increasingly difficult for school leaders to effectively and efficiently operate.

The state is three months into the fiscal year without a budget, and Macon County Schools just began their second month. School board members have produced their “best guess” estimate of a budget and have tried to plan for the school year, but without solid numbers from the state, it is difficult.

As it stands, Macon County Schools doesn’t even know how many teachers they will be able to retain for a school year that started in August.

“We are now almost six weeks into the school year,” said Macon County Schools Superintendent Dr. Chris Baldwin. “We are uncertain about the number of teaching positions that we will receive, but we have hired three teachers and an assistant to comply with the K-3 class size legislation. If we don’t receive these positions from the state they will be funded out of our fund balance. If we receive more than three and an assistant, we will need to disrupt classrooms or build fund balance.”

If the state decides to fund fewer teachers than the school system currently has, significant changes will occur. Not only could employees potentially lose their job, but classroom sizes might need to be increased to make adjustments for the decrease in personnel.

One of the most divisive issues within the budget is raises for teachers. While the governor’s budget calls for a significant increase, legislators have a different idea in mind. Funding for raises will come from the state for the majority of positions, but if the budget calls for teacher raises that impact teachers who are paid out of local funds, the school system will have to fund those raises with other funding sources, which simply do not exist.

Does the Senate have the votes to override

The budget that Gov. Cooper vetoed was originally passed in the Senate in a 33-15 vote in June. Of those 33 yay votes, four were from Democrats. The budget conference report also passed the Senate not once, but twice with bipartisan supermajorities.

Had all House members been present at the time of the override vote, the House would have needed all Republican votes and seven votes from Democrats for it to pass. In the Senate, only one Democratic vote is needed to meet the three-fifths supermajority required to override the Governor’s veto.

If the same four Democrats who voted for the budget in June — Sens. Floyd McKissick, Don Davis, Ben Clark and Toby Fitch — vote in favor of the override, then the Senate will have more than enough votes. Because of the backlash seen across the state after the House voted in what Democrats called a surprise ambush in September, Senate Democrats who originally voted for the budget may change their vote in solidarity with their party members.