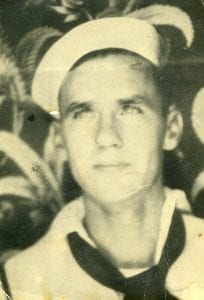 Jack Overly and his sister Jill O. Overly Lee were 10 and 8 years old respectively when their Uncle Frank joined the Navy and reported for duty aboard the USS Oklahoma on Oct. 12, 1940. The brother and sister duo fondly remember their uncle, Frank Wood, as a fun-loving man who loved a good prank. When Wood joined the Navy at 24 years old, it was a proud moment for their family, Jack remembers.

“I remember Uncle Frank sitting at my grandparents’ house chugging milk trying to gain weight just to be able to enlist,” said Jack. “He was a small man, and I think even after months of trying to put on the weight to meet the minimum requirements, he still had to get a weight waiver to even be able to enlist.”

Wood was born in Jackson, Ohio, on Nov. 16, 1916. According to Jack, Jackson, Ohio was — and still is — a small town that didn’t offer much for a young man to do in terms of work, so his Uncle Frank decided to enlist in the Navy to make a career out of it.

Two months after Wood’s one year anniversary aboard the USS Oklahoma, the ship was 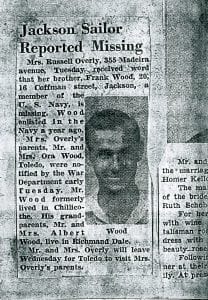 moored in Berth F-5 in Battleship Row in Pearl Harbor, Honolulu, Hawaii, when the attack on Pearl Harbor began. The first torpedo hit the ship shortly before 8 a.m. followed by multiple torpedos which caused the ship to quickly capsize and sustain 429 casualties.

After that, any hope of ever seeing their Uncle Jack again was lost with the war. Although just children, both Jill and Jack remember the day they learned their carefree, prankster uncle wouldn’t be coming home.

Now, 76 years later, Jack and Jill will finally be reunited with their uncle this weekend in Franklin, as his remains will be brought home for burial in Carson Cemetery. 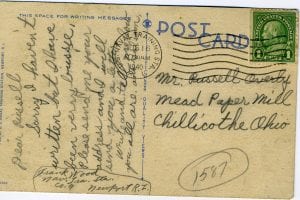 “It’s surreal,” said Michael Copp, son of Jill Overly Lee. “My mom is excited for the opportunity to lay her uncle to rest and to finally have closure she has lacked for the last 76 years.”

After the USS Oklahoma was torpedoed, Navy personnel began recovering remains of deceased crewman through June 1944. The remains were thoroughly commingled and represented as many as 400 individuals who were buried in mass graves that spread over 52 different burial sites in the Halawa Naval Cemetery and the Nu’uanu Naval Cemetery in Hawaii.

In September 1947, tasked with recovering and identifying fallen U.S. personnel in the Pacific Theater, members of the American Graves Registration Service (AGRS) disinterred the remains of U.S. casualties from the two cemeteries and transferred them to the Central Identification Laboratory at Schofield Barracks. The laboratory staff was only able to confirm the identifications of 35 men from the USS Oklahoma at that time. The AGRS subsequently buried the unidentified remains in 46 plots at the National Memorial Cemetery of the Pacific (NMCP), known as the Punchbowl, in Honolulu. In October 1949, a military board classified those who could not be identified as non-recoverable, including Wood.

In April 2015, the Deputy Secretary of Defense issued a policy memorandum directing the 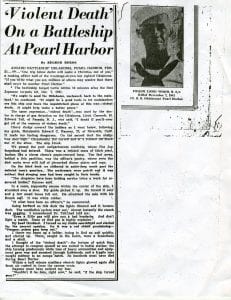 “When we were asked to submit a DNA sample it all became a little more real,” said Jack. “I have visited the mass graves in Hawaii several times, but I always thought that was as close as I would come to paying my respects to my uncle. But when we sent off the DNA samples, I was hopeful.”

With DNA from Jill and Jack to compare against some of the remains exhumed from the mass graves, the remains of Frank Wood, Navy Seaman 2nd Class was identified.

On Saturday, Wood will be buried with full military honors in Franklin. 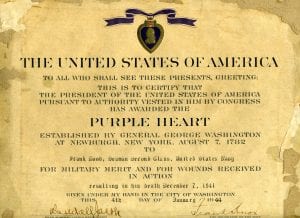 “My mom moved to Franklin many years ago after she married,” said Copp. “When my grandparents became elderly and ill, they moved to Franklin so that my mom could care for them. When they passed away, they were buried at Carson Cemetery. That is where my mom will also be buried, and where Frank’s sister is buried, so we wanted to bury him here with family.”

Jack said that he remembers his grandmother having a gold star in the window in honor of Frank after his passing and believes the opportunity to finally bring Frank stateside and to have a proper burial will bring closure to his family.

“More than just giving my family closure and paying respects to our uncle, I believe the burial this weekend will mean a lot to so many,” said Jack. “I have been so blown away with the support of the community who want to take part in the service on Saturday and believe it’s a testament not just to the community there in Franklin, but to what these soldiers meant to a nation all those years ago.”

The family will receive friends on Saturday, April 14, from 12:30 to 1:30 at Macon Funeral Home. A full military burial will follow at 2 p.m. at Carson Cemetery. The public is invited to attend to pay their respects.

Of the 16 million Americans who served in World War II, more than 400,000 died during 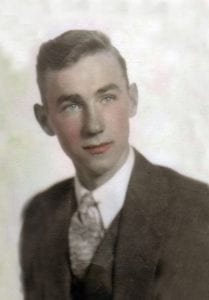 the war.  Currently there are 72,934 service members (approximately 26,000 are assessed as possibly-recoverable) still unaccounted for from World War II. Wood’s name is recorded on the Courts of the Missing at the National Memorial Cemetery In Honolulu, along with the others missing from WWII. A rosette will be placed next to his name to indicate he has been accounted for.

For additional information on the Defense Department’s mission to account for Americans who went missing while serving our country, visit the DPAA website at www.dpaa.mil, find us on social media at www.facebook.com/dodpaa or call (703) 699-1420.

School board member Arnold not new to workings of school system