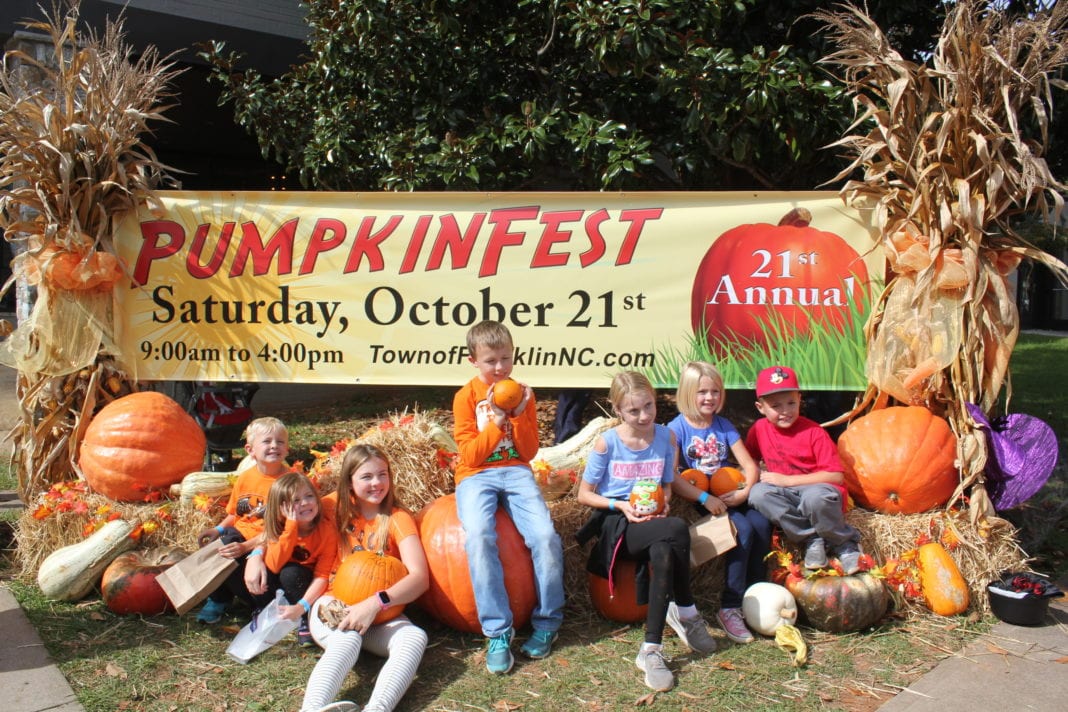 For two decades, the town of Franklin has hosted PumpkinFest, an annual fall festival that has grown into a destination event for families across the southeast. Last Saturday’s event garnered record crowds with officials estimating more than 5,000 people visiting Main Street.

“It has been phenomenal the way [PumpkinFest] has grown,” said Franklin Mayor Bob Scott. “Who would have thought 21 years ago that we would have a festival where more than 700 pumpkins would be rolled down Frog Town Hill and thousands of people would be wandering around town having a wonderful, family-oriented time?  I have heard so many compliments on the town and what a wonderful place it is.  I am very proud of the town employees who worked so hard to pull this off. Wonderful day!”

Franklin’s largest annual festival has events for all ages, but the main event is the annual Pumpkin Roll down Frogtown. This year’s event saw 692 pumpkins which all rolled down Phillips Street, with the winner scoring a $100 cash prize from the town of Franklin. The winner of this year’s pumpkin roll was three-year-old Stella Gillies of Locust Grove, Ga., with her winning pumpkin rolling 985 feet, just shy of last year’s record roll.

This year’s event featured a record number of 88 vendors and booths offering something for everyone including food, mountain arts and crafts, entertainment and community organizations lining Iotla Street and Main Street.

From the top of town hill down to the red light above Lazy Hiker, families and children had an array of games and activities. This year’s festival nearly doubled the children’s activities, with Biltmore Church once again sponsoring a kids zone on one end of the festival with inflatables and games, and the town of Franklin sponsoring the opposite end of the street with free pony rides and more inflatables. The Smoky Mountain Center for the Performing Arts made a special appearance at this year’s PumpkinFest, with characters from the book “Where the Wild Things Are,” a play the Overlook Theatre Company had put on in the past. Read2Me gave away 370 to children attending the festival.

Nearly 100 people from birth to adults lined up for the costume parade up Main Street. After waving to festival goers along Main Street, participants lined the Gazebo stage for the annual costume contest. Three judges, Vice Mayor Patti Abel, and council members Barbara McRae and Joe Collins were tasked with judging each costume and naming winners in various age categories. Council member Adam Kimsey was the emcee for the contest and helped introduce each contestant as they took the stage.

For the second year, street performers mingled with the crowd  and ate fire on the Main stage. The performers were members of the Thimblerig Circus from Atlanta, Ga., who performed three shows featuring dangerous stunts, amazing feats and bizarre acts in between walking the streets of Franklin as Uncle Sam on stilts and other characters.  “Howie the Great” who has performed on television and at major events such as NBA games and the Olympics in Atlanta made his debut this year and also performed on Saturday.

“This year’s Pumpkin Fest was a tremendous success,” said Town Manager Summer Woodard. “The festival continues to grow each year. This year’s Pumpkin Fest included two kids zones, pony rides, roving street characters from Where the Wild Things Are , a magician and circus performers. The Pumpkin roll had 692 contestants register to roll their pumpkin down Frog town Hill. The costume contest had over 100 participants. I met a couple this year who were from Atlanta, GA and they have been attending Pumpkin Fest for 5 years. The past two years they have started bringing they two small children to pumpkin fest so they can enjoy this unique and family friendly festival. Town staff, vendors and entertainers do an outstanding job each year making this festival a success.”

A crowd favorite and ever popular pie eating contest was once again held on the town square, and featured a dozen contestants eating as much pumpkin pie and whipped cream in 60 seconds. Council member Brandon McMahan had the impossible task of judging the contest and after keeping a close eye on all contestants, was able to name a winner of the 12 and under division as well as the 13 and older group. Joshua [last name] was crowned the winner for the children’s contest and Neil Alberry won for the adults. Both winners were given $25 prizes from the town of Franklin.

Fair winners come in all shapes and sizes