There are some things in life you just cannot explain.  I have always been attracted to a wildflower called Grass of Parnassus.  Every year late in the summer I begin looking for new colonies.  I have even been able to get a few started along our small stream. The first one I spotted years ago was along a bank of a creek on Rainbow Springs Road.  Closer to home several of us happened to find a colony along a small stream bed in front of a house that had been abandoned.  The moist ground there is covered with sphagnum moss which means it could be classified as a bog or the remnant of one.  This likely explains why the house was abandoned – constant moisture. The habitat that this plant prefers is a wetland-like a marsh, swamp, bog, fen or the banks of a stream.  A fen is a marshy area that is subjected to flooding.  Wet habitats make it a little easier to locate this plant as you know where to look.   It has another common name: Bog-Stars. 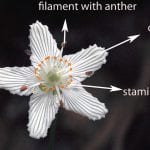 There are some curious things about this plant.  It is not a grass.  Parnassus is a mountain in the center of Greece where this plant grows in a marshy area along with native grasses.  Legend has it that the domestic cows on Parnassus seem to like the grass as well as these wild flowers.  So, the local residents have made these plants honorary grasses by association.

The mountain of Parnassus is the mythical home of Zeus’ nine daughters, the nine muses.  They preside over the arts and sciences including music and poetry. Scottish poet Andrew Lang published a book of poetry he entitled “Parnassus.” It became so popular that the term Parnassus now refers to a center of poetic and artistic activity.   There is a modern poetry magazine called Parnassus.

Grass of Parnassus can reach up to eight inches.  The flowers have five white petals with green veins radiating outward from the ovary which is in the center.  The green veins are often called insect landing strips or nectar guides.  They direct insects to the flower’s nectar and pollen. Halfway up the flower stalk there is a single leaf that wraps around the stem which creates the illusion that the leaf has been perforated.  That leaf form is called perfoliate.

There are 12 species of Parnassus world-wide and we have three in North Carolina: asarifolia, grandiflora and carolina.   Carolina is only found along our coast.  The most common one here is Parnassus asarifolia.  This species has kidney shaped leaves that resemble the leaves of wild ginger-Asarum canadense. This explains its species name. The leaves of grandifolia are longer and more pointed.

There are some flower reproductive structure differences that are key in differentiating asarifolia from grandiflora.  But it requires good eyesight and/or a hand or jewelers’ lens.  The only way to accurately tell the difference between the two species using just the leaves would be the have the two plants side by side for comparison. (See labeled photos)

A stamen is the male fertilizing part of flower.  It consists of a filament (stem) whose end or tip has a swollen pollen laden structure called an anther.  Also, there are other similar structures called staminodes that look like stamens but do not have an anther thus have no pollen.  They produce nectar that attracts insects. The staminodes of Grass of Parnassus have orange nectar tips and are sterile.

Parnassus asarifolia has staminodes that are shorter than the stamens and the petals have 11-17 green veins. The leaves are kidney shaped.

Parnassus grandifolia has staminodes are longer than the stamens and the petals only have 5-9 green veins.  The leaves are larger and pointed.  This species is uncommon.  I have only seen it once.

These plants have to be cross pollinated.  They cannot be self-pollinated even though they have both the male and female parts. Each individual bloom has its own sequence.  The receptacle of the ovary that receives pollen, the stigma, stays closed until all the pollen has been collected from its flower.  The empty anthers drop off.  This explains why we see a few examples of just filaments with nothing on the ends, no anther.  Also, only one anther opens at a time which helps avoid the wasted effort of self-fertilization.  Once all the anthers are empty the stigma opens so it can be fertilized with pollen from neighboring flowers collected by traveling bees, butterflies and flies. These insects are attracted to the nectar.  Sooner or later they accidentally brush against the anthers whose pollen adheres to their body hairs. So, each insect carries pollen from many blooms. While feeding on nectar they will accidentally come in contact with an open stigma shedding  pollen  so it can travel down the stigma to the ovary. Seeds are produced and colonies form.

One of Karen’s great photographs of Parnassus asarifolia shows ants feeding on the nectar of the staminodes. However, ants do not contribute to the flower’s fertilization as very little of the pollen gets stuck to their bodies as they lack body hairs.  In addition, ants cannot fly from bloom to bloom as do flies, butterflies or bees.

In the past extracts from these plants have been used as diuretics, sedatives, tonics and dried portions ground and applied to wounds to improve healing.

So, when close to a marshy wetland area look for these plants from September until mid-November.  Notice if the anthers are still present or not.  Observe the variety of insects feeding on the staminodes.  At what stage is each bloom in its reproductive dance?  Plus, your observations just might inspire poetic thoughts and a poem or two.