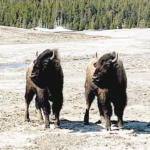 After touching down in Bozeman, Mont., on June 14, it was quickly evident that something was amiss. While driving from the airport to West Yellowstone, flashing signs communicated “All Entrances Closed.” As one of the most popular national parks in the United States, the 150th anniversary year of Yellowstone was supposed to be a banner year after two years of pandemic upheaval. However, what a U.S. geological survey is referring to as a “1,000-Year Flood” occurred on June 13. 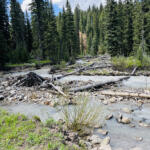 More than 10,000 visitors were ordered out of Yellowstone as unprecedented flooding tore through the northern half of the park, washing out bridges and roads and sweeping an employee bunkhouse miles downstream. Remarkably, no one was reported injured or killed. River took chunks of roadways, washed away hiking trails and boardwalks, and choked areas with debris.

While limited entrance to Yellowstone was allowed beginning June 22, with a system of odd and even days for travelers depending on the last number of their license tag, vacationers with Yellowstone plans still have plenty of opportunities to experience Montana’s “big sky” and Wyoming’s vast views – even when venturing off the popular park-related radar. Cancelling vacation plans is not necessary.

For instance, people with reservations in West Yellowstone, with plans to tour Yellowstone National Park from that entrance, may not realize that Montana’s Custer Gallatin National Forest, comprised of 1,819,515 acres, actually borders Yellowstone and includes portions of both the Absaroka-Beartooth and Lee Metcalf Wilderness areas within its boundaries, which means the stunning mountain ranges and peaks – many of which stay snow-covered much of the year – are seemingly endless.

In fact, Yellowstone and Custer Gallatin share the same ecosystem and opportunities to see wildlife, yet the National Forest areas are much less congested and currently much more accessible. The forest provides opportunities to fish for three species of trout in the major tributaries of the Missouri, Gallatin, and Madison rivers. Views are resplendent with jagged rock cliffs, which are often replete with bighorn sheep and bearded mountain goats. But then there are summits galore, including six separate mountain ranges: Madison, Bridger, Crazy, Absaroka, and Beartooth. The Beartooth range is home to Granite Peak, at 12,799 feet, the highest in Montana. 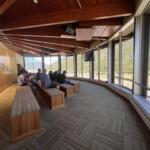 And then the well-marked hiking trails are so abundant, one would need months to tackle them all. Fly into Bozeman, Mont., and drive Hwy. 191 to West Yellowstone, which takes a surprise, no-gate-entry-necessary pass into Yellowstone National Park for several miles. And this is a section that was not damaged by flood waters. Along the 88-mile spectacularly scenic 191 are 10 main day-hike trails, including Porcupine Creek, Buck Ridge, and Windy Pass, as well as three suggested backpacking trails (see https://www.fs.usda.gov; “Gallatin Canyon, Hwy 191 & Big Sky”).

Finally, once in West Yellowstone, instead of only partaking in the obvious – entrance into Yellowstone National Park and access to currently only about half of the park (the other half may take a year or more to open again) – drive the 25 miles along Hwy 287. This route is almost entirely in view of Hebgen Lake, the Madison Range, Mt. Hebgen, and the waterway that flooded a valley when in 1959 a 7.5 earthquake sifted the landscape creating what is now known as Earthquake Lake. There, the Custer Gallatin National Forest maintains an informational and educational visitor center with a fascinating look at how the majestic landscape was formed. Return to West Yellowstone via the same route, or make a similar-distance loop into Idaho to view Bighorn Mountains, a spur extending from the Rocky Mountains approximately 200 miles northward on the Great Plains.

Almost every roadway affords a chance to see everything from bison and elk to mule deer and moose. Less frequently seen are coyotes, wolves, grizzlies, and foxes, but are plentiful in this wilderness. Eagles, osprey, trumpeter swans, and cranes are commonplace.

Once the exploratory, off-the-beaten-path adventure is completed, the return trip from Yellowstone and West Yellowstone on 191 is a stunning “see you later” before boarding a plane at the Bozeman airport.