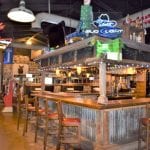 For the last half decade, Blueridge Roadhouse, also formerly known as Cody’s, restaurant has set vacant right smack dab in the middle of Franklin. The building was built in the early ‘80s and was originally a Western Sizzlin’ steakhouse. Since becoming vacant it has been on the market at a price tag of over a million dollars, which has garnered little interest from buyers. After failing to sell, the property was returned to the bank. All that could potentially change on Sept. 7 at 11 a.m. on-site at the property at 319 Carolina Mountain Drive when the property is set for an absolute auction with intent to sell to the highest bidder without reserve.

“If memory serves me, it started as a steakhouse and it was fabulous,” said Mayor Scott. “Great decor and ambience of an old time roadhouse restaurant. Very rustic. Then it became more of a regular style restaurant and I remember it had a buffet lunch.  There was a bar I think.  Beer and wine but not mixed drinks?  It seemed as though it was always busy.  But what happened later I have no idea.  I heard it was a small chain of restaurants which went out of business.”

The “great decor” Scott mentions is all part of the complete package going up for auction. According to the property listing, which is being managed by Re/Max Elite Realty agent Marty Kimsey, the building is a 7,000 square foot fully equipped restaurant on 1.53 acres right in the heart of Franklin. The parking lot has over 100 spaces and the inside of the building has 250 seating capacity.

More than just a restaurant, the building has a full bar with 14 beer taps already installed. There are four offices throughout the building, a huge kitchen and prep area and even employee restrooms. While the property doesn’t currently have outdoor seating, there is room around the outside to easily add an outdoor patio. The auction is really the “complete” package as dishware, glasses, utensils, table cloths, and menus are all included in the sale.

Town Planner Justin Setser explained that the property is currently zoned C-2 Commercial, which allows for any uses in C-1 and C-2. The property is excluded from any industrial uses.

“That zone allows almost all businesses minus large car dealerships, sweepstakes businesses, industrial uses and adult business,” explained Setser. “So you could imagine restaurants, offices, indoor –  outdoor recreation, retail, breweries, civic centers and automotive repair to name a few. There is many more than that.”

With the zoning potential for commercial businesses, Scott said the economic impact the property could have for Franklin is wide-spread.

“I believe it depends on what it is used for,” said Scott of the potential economic impact. “I believe Franklin is ready for a good soul food, catfish, fried chicken, country ham, local vegetable place with cornbread and traditional Appalachian food and music.  Something very mountain and authentic.”

Scott said that while there are a multitude of potential uses, he would like to see a large scale restaurant establish roots on the property.

“I still believe the right type restaurant, music and atmosphere of the mountains will make it,” said Scott. “Friendly, accommodating, and genuine. It is easy to get to and a good location. I hate to see it just sitting there empty.  I feel there is great potential for a peanut shell on the floor, mountain vittles place, with a bit of blue grass mixed with opera.”

Scott may very well get his wish come Sept. 7. The property is going up for sale as an absolute auction which is an auction where the sale price is not subject to confirmation of the high bid. At Absolute Auction, the property sells to the highest bidder.

In the real estate world, an absolute auction is basically a “sure thing” in terms of a sale.  The property is usually sold in “as is” condition, with no contingencies, except the seller is required to grant clear title to the property. There is no minimum bid and the property will be sold on auction day to the highest bidder.

The property is currently owned by VanDrake Investments, which acquired the property earlier this year as part of a package deal of bank-owned properties across the state. The “turn-key” restaurant has already garnered interest from potential buyers both near and far. From pizza, to BBQ, to steakhouses, the realty said he has received interest from people in New York and Atlanta, and several inquires from individuals around WNC.

“We bought the restaurant as a package from a bank’s portfolio,” said Benjamin Vanhook with VanDrake Investments. “We are currently spending time and resources to bring the restaurant back up to standard. In doing so we hope to attract a great buyer that will give Franklin a restaurant it needs and deserves. We know we aren’t the people for the job but hope we can find that person and give Franklin a real asset.”

Macon County Economic Development Director Tommy Jenkins did not return attempts for comments regarding the economic impact of the property.

No New Details On ADA Vacancy, Only Sunny Outlook