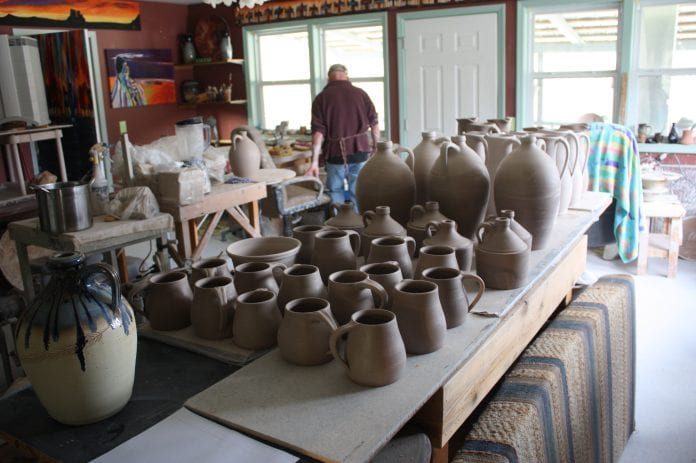 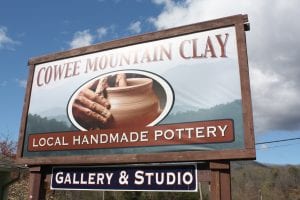 Cowee Mountain Clay houses a gallery and studio of traditional handmade pottery, all fashioned by local craftsman, Brian Davenport.  His personal passion and dedication for his work revolves around three words ― traditional hand-made pottery. These words not only define his work, but also dominate his conversation as he speaks about the pottery he creates.

Davenport opened his gallery and studio at the foot of Cowee Mountain, on highway 441, in 2013.  He said that one of his goals is that “when people enter the gallery, they will see something they’ve never seen before.”  His desire is to create very special pieces of work.  When guests and customers enter the gallery, they are amazed at the veritable wonderland of hand crafted pottery that greets them. The inside of this average, nondescript building contains an enormous amount of remarkable work, all created by Davenport.

Whether the pottery produced is fired in propane or wood fired kiln or is hand polished the same passion and desire for excellence goes into every piece.  Everything he does is hand-made; he uses nothing to speed the process up or to cut corners. He chooses to hand form every handle that he puts on his pottery in order to help keep this heritage type art form alive.  His glazed pottery is reminiscent of the earthenware that might have been found in North Carolina homes of the 19th century.

Although he has only been making pottery professionally for the last six years, the roots of 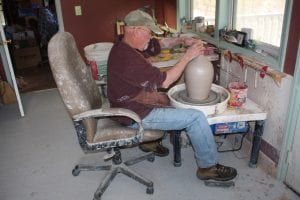 the craft he now practices reach back to the early years of his life as he was growing up in New Mexico.  Actually, his early years in the southwest are reflected in his traditional polished pottery of that area.

When Davenport was in high school in New Mexico, he enrolled in an art class.  According to him, he had no art talent; he couldn’t draw, but there he was taking art.  While trying to muddle through the art class, he noticed a potter’s wheel off in a corner gathering cobwebs from disuse.  He approached the teacher about letting him use the wheel since he wasn’t well versed in the traditional art forms taught in the class.  He was immediately hooked on forming pottery and his passion for pottery-making was birthed as he spent the next two years learning the basics of the craft.  Even today, he still carries that early passion and love of working the clay with his hands, often referring to the therapeutic effects of the mental concentration and physical skills of the craft.

Over the next several decades, the realities of life set in and the pottery making was kind of pushed to the back burner so he could concentrate on making a living.  During the ensuing 20 years, he worked in masonry and construction in San Diego, Calif., and as a commercial fisherman and in real estate in Fort Lauderdale, Fla.  He was highly successful in all these things and that success allowed him to move to Franklin in 2005 to begin to practice the craft that he loved without worrying where his next meal was coming from. 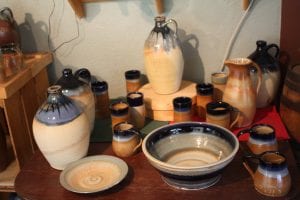 In 2010, he signed up for the pottery program at Southwestern Community College, a course he described as “fantastic.”  He said his stint at SCC was the final phase (allowing him to concentrate on refining his skills) bringing him to the place he now enjoys.  In 2013, he became fully professional, opening his studio and gallery here in Franklin, with a growing and loyal clientele every year.

Davenport is an affable man, knowledgeable and skilled in his craft, willing to share his knowledge in layman’s terms enabling most anyone to understand the fundamentals of pottery.  The entire process involves several steps, all equally important to producing a high quality product.  Inattention to detail or taking short cuts will result in inferior products prone to stressing and cracking, discoloration or a number of other defects that would discourage repeat customers.

All handmade pottery begins with a lump of clay on the potter’s wheel.  As the wheel turns, the potter forms the clay into whatever piece he desires, whether it is a cup, bowl, pot or even an Appalachian Birdhouse.  Davenport forms up a cup in one minute, 20 seconds, which doesn’t sound like much time for a piece that will eventually sell for around $20, but this is only the beginning of a journey through several stages.  Then he will hand form the cup’s handle and set it aside while he forms another.

After the pottery is formed, it is moved into the drying room to dry thoroughly and be cleaned up.  The pieces are kept here until they are ready to be fired in the kiln.  Firing the pieces is very critical to the quality and strength of the pottery.  For example, glazed pottery will go through an initial firing at 1900 degrees.  After cooling, glazes will be applied in multiple layers.  Then the pieces will be fired in the kiln at 2345 degrees.  This firing is called reduction firing as the oxygen in the kiln is reduced during the firing, bringing out the colors of the glaze.  Davenport says the best temperature for quality and strength is 2345 degrees.  Lower temperatures may save a little fuel cost, but will produce pieces more prone to cracking and breaking.

Davenport uses 2,000 pounds of clay each month, which comes out to about 100 pounds or more of finished products each day. He not only makes his products to be useable and aesthetically pleasing, he makes stoneware to last a lifetime, and guarantees satisfaction with all his work.

Visit Davenport’s Facebook page, coweemountainclay, or go by the gallery on 441N. to see the real deal.