Editor’s Note: An earlier version of this article quoted TDA member Tim Crabtree as having made the statements and votes that fellow member Donnie Bishop made. Macon County News regrets the error.

It was the end of an era Monday in the downstairs boardroom of Franklin’s Town Hall. 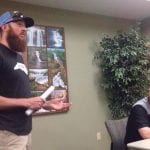 After nearly a decade of service, Candy Pressley stepped down as chairman of the Tourism Development Authority. But it wasn’t necessarily a big moment for her or anyone else, despite her move with the TDA being a long time coming.

“I don’t think I have a voice as the chair,” said Pressley, who’s served on the board for about a decade. “I’d have more voice as a board member. I’m not a voting member unless there’s not a quorum. I think being on the board would be nice so I could vote on things. I want to make a difference. I can’t sway anyone one way or another.”

Things were a lot different back when Pressley joined the board. Back then, she believed in tourism. She wanted to play more of a role in the community, and the concept of tourism development was still relatively new.

“Back then, we used to have a lot more discussion before we voted, about what we would get behind and how we could bring more tourism to the area,” she said. “I don’t ever feel like there’s discussion anymore. People feel like they can’t and like they have to shout over one another.”

It was around that time that the Town of Franklin was also undergoing a lot of change. Some years ago, the town made the change from an administrator form of government to a manager-council form of government. In essence, the change meant the town would go from having seven administrative bosses overseeing government operations – that’s six aldermen and a mayor – to simply having a manager who oversees such tasks.

“It was a lot different than in the past,” recalled Mayor Bob Scott. “A greater deal of town employment relied on the board. What we have now is totally professional. It’s ‘what you know’ not ‘who you know’. We’ve always had great people working for the town, but the way it was lended itself to a lot more doubt by some. The situation now is more about qualifications and transparency.”

Donnie Bishop motioned to reappoint Pressley and fellow member Connie Grubermann, but to appoint Grubermann as the new chairman of the Franklin TDA. Travis Tallent seconded and all voted in favor.

Last month the TDA was approached by Theresa Ramsey, who asked for a $2,000 for The Franklin Folk Heritage Festival which will be held on Aug. 18, from 10 a.m. until 4 p.m., at Cowee School Arts & Heritage Center. Ramsey billed it as a free, family-friendly celebration of “all things Appalachian.”

According to Ramsey, “cultural tourism is a fast growing niche in tourism and the festival is a valuable attraction,” she wrote in her application, adding that the event has a history of attracting visitors and locals alike. “We will cross-promote the event with other groups to give greater exposure to bring in more visitors.”

Crabtree motioned to approve the request for $2,000, and Grubermann, the new chair, seconded. TDA member Joshua Drake cast the only dissenting vote.

“I’m not opposed to supporting this, I’m opposed to giving them the same thing we gave them last year,” said Drake.

Grubermann, who also sits on the county’s Tourism Development Commission, pointed out that the TDC granted the festival what it requested.

Drake then argued that the premise behind tourism grants is to help groups like FHA become more self sufficient so the TDA “can give less and less, and we can get behind other festivals.”

“We want this to be an annual event,” said Ledford at the time, adding the event is billed as a weekend long festival marketed toward younger demographics—ages 20 through their late 30s, with disposable income. “We’re trying to drive in that money to the local economy and we’re currently performing a strong social media campaign, too.”

The funding requested would go toward ensuring the success of this year’s event, as well as those of future festivals. While the board was clear on the intent and purpose of the event, they expressed general confusion on his justification and other minor details–similar to that of the Town of Franklin last week, who voted against a street closure Ledford requested.

Grubermann recalled from their notes that last year’s event saw about 250 festivalgoers, and that it aimed to attract 850 this year.

With only $30,000 in the TDA’s total festival budget, Drake summed up the TDA’s reasoning.

“I like Jimbo,” he said. “I think what he’s doing is a great thing, I don’t think we can afford to spend a sixth of our budget on a concert…  If he’s going to do this three or four times a year, and then come back next time for $5,000, you can assume he’s gonna get half of our budget.”

Even at the projected amount of festival-goers, Drake felt the TDA’s funding would be spread far too thin for too few people. With the Naturalist Trail Run, he said, it would amount to $6.42 per person. The Heritage Fest would be $1.67 per person.

The Chamber of Commerce requested $4,500 for a portion of advertising and promotion for this year’s Mountain High BBQ Festival & Car Show on Aug. 10 and 11. The funding would also help cover the added expense of this year’s entertainment, Summer Brooke and Mountain Faith, Jef and Professor Whizzpop.

“I think that’s too much,” he said. “I fully want to support it, but now it’s in its 10th year… It’s not the TDA’s job to fund the Chamber of Commerce.”

Despite getting hung up on the initial motion, the board acquiesced to Drake. He pointed out the TDA didn’t support the event last year. “I think they can do it without us,” he said.

“I make a motion we give them $1,000,” he said, to which Grubermann again explained to Drake the previous motion has to be dealt with or die.

“I thought I let it die,” said Drake, spurning the nervous laughter of some board members. “It was going to die a slow death. I was going to put it out of its misery.“

Pressley suggested more than $1,000, echoing Tallent’s view that a middle ground be met between Drake and the board.

“Is the motion dead?” asked Drake. Pressley confirmed that it was dead. “I make a motion that we give them $1,000.”

“I think somewhere in between,” said Tallent, which the rest of the board agreed on.

“There is somewhere in between,” said Grubermann.

“So, did that motion die?” Bishop asked.

“Sure,” said Drake, frustrated. Bishop motioned to grant $2,500, and then Grubermann seconded.

“That’s still too much,” said Drake.

“Yeah, but it got seconded,” said Grubermann.

“I understand,” said Drake. “It got seconded but that doesn’t mean it’s not too much.”

“As the Board, I think we need to have more discussion, otherwise there’s going to be more of this,” said Pressley, to which Bishop agreed.

Pressley then asked who all was in favor of the motion, and right before it was about to carry, Tallent interjected, saying that the board could find a happy medium between $2,500 and $2,000.

There was confusion about where the board was, and to settle it, Tallent voted against the motion – which had enough votes to pass – and Grubermann motioned for $2,000, which Drake seconded. The motion passed.