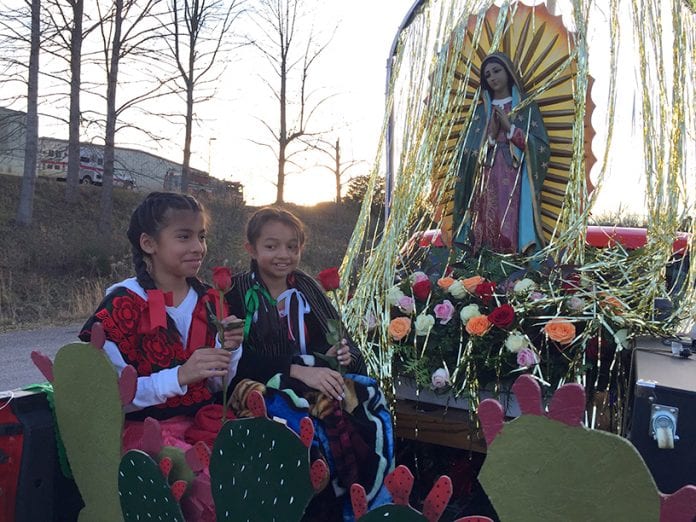 On Dec. 9, 1531, it is said that the Virgin Mary appeared to a young Aztec boy named Juan Diego outside Mexico City, asking for a church to be built at the site.

Juan Diego was in an arid desert, surrounded by cactus. He related his apparition to the Archbishop of Mexico City, who did not believe him. Again, the Virgin Mary appeared to him, telling him to insist. The Archbishop told him to return to Tepeyac Hill where he had seen her and ask for a miraculous sign.

Juan Diego returned the following day, informing the Virgin Mary of the request and promising to return the next day.

Meanwhile, Juan Diego’s uncle fell sick and he could not return to meet the Virgin Mary until the following morning, Dec. 12. Ashamed that he had missed his appointment, Juan Diego tried taking a shortcut to the hill when the Virgin Mary appeared to him again, and asked “Am I not here, I who am your mother?”

The Virgin Mary assured him that his uncle had recovered and instructed Juan Diego to gather flowers from the top of Tepeyac Hill. There should have been no vegetation in December let alone flowers at the barren site, but Juan Diego found roses blooming. He gathered them in his tilma, or cloak, to deliver to the Archbishop.

When he returned, Juan Diego discovered his uncle had fully recovered. He, too, had seen an apparition of the Virgin Mary, who asked to be titled “Guadalupe.”

When Juan Diego arrived to the archbishop, he opened his cloak and the roses fell out, leaving an image of the Virgin Mary on the fabric.

Monday night – nine days before the feast of Guadalupe on Dec. 12 – members of the Franklin Mexican community gathered at the Industrial Park soccer field to take part in a procession to St. Francis Catholic Church in honor of the Virgin of Guadalupe.

“Here in the United States, this is the fourth year we have done this procession to the church to celebrate,” said Alvaro Mendoza in a Spanish language interview. Mendoza is a member of the Guadalupe Committee, which organizes the event each year.

Festive Ranchero music played from a loudspeaker mounted on the back of a pickup truck. Two young girls, dressed in cloaks and holding red roses, sat proudly amidst cactus plants and giant cardboard cutouts of cacti. Their hair was neatly braided. Multi-colored roses adorned the base of a statue of the Virgin of Guadalupe, the most important symbol of Mexican Catholicism.

Two dozen more children and their families held gold and white balloons. Parents handed out notes for them to write their wishes. The notes were neatly folded and tied to the balloon string to be released when they arrive at the church.

“The procession is our sacrifice to the Virgin of Guadalupe,” explained Salvador Vazquez in Spanish. Vazquez is part of the Guadalupe Committee, which organizes the event each year for Franklin’s Mexican community. His daughter was one of the girls chosen to accompany the Virgin. “We will be praying to the Virgin as we walk and thanking her for her miracles along the way.”