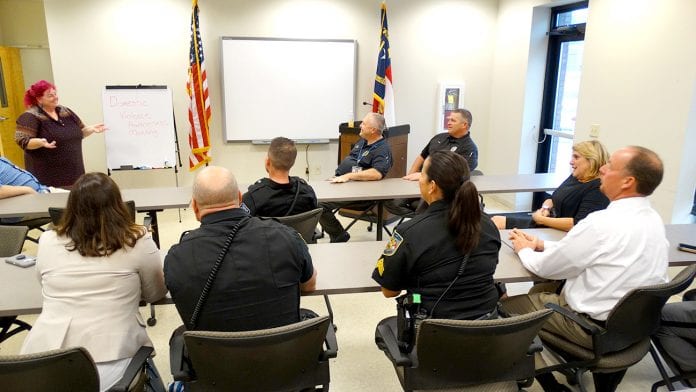 David Adams, chief of police for the Franklin Police Department for the last six years, was in attendance at last week’s Oct. 1 Town Council meeting to hear the proclamation set forth to designate October as Domestic Violence Awareness Month. Adams has been a board member with REACH for four years. He says he gained an awareness of and concern for domestic violence issues as a former detective in Hendersonville, N.C. It was during this time that he even worked domestic violence murder cases.

“Domestic violence is an issue here as it is all over the United States,” said Adams. He hopes a month of focused awareness on the issue will “encourage people to get help. If a family member or friend knows of someone who needs help, it may save that person’s life.”

Also in attendance at the Town Council meeting was Andrea Anderson, REACH executive director, and Andy Hall, REACH lead court advocate and Latino outreach coordinator. REACH, which stands for Resources, Education, Assistance, Counseling, and Housing, offers all of these through intervention and prevention and a coordinated community response to domestic violence and sexual assault in Macon and Jackson counties.

The proclamation, signed by Mayor Bob Scott and Travis Tallent, Town Clerk, encourages citizens to “observe the month by becoming aware of the tragedy of domestic violence and supporting community efforts  in working towards its end.”

According to Anderson, many volunteer-run efforts in October are designed to provide education about REACH and understanding of domestic violence and sexual assault, including:

– members of law enforcement and first responders wearing purple ribbons to show support for the initiatives;

– the hospital, library, and other facilities providing information;

– weekly awareness-based displays at the REACH for Bargains & Treasures Thrift Store at 158 Heritage Hollow Drive in Franklin; and,

– an unveiling of an informational video that walks through a victim’s experience.

Anderson said materials and displays will highlight the many dynamics of a victim’s experience, such as how children are impacted, what to do if there are pets in a home, financial empowerment, how to secure a safe environment, and much more.

“The goal is for victims not to go back to abuse,” said Anderson.

Hall pointed out that more than 1,018 court advocacy services were provided for victims in 2018, and in Macon County alone 641 hotline calls were received. Anderson added that last year 474 victims and children were served, with 82 requiring shelter.

Anderson and Hall said there are many ways citizens can help bring awareness to domestic violence and abuse and support REACH: from shopping at the thrift store to assembling care packages to donating monetarily. “Many victims come to us with nothing … no belongings,” said Anderson. “So we are scrambling to get them what they need right away.”

REACH operates a two-year-old multi-bed shelter that provides a safe place for victims. Often, there is an influx of immediate needs. Just last week, in fact, Anderson said four families in one day needed help and shelter.

In the October 1 proclamation, applauded were the efforts and “compassion and dedication” of volunteers like Adams and many others, as well as professionals such as Anderson and Hall.