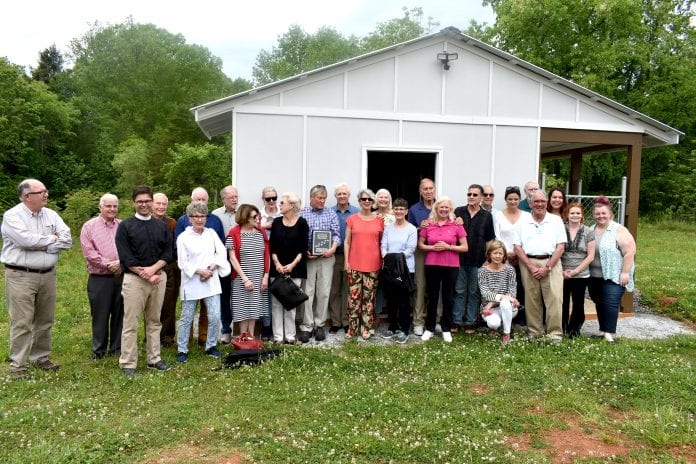 REACH (Resources, Education, Assistance, Counseling, Housing) of Macon County unveiled the newest addition to their domestic violence shelter, at a ceremony, on Saturday May 4, 2019.  A climate controlled kennel was recently built, on site, to provide shelter to dogs and cats of domestic violence victims.

RedRover is a not-for-profit organization that was founded in 1987 by animal rights pioneer Belton P. Mouras. Their agency reports that 50% of victims of domestic abuse delay leaving their abusers out of fear of harm to their pets, and 71% of pet-owning women entering women’s shelters reported that their batterer had injured, maimed, killed or threatened family pets for revenge or to psychologically control victims. These statistics supported their lived experience and propelled them forward in building an emergency animal shelter.

In February, 2017, REACH assistant Jennifer Turner-Lynn reached out to several agencies including the Episcopal Church of the Incarnation, in Highlands, to say that the kennel was at the top of the agency’s wish list.  After months of planning, designing, getting permits, bad weather, site preparation and working out funding for the kennel, the slab was finally poured in June of 2017. Parishioners of the Episcopal Church of the Incarnation volunteered and got busy building the kennel. Bill Lee, Peter Ray, Tom Claiborne, Don Duggan, Gary Moore, Bill Walker, Mike Dupuis, Frank Shimsky and Billy O’Dell were among the folks from the church who worked on the kennel.

REACH learned that Bayer Animal Health Co. was giving grants to spouse abuse shelters that need facilities for animals. REACH applied and, as one of 13 shelters throughout the United States, won a grant for $10,000.00. That money would allow them to put in heating and air conditioning, run water to the kennel and build perimeter fencing.

In July they raised the trusses with the help of three professional carpenters, paid by an anonymous parishioner, but other than their help that one day, the slab pouring, and the electrical work, all of the other work was carried out by the Incarnation volunteers. Two, three, sometimes four days each week, they showed up. “Progress seemed slow at times but completing each phase of construction proved great satisfaction,” explained Bill Lee.  Concrete work was done by Charles and Sons, electrical by Justin Willis Electrical.  George Weikel of Jennings Building Supply, and Kenny and Kyle Ledford, of KL Metals contributed advice and materials. The last “dabs” of paint were applied on Christmas Eve, and after a final clean-up, the keys to the kennel were turned over to REACH administrators.

The kennel has four dog runs, with inside and outside enclosures connected by “guillotine” doors, operated from inside using a pulley system. Chain-link fencing separates the dog runs and each is accessible by inside or outside gates.  There is also a room for cats or other small animals.  Additions are constantly being added on, but the kennel is fully functional.

REACH administrators occasionally travel to other spouse abuse shelters in North Carolina and nearby states.  Turner-Lynn and  Lee were talking about this one day and Lee asked her if any of them had pet kennels. “Some do,” she said. “Well how will the one we’re building measure up to the ones you’ve seen,” Lee inquired? “When you finish building this, we’re going to have the Taj Mahal of kennels,” she replied. As proof of this grandiose building, a photo of the Taj Mahal is proudly displayed inside the kennel.

There is only one domestic violence emergency shelter in Macon County. REACH of Macon County serves both Macon and Jackson Counties. Anyone who is currently experiencing domestic violence, sexual violence, and/or human trafficking and is not an offender is eligible to apply for assistance. Clients receive emergency shelter and are provided with a case manager who can assist with court advocacy, safety planning, job and life skills development, psychoeducational classes which can include recreational support group, food assistance, and material assistance, as is available and based on resources. Some barriers that women and sometimes men, encounter when trying to get out of an abusive relationship are social-economic status, lack of transportation, lack of childcare, lack of employment, lack of a support system, and fear of humiliation.

Some statistics on domestic violence cases on abused women in Macon and Jackson County: