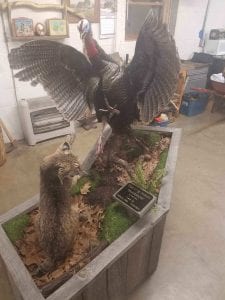 A turkey shot last April in Macon County is on its way to Nashville, Tenn., for the 42nd annual National Wild Turkey Federation Convention scheduled for Feb 14-18. The turkey will be on display after being deemed a world record winner for having the longest spurs on record. The turkey, which was shot by Willard Dills in the Cartoogechaye area sported 2 9/16-inch spurs. The National Wild Turkey Federation measured the turkey and confirmed that the spurs were the largest ever recorded in the world.

When scoring a wild turkey, the federation instructs hunters to measure each spur. Spurs must be measured along the outside center, from the point at which the spur protrudes from the scaled leg skin to the tip of the spur. Add both spur measurements and multiply the combined length of the spurs by 10.

Dills shot the turkey last spring on a tract of land he owns in Cartoogechaye. The turkey weighed 18.5 pounds and has such an impressive wing span it doesn’t fit through the doorway of Dills’ home. The turkey’s beard was 9.75 inches. Dills has been an avid hunter for 40-plus years and said that without a doubt, the turkey is the largest he has ever seen.

The National Wild Turkey Federation Convention is one of the biggest consumer shows in the country; where conservation and hunting’s most devoted supporters come together for a weekend of networking, learning and a lot of fun. The NWTF put together a convention and sport show that celebrates more than 40 years of conservation successes by NWTF volunteers and partners.

When the National Wild Turkey Federation was founded in 1973, there were about 1.5 million wild turkeys in North America. After decades of dedicated work, that number hit a historic high of almost 7 million turkeys thanks to the efforts of dedicated volunteers, professional staff and committed partners.

Special needs game is defining moment for our community