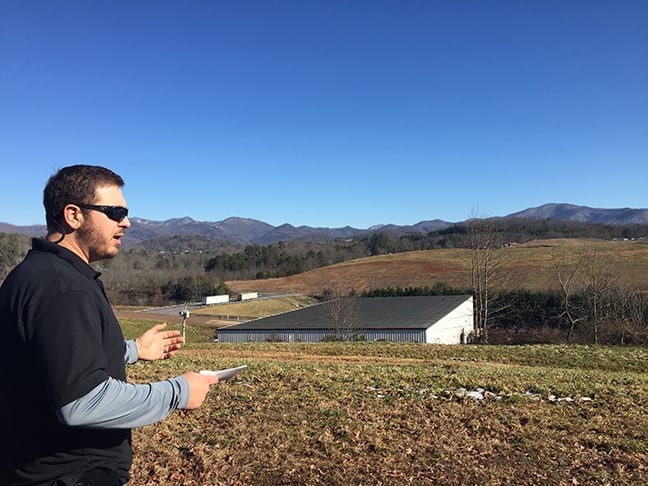 “I’m not an environmental nut by any means, but I know what needs to be done,” said Cribbs, 31, Macon County’s new Solid Waste Management recycling coordinator. “My wife got me to recycle. And when I started here, I’ve just seen how important it was … how it was needed.”

The former recycling nonbeliever is now an evangelist for responsible waste management, overseeing 10 local recycling centers, and the central recycling processing center, where all commodities are bailed and shipped off to buyers.

The county recoups $250,000 – $300,000 of its $1.1 million recycling budget, but Cribbs expects proceeds to decrease next year as China responds in kind to U.S. tariffs on its goods by halting purchases of mixed paper and plastics.

“The China market has killed us,” he said. The county currently sells recyclables at $90-$95 per ton of cardboard; $0.53 per pound for aluminum cans; 5-8 cents per pound for plastics, and the going rate for mixed paper is -5 cents, but the county’s provider takes it for free along with purchased cardboard.

The cost to taxpayers for every one cubic yard of landfill space is about $60. That’s why Cribbs stresses: “No cardboard in the landfills.”

Learning the ropes of recycling

Macon County has two “cells,” or plots within a land fill. The second, 12.5-acre cell has another 18 months’ lifespan. A new 8.5-acre cell is ready to open, part of a 4 to 5 cell landfill that will total approximately 35 acres and last 50-60 years. The cell is about the length of a football field and some 50 feet deep in some places.

Filled cells look like smooth, grassy bumps where a pasture once stood. The new cells have smooth, red dirt slopes and are topped with earth moving vehicles compacting trash. Layers within each cell are covered with a mix of dirt and mulched wood from citizens’ yard waste. Once covered, each cell will be grassed and mowed.

Cribbs helps with everything, including the occasional mowing, but his $37,356 salary is intended for him to oversee recycling. The criminal justice major at Southwestern Community College worked with young people for 13 years at the NGO [non-government organization] Project Challenge, helping to involve them in community service activities. He admits he has a lot to learn about recycling.

“I am learning the ropes and I love it,” he said, explaining that it’s really a “people” job. As the public face of the recycling program, community members’ phone calls ring directly to his desk.

“People are always complaining about something,” he said, from recycling centers being closed to roads not scraped enough, poor attendant attention, to explaining to people what they can recycle.

In an effort to address those issues, Cribbs visited recycling centers in Asheville and then each of the 10 collection centers, taking copious notes on what needed to be fixed, painted and upgraded to better cater to citizens’ needs and expectations. New trash compactors are on department’s wish list, too, to increase efficiency and reduce costs to the county.

Cribbs starts in a good place. Macon County ranks fifth among North Carolina’s 100 counties for pounds per capita recycling. But he still is trying to figure out how to change mentality.

“I’m still working on that,” he said. “If anybody wanted to come see what we do, I would love to show them around.”

Soon, Cribbs will be visiting schools to help young people understand the importance of recycling. He already has pencils made from recycled tires ready to hand out to children and adults.

“I would hope that the fact that them knowing that the stuff is going into the ground – and it’s not biodegradable – it’s not going to break down over 20-plus years, that it’s costing so much to have this landfill open, and when it fills up, where you can ago?” He asked rhetorically. “It’s only gonna cost the taxpayers more money.”

Cribbs returned in October from a weeklong trip to Iceland with his wife. He saw glaciers, waterfalls, icebergs and black sand beaches. All the while, he was looking for landfills and recycling centers. And he wondered: “What do people do here with their trash?”

Commissioners invest in recreational property for expansion of Zachary Park in...