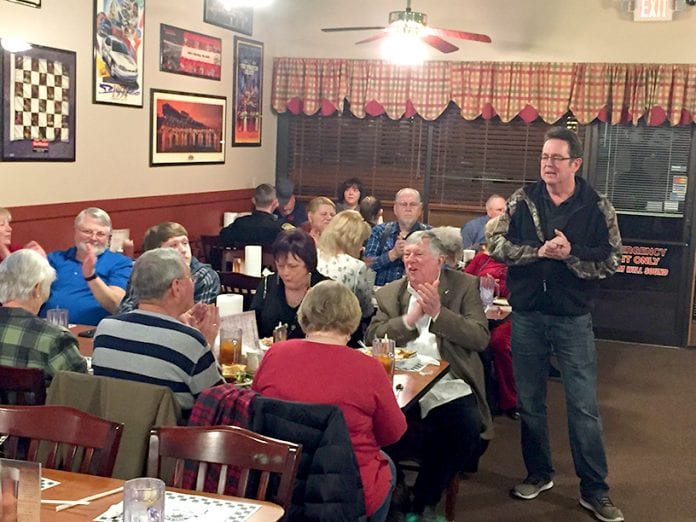 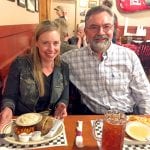 Even back in kindergarten, Rep. Kevin Corbin was a peacemaker. Kindergarten and East Franklin Elementary classmate Janet Gillespie remembers how Corbin helped those in need going back to playground days.

“He was just like he is now,” said Gillespie, alongside her husband, Macon County Commissioner Karl Gillespie, who both attended Rep. Corbin’s post-swearing in celebratory dinner at Fat Buddies Ribs & BBQ. “He was always the peacemaker – it comes naturally to him.”

Janet recounted a playground scene witnessed many times whereby if Corbin was a captain picking teams, his first choice was not the best, fastest, or closest friend.

“He would pick the last one first, and sometimes it would inspire the captain of the other team to do the same,” she said, before enjoying an “Dutch treat” dinner (where guests pay for their own) of barbecue chicken and baked potato. Reflecting on Corbin’s first term as representative for District 120 in the North Carolina House, she added: “Kevin has brought a lot of attention to the true Western North Carolina.”

“Once they can see the legislative region, they can understand so much better.” 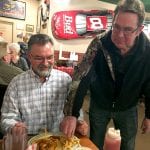 After brazenly snatching a French fry from his friend, Karl Gillespie’s plate, Corbin expressed appreciation for the full room of supporters present dangerously close to kick-off of the NCAA College Football National Championship game Monday, as well as the hundred or so who packed the Macon County Courthouse for his swearing in ceremony.

“He was instrumental in speaking with Speaker Moore and getting us some funding,” said Sheriff Robert Holland, who was master of ceremonies at the courthouse, and who – unlike Corbin – kept his tie and jacket on to greet supporters and eat barbecue.

Holland said some $68,000 allocated in legislation pushed through by Speaker Moore helped pay for body and in-car cameras. The sheriff is hoping Corbin can help him get the rest of the several hundred thousand dollars in funding he needs to fully equip his officers with cameras that help ensure proper procedures, gather valuable crime scene evidence and protect officers against false accusations.

“Having him there in Raleigh as a representative, they know where we are,” added the sheriff.

Basking in the fellowship of his supporters, Rep. Corbin acknowledged his first term had been a learning curve.

“It’s going to be easier my sophomore term, easier to get things done,” said Rep. Corbin, adding that he hopes to build on what was accomplished, including restoring education funding to pre-recession levels and supporting insurance-related legislation.

Nonetheless, Rep. Corbin touted nearly two dozen “Wins for WNC,” as the hand-written message across the top of his swearing-in speech notes reads. The list includes $1.5 million in recurring funds for small K-12 schools for Macon County, an additional $100 million in Lottery proceeds added to the capital budget and a one-time allocation of $35 million to Western Carolina University.

This week, Corbin plans to meet with Georgia State House legislator John Carson to discuss a distracted driver bill that he intends to title “Hands-Free NC.”

“It’s hard to tell what people are doing on their cell phones,” Corbin said of the dangerous epidemic of texting drivers. The legislation he hopes to model off Georgia’s example would make it illegal to be holding a cell phone while driving.

“There should be a flat amount per county of upfront money,” he said, noting that otherwise about 50 percent of education funding would be destined to the counties surrounding Charlotte, Raleigh and Winston-Salem. Corbin said the current system “cripples small school systems” in rural areas.

A proud Beth Corbin, who organized the event, kissed her husband’s arm before drawing him away to socialize with other guests. In the coming term of competing interests, Corbin will need more than fall-off-the-bone barbeque to keep everyone satisfied. 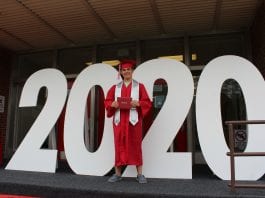 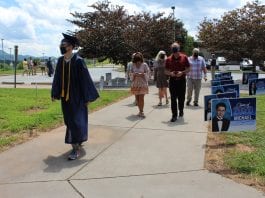