“Life is all about perspective.”

Like Walt Disney’s fictional Bambi, fawns by the hundreds lose their mothers annually for various reasons, primarily cars, predators, and disease. Yet, two women in Macon County are licensed to rehabilitate orphaned fawns so they have at least a chance at survival. Although only about  50% do survive rehabilitation in a human-run environment, both Cindy Meier and Colleen Behan believe those odds are worth the effort.

Meier has been rehabilitating fawns in Macon County and surrounding counties for 13 years, while Behan, who mentored under Meier, is in her fourth year as a rehabilitator. Annually, the two women spend countless hours and funds, realizing that the deer they raise may eventually become injured, die, or get harvested. However, as Behan pointed out, every creature – if born – deserves a chance at survival.

Behan, who lives on six acres with her husband, Willy, rehabilitated 34 deer in 2020 at the cost of around $5,000. At least half “made it” to be released into the wild of their property, which includes woods, fields planted with deer-attracting native plants, and a small pond.

“After we release them, they stick around somewhat for about a year, but they usually join wild herds and either leave completely or only come around occasionally.”

Behan, retired from the military, said she “always wanted to rehabilitate deer.” She inquired with the forestry service and was given Meier’s name.

“I visited her and we became instant friends. I came home and told my husband, ‘We have to do it,’ so we built a barn, went through the application process, were inspected by the wildlife officer and biologist, got our licenses, and began taking in fawns. At first I thought we would have one or two a year.” She laughs. “No way. We have at least 20-plus a year.”

Meier acquired a passion for fawn rehabilitation when her husband, who passed in 2020, found a piebald fawn.

“Look what I found,” she remembers him coming home and saying. “We put it in the barn and some of our neighbors thought it was a goat. But then we found out it was illegal to keep a deer without a license. The wildlife officer told us rehabilitators were needed, so we went through the process to become licensed and have been doing it ever since.”

Behan also had a rare piebald deer. Unlike the albino deer, which has pink eyes, a pink nose, and pinkish hooves, piebald deer have normal brown eyes and nose with black hooves like a normal whitetail. However, their coloration is due to a rare inherited genetic defect that affects less than 1% of the white-tailed deer population – and is the result of a male and female deer both having a specific recessive gene. Yet, most piebalds display one or a combination of such conditions as short legs, an arching spine, and internal organ deformities. Thus, they are not able to be released into the wild. Meier’s piebald eventually left their property, while Behan’s stayed on their property and lived to 9 months old.

“We don’t get too upset when a fawn dies,” said Behan, “because it’s the natural cycle of things. It is sad, but we do what we can and that’s all we can do. It’s just not always successful.”

Both Meier and Behan work with area veterinarians, who provide some discounted services. Vets Brittany Biel and Jessica Scruggs are “super,” they agreed.

When fawns are delivered, via a wildlife officer, to their homes, they stay in a confined area for observation and to treat them for injuries, sickness, and pest infestations, such as fleas or ticks, as well as fly eggs, which eventually become maggots. Then they are taken to a barn area where they can move around and be bottle-fed, and eventually the barn door is opened to a lush play area mirroring the habitat in which they will eventually be released. After four to seven months, when a fawn is ready to be released into the wild, the two women first spend time letting them out of the fenced enclosure for segments of time, and then gates are left open so they can go in and out of the barn area. Eventually, the young deer leave altogether.

“After they are off the bottle, we make sure they have plenty of different native plants to eat so they are not always seeking food like hay or grain,” said Behan.

“We put so much time into it,” said Meier. “You have to be dedicated to do this. But it’s worth it to know you helped them, and to just enjoy being around them.”

“Our lives, from spring to fall, center on the fawns’ eating and rehabilitation schedules,” said Behan.

Very young fawns must be fed at least five feedings a day – special formula in a bottle – from 8 a.m. to 9 p.m. As they begin to eat more grain and native plants, the feedings are reduced gradually over several months.

Both women, in fact, would like to see more people become licensed in the area so that more people are rehabilitating fewer fawns, instead of a few people maintaining the bulk of the load. However, Meier and Behan also warn people who try to skirt the law and attempt to raise a fawn – or any wild animal – without proper training and licensing. 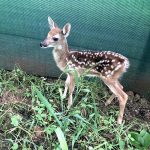 “You cannot take the wild out of deer, or other animals for that matter,” said Behan. “I have known people to try to raise a fawn in their home and allow it to sleep in their bed and hang out with the family dogs, and then when it gets older, it is going to exhibit its instincts. They are cute when little, but can be dangerous when adults.”

She noted such examples as during rutting season when a male might want to spar or rear up.

“Males especially can get aggressive, and it doesn’t matter if they were pets or not.”

Plus, the two women cautioned that treating a fawn like a pet means they will not survive in the wild.

Rehabilitators do not allow family dogs to come in contact with fawns or too much picking up and petting by strangers. Meier explained that wild deer need to maintain a healthy fear of humans and predators so that they can survive in the wild.

The Behans maintain several cameras on their property, and put out hay and corn – mostly during winter months – so they are able to identify some of the deer, due to particular markings, that they rehabilitated.

Annually, local fawn rehabilitators host a yard sale to raise money for food and medicine. For more information regarding how to assist financially with wildlife rehabilitation efforts, contact Behan at colleenbehan2013@gmail.com. People can also donate Tractor Supply gift cards since much of the fawn’s food, and other supplies are purchased there.