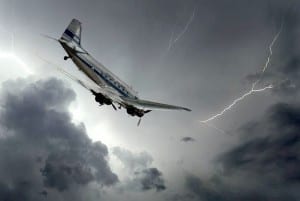 Retired Delta Airline Captain Marc Sharp addressed the monthly meeting of the Macon County Aviation Historical Society on Tuesday, Feb. 16. Captain Sharp retired from Delta after flying for them for 31 years and logging more than 30,000 hours in the air.  He started flying when he was 15 years old. By the time he was 18, he had obtained his commercial pilot’s license and was also a flight instructor. He was a flight examiner at 23, administering flight examinations and administering both personal and commercial pilot licenses.

The focus of Captain Sharp’s remarks was on aviation accidents, their causes and results, and possible solutions for them. He said that the greatest number of accidents were weather related, followed by pilot error and mechanical failure.

Capt. Sharp mentioned a number of severe weather conditions dangerous to aviation along with improvements made to the airplane’s systems to counteract the adverse conditions. Changes have been made to traffic control procedures in some cases to correct some issues.

One of the most serious issues has been icing situations that occur in high altitude flying and in difficult winter weather conditions. Icing conditions have been dangerous to the sensors that feed information to the auto pilot of an aircraft.  One such incident happened to a French jet, causing it to crash. As a result of this catastrophe, heaters were put on the sensors to prevent them from freezing up. In this incident, the pilots were powerless to disable the auto-pilot and possibly divert the disaster. The systems were re-engineered to allow the pilots to regain manual control of the aircraft.

Another instance occurred when a Delta L 1011 was attempting to land at the Dallas-Fort Worth airport and was caught in a microburst causing it to crash, killing most of the passengers and one person on the ground.  As the plane was approaching the runway, it was fighting 60 mph headwinds until it came under the push down from the microburst. As the pilots were fighting this situation, they came out of the microburst into 60 mile per hour headwinds, causing the crash. Capt. Sharp said that if the pilot has asked the tower for permission to abort the landing and go into a holding pattern, the crash may have been averted because the weather was clear 15 minutes later.

Sharp told of two incidents that happened to him that were indicative of the strange things that can happen while flying.  When he was young, he was flying a charter in a Cessna 170. The trip was uneventful on the way to their destination, but on the return flight, the engine began to cut out. He did everything he knew to do but nothing worked. Then he had to make the first emergency landing of his flying career ― where else but in a grassy cow pasture. When he got out of the plane to troubleshoot the problem, the first thing he did was to open the gas tank to be sure he had fuel.  When he removed the gas cap was under pressure, spewing out at him.  When he examined the gas cap, he discovered that mud dabbers had taken up residence, stopping up the cap’s vent, keeping the fuel from feeding properly.  This insect invasion seemed to have taken place at the airport while they were waiting to make the return flight home. 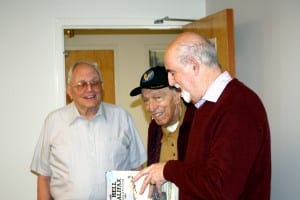 Another hair-raising incident he faced was on a take-off.  He was behind one of the monstrously heavy Boeing 707s in the smaller Delta jet.  As soon as the 707 cleared, the tower gave him clearance to take off.  Everything was progressing smoothly as he lifted off. Then about 250 feet off the ground, his aircraft suddenly listed as if it were trying to do a barrel roll.  He and the co-pilot were literally wrestling with the plane when it, just as suddenly, righted itself.  A combination of weather and air turbulence from the heavy 707 had created a vortex that the smaller Delta had been caught up in. (A vortex is, in layman’s terms, a horizontal tornado.)  As a result of this occurrence, a new regulation mandated a two-minute time lapse before take-off behind a big, heavy airliner.

Over the years, the airline companies had implemented many equipment and regulatory changes to improve the safety of the ever increasing amount of air traffic.  The most important seems to be the willingness to build $1,000,00 flight simulators to train pilots for their multi-million dollar airplanes.  They are also able to use the black boxes from crashed planes, to recreate the crash circumstances and, hopefully, from the information help avert future accidents.

School board names principal, teacher and support person of year