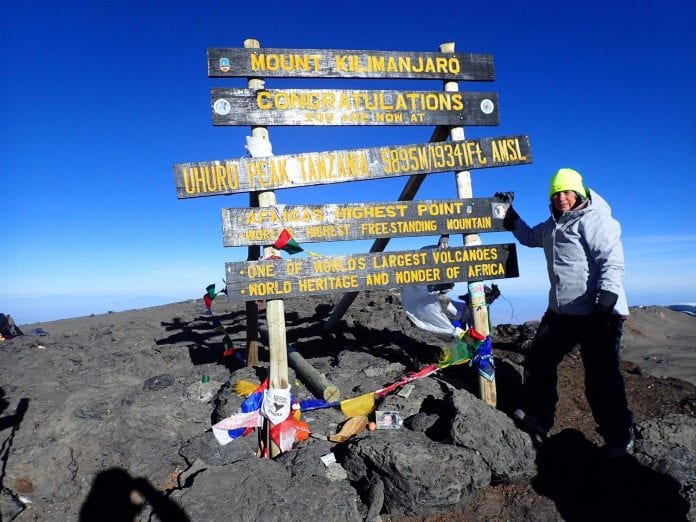 Barbara Mangold enjoyed a busy career in law enforcement for 35 years. But soon after she retired in 2014, she realized she needed new challenges. The ultimate challenge presented itself in February when she climbed to the Uhuru summit of Mt. Kilimanjaro. “I did not know why I wanted to do it, but afterwards I realized that I still need adventure in my life.”

Mangold, who recently turned 61, said the climb was difficult but worth it. “I feel a great sense of accomplishment.”

Mangold linked up with the husband/wife team of Awesome Climbs, Steve and Jenne Fromm, based in Clermont, Fla., where she resides part of the year. They schedule at least two Kilimanjaro climbs annually that they describe as, “A nine-day, life-changing, summit-seeking adventure created to help you find your best self.”

Even though Mangold participated in Cross Fit, she signed up for the Awesome Climb’s 20-Week Successful Summit training plan, which she said was “immensely helpful.” When at her seasonal residence in Franklin, which she has owned since 1985, she trained with Lauren Villanti, her personal trainer at Franklin Health & Fitness.

“All of it helped me with my endurance,” she said.

Although no mountain climbing equipment is necessary to climb Mt. Kilimanjaro – just poles, backpack, etc. – the climb is steep in some areas and the altitude is an issue.

Mt. Kilimanjaro is the highest mountain in Africa, in the region of northeast Tanzania, with its summit at 16,100 feet from its base and 19,341 feet above sea level. The mountain is a large stratovolcano composed of three distinct volcanic cones, two of which are extinct but one is considered dormant and could erupt again.

Comparable to Mt. Kilimanjaro in the United States is Denali (also known as Mt. McKinley) in Alaska. At 20,310 feet, Denali is the third most topographically prominent and third most topographically isolated summit on Earth after Mount Everest and Aconcagua. It is the highest mountain in America. However, the climb success rate of Denali is only 50 percent due to its altitude, weather, and extreme temperature.

The Awesome Climb group of 10 flew into Kilimanjaro International Airport; nearest town is Moshi. Hired to accompany the group are local guides and porters whose main jobs entail assisting with gear and keeping participants safe. Some of the porters hiked ahead of the group each day to set up tents. Guides also conducted mandatory health checks twice daily. Heart rate and blood oxidation levels – as well as hydration – were main concerns.

One aspect of the trek Mangold found interesting was the biodiversity. The group essentially traverses through five climates: a lush rain forest, sparse rocky landscape, desert-dry conditions, barren volcanic ash landscape, and ultimately close to snow-covered peaks. While the temperature was about 60 degrees F in the rainforest, it dropped the higher they climbed.

“We didn’t need jackets at first, but by the time we got to the summit I had all the clothes I brought with me on, plus a coat.”

Every day involved a personal development goal – “lessons along the way,” said Mangold. For example, at the end of one day, the group discussed the important life lesson involved in taking one’s time. “Some days were definitely harder than others; each day was different.”

Just on the first day, the group trekked about seven hours and climbed gradually from an elevation of 5,380 feet to 9,350 feet. Once they reached 15,000 feet, the group descended and ascended a few different times to give their bodies a chance to adjust to the altitude. “The phrase is climb high, sleep low,” she explained.

Cleveland Clinic explains symptoms of mild, short-term altitude sickness can include dizziness, fatigue, shortness of breath, loss of appetite, sleep problems, and a general loss of energy. More moderate symptoms are diarrhea and/or vomiting and confusion. Altitude sickness becomes an emergency situation when there is fluid buildup in the lungs and/or brain because the body does not have enough time to adapt to the lower air pressure and lower oxygen level in the air at high altitudes.

Mangold said she experienced some mild symptoms, and three in the group did not reach the  Uhuru summit, but instead had to stop at summits in other spots.

“While you’re doing the climb, you just take one step at a time and concentrate,” she said. “My body and mind were challenged. Every day we looked at the summit and said, ‘We’re coming for you.’”

It took five and a half days to reach the summit. “We were woken up at 11 p.m. and started our summit climb with headlamps,” said Mangold, explaining the reason for the night hike as: “It’s an eight hour climb for one; secondly, they want you to experience the sunrise, and they needed to time it around other hikers in other groups who are coming. You want to be mostly with just your group there at the top. We reached Uhuru Peak at 7:45 a.m. The views were amazing!”

To return, the group took a shorter one and a half day descent route.

Another highlight was interacting with the guides and porters. “They were just the nicest men,” she said. “If they saw someone start to get tired, they would stop and make us sit and hydrate or eat to get energy. We learned some about their culture and that was interesting.”

Although Mangold’s husband, Duke, of 34 years, did not accompany her on the trip, he was her “cautious” supporter. “He was kind of proud of me.” When she returned, he told everyone about her accomplishment and even placed a congratulatory advertisement in The Macon County News.

She added, “I think that what made me so successful was the preparation and help ahead of time. Even Outdoor 76 outfitted me with the right clothes, shoes, etc. It’s an important lesson – to be well prepared no matter what you do in life!”

Stay-at-Home orders prompting some to try hand at gardening