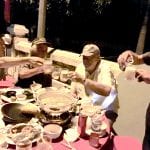 “Back then, the sky was just about as blue as it could be, and those mountains between them were very similar with this area,” recalled Franklin-born Army gunner Rick Norton, 73.

But Vietnam felt different. There was fear in the eyes of the children. There was no happiness.

Norton made two trips back to Vietnam because he wanted to see a different Vietnam than the one he knew as a soldier. He wanted to see children smiling, people happy and most importantly, the absence of the fear that pervaded when he was stationed in the country.

That’s why he returned in 2018. When he went back for the second time this past March, it wasn’t so much about his healing, but about giving back.

“I did enough bad out there, I figured I’ve got to do some good to cancel it out,” he said, telling his story over a cup of black coffee in downtown Franklin shortly after his April 3 return.

Norton’s first visit coincided with the 50th anniversary of the Battle of Landing Zone Brillo Pad in the Central Highlands, which he helped to defend from his valley outpost at Polei Kleng.

On the March 26, 2018, anniversary visit, he made friends with the North Vietnamese Army (NVA) 209th Regiment soldiers who were once his enemies.

Relationships forged over Tiger beers and rice wine a year ago grew stronger this past March, when Norton again visited the cemetery where more than 400 NVA bodies rest.

“I’m responsible for putting a bunch of those guys in that cemetery, no doubt. No doubt,” said Norton, whose M107 175 mm self-propelled gun had a firing range of 25 miles and would lob heavy shells into enemy territory.

Norton could not see the results of his artillery shells, but he knew they did not just kill enemy combatants.

“What’s bothered me all these years is, how many of those little villages and hamlets did we blow all to hell that were full of men and women and children who didn’t have a thing to do with that war?” he asked rhetorically.

Donating musical instruments to local indigenous tribes in Kontum province and visiting and making donations to an orphanage have helped Norton to give back, to make amends for the innocent people who died in the war. This year, Norton collected $1,000 from fellow veterans at the local Vietnam Veterans of America chapter #994.

Norton is winning the biggest battle of them all, the one with his internal demons.

“When I went back the first time, it was for me. It was to help me heal,” he said. “I still had a lot of issues and private doubts and thoughts about my actions in the war and all that transpired, and I wanted some closure and that’s the reason I went back. And I got all that.”

Norton said the journey is not for everyone, but it has been for him.

Norton bonded with one NVA infantryman in particular, who he came to know as “Luc,” even joking now that he’s the reason why the U.S. withdrew from Vietnam.

“I tell him he’s the reason they won the war. He was so small, we shot up all our ammo trying to get him, couldn’t get him,” Norton said with a laugh. “But don’t get into a drinking contest with him, I’ll tell you that right now.”

Norton is not sure when he might go back, but he says he has created ties with the beautiful people of Vietnam.

“I speak about Vietnam now with a good feeling rather than a bad one that I carried for a long, long time,” he said. “Going back has helped me much, much more than VA psychiatrists have dealing with my personal demons.”

Asked what was going through his mind after visiting Vietnam, Norton said, “Good things. Happy things. Good thoughts because I was satisfied with what I saw. I was happy from what I saw.”