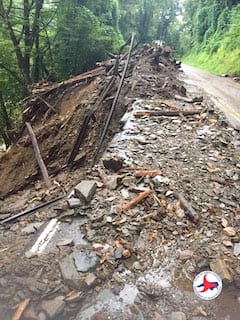 N.C. Department of Transportation crews worked around the clock on U.S. 19/74 to open the highway through the Nantahala Gorge closed by mudslides.

The road was reopened to traffic on Tuesday evening.

“Slides one, two and three had no structural damage to the road, but at slide four, we need to build it back and that should take two more days,” Division 14 Maintenance Engineer Wesley Grindstaff said. “We will be working 24 hours a day because this is a critical roadway.”

Three locations were cleaned by Monday morning in time to begin repairing small sections of guardrail and patching asphalt in spots.

The largest site — where the debris flow washed away 80 feet of guardrail and shoulder while rocks broke limbs 25 feet above the road — requires additional repairs.

Two excavators dug out loose soil beside the road Sunday morning and began rebuilding the embankment between the road and the river Sunday afternoon. Crews would work two more days to rebuild the support, the road surface and safety features.

NCDOT crews from four counties — Cherokee and Graham from the west, with Swain and Jackson from the east — on Saturday night. They cleared a path to remove between 12-15 vehicles that had been stuck between slides around 12:30 a.m. on Sunday morning.

Engineers arrived on site at sunrise Sunday to assess the damage and develop the plan employees are enacting now. Early estimates indicate that repairs will cost around $500,000.

“Sometimes we’ll be out here cleaning up a little mud or small trees in this gorge after rain events,” Grindstaff said. “But nothing like this. With an average of 4,500 cars per day on this road — there’s more in the summer and rafting season — we know how important is to get the road open quickly.”